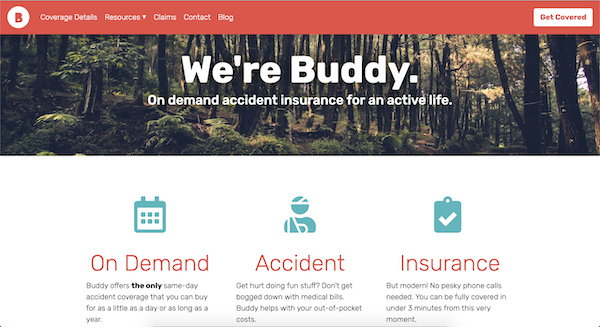 Charles Merritt, Jay Paul and David Vogeleer launched the company in late 2018, offering its policies only in Arizona – the first state whose department of insurance approved their model.

Merritt describes the concept as, “We provide cash when you crash.” 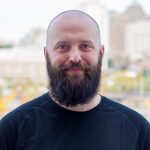 “Which means you can get accident benefits if you need medical attention. Instead of having to buy an annual plan, you can buy just a day, a weekend or week of coverage,” he said.

Vogeleer and Merritt’s backgrounds are in design and marketing, while Paul has 25 years of experience in the insurance industry. After meeting while working on a project at the Martin Agency a few years ago, the trio, who are all outdoor enthusiasts, eventually hatched the idea for Buddy.

“We realized that all of a sudden, four or five years ago, we got a lot of requests to contribute to Gofundme campaigns for our friends when they got hurt,” Merritt said.

“We figured we could create something to address that problem ahead of time.”

Lloyd’s of London, based in United Kingdom, underwrites Buddy’s insurance policies, which lack deductibles. For an example of coverage costs, a plan for someone who mountain bikes and kayaks would cost $9 for a single day, $20 for a week or $55 for a month.

“For our policies we have no deductible and we just write you the check directly based on what injury you’ve had and how it’s treated,” Merritt said. “We have benefits for urgent care, emergency room and hospital visits, and those benefits increase based on what’s happened to you.” 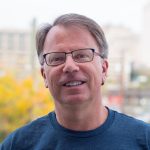 He added that Buddy also has policies that pay benefits for ambulance rides and physical therapy.

Policies are available through Buddy’s website, and Merritt said they’re also integrating their coverage with other organizations that host events, similar to travel insurance companies’ coverages.

“We basically plug into their registration and signup processes. So if you’re registering for a mountain bike race in Arizona, we become a checkbox as part of that registration process,” Merritt said. “I look at the model of travel insurance as a good first step for us.”

He said the company has applied to go live in Virginia; that timetable depends on what it hears back from the Department of Insurance.

“It’s very difficult to forecast,” he said of the Virginia application process. “They could notify us today that we’re approved, or they could send 50 objections. You just don’t know … (but) we should be able to cover people for all their summer vacations and adventures,” Merritt said. 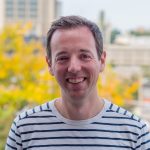 Buddy has a staff of seven at its office in Capital One and Startup Virginia’s 1717 Innovation Center in Shockoe Bottom. Merritt also said they’re amid a fundraising effort, but didn’t disclose details.

The local insurance technology scene has been growing with startups such as Pogo, Merlinio and Fenris Digital launching in recent years, joining established players such as Compare.com, which recently raised $35 million in venture funding.

So do they cover both injuries as well as equipment?

Hey Brian, we provide cash benefits if you’re injured, and they are paid directly to you. You get to choose how to use them. We’d love to cover gear in the future!