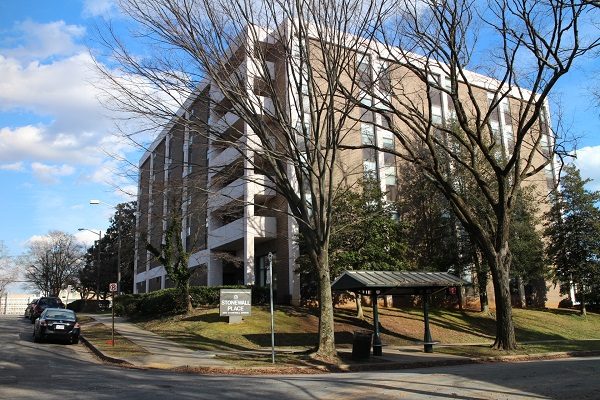 The Stonewall Apartments at 1920 Stonewall Ave. near Manchester are slated to be rehabbed. (BizSense file photo)

The Richmond Redevelopment and Housing Authority announced last week it has selected New Jersey-based The Michaels Organization to rehab 11 properties scattered across the city totaling 553 apartments. It’s part of an effort to transition those units from public housing to private landlords, which then would use a project-based voucher program to rent units to Section 8 residents.

A contract award amount was not disclosed, but the RRHA has projected the rehabs to cost as much as $35 million, to be covered by low-income housing tax credits and other funding sources that the developer is expected to secure.

Calls to RRHA and Michaels for specifics about the arrangement were not returned. CEO Damon Duncan, who was installed in late March, did not respond to repeated requests for comment. 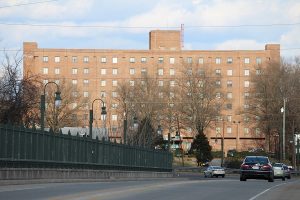 As the units are rehabbed, they will be converted from public housing to a project-based voucher program, in which rental income is transferred to a voucher for those receiving Section 8 benefits that stays with a particular property. Any residents relocated to accommodate the rehabs will be allowed to return to their units once construction is completed, RRHA said in the announcement.

RRHA manages the properties on behalf of the federal government, which owns them. The U.S. Department of Housing and Urban Development is providing avenues for housing authorities to convert public housing and secure funding for such projects from the private and public sector. 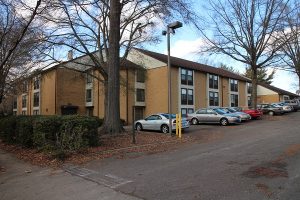 The conversions are being done through HUD’s Rental Assistance Demonstration program. RRHA is using the same program, called RAD for short, for its three-project effort to provide replacement housing for residents of its Frederick A. Fay Towers, near Gilpin Court.

The under-construction Jackson Place, a $32 million mixed-use development by RRHA and Washington, D.C.-based Community Preservation and Development Corp., is one of the three projects planned to replace Fay Towers, the fate of which has yet to be determined.

The other two projects, likewise collaborations with CPDC, are the completed $11.4 million conversion of the old Highland Park Public School into 77 senior apartments, and the planned conversion of the former Baker School building next to Gilpin Court into 48 senior apartments. Work on the Baker School project has been targeted to start this month.

As construction continues on Jackson Place, RRHA is set to select a developer for a continuation of that project across Second Street – a selection that has prompted increased scrutiny in recent months from residents and business owners in the surrounding Jackson Ward neighborhood.

That development, referred to as a second phase of Jackson Place, would fill 3.4 acres in the block bordered by Second and Third streets between Jackson Street and the interstate. The RFP for that project calls for additional mixed-use buildings with 63 housing units above 2,500 square feet of commercial space, along with a 115-room hotel. 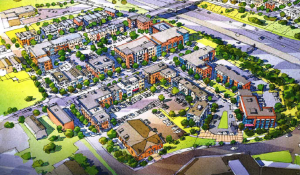 A conceptual rendering of the development envisioned for the two blocks. (Courtesy of RRHA)

At a recent meeting of the Historic Jackson Ward Association, several attendees, including City Councilwoman Kim Gray, whose district includes the first phase of Jackson Place, questioned RRHA officials about whether those second-phase plans would be honored in light of two responses received for the RFP, one of which they said proposed a previous plan to fill the site with 200 income-based housing units.

Gray argued that the higher-density proposal, which RRHA officials would not confirm or deny receiving, is aimed at fulfilling part of the housing component of the proposed redevelopment of a nearby 10-block area surrounding the Coliseum. That project, proposed by NH District Corp. and endorsed last fall by Mayor Levar Stoney, calls for 2,800 new housing units, 680 of which would be income-based.

In an audio recording of the meeting provided to BizSense, Gray maintained that zoning that council approved last fall to accommodate the second phase, while structured around the plans in the RFP, would still allow for 200 units if such a proposal was endorsed. Orlando Artze, RRHA’s interim CEO at the time, responded that while they could not discuss the proposals in detail, any talk about a decision having been made was incorrect.

“If it was presented by anyone as a done deal, it is not,” Artze said in the recording. “A decision hasn’t been made. We’re still considering the proposals.”

At the meeting, which was held days before Duncan started as CEO in late March, Artze said RRHA was aiming to make a decision on the proposals in the next four to six weeks. He previously told BizSense, in an interview in January, a selection was anticipated to be made in March.

Meanwhile, a decision on another RFP also looms, as RRHA is preparing to select one or more developers for 96 single-family homesites it is looking to unload in the city’s Blackwell neighborhood.