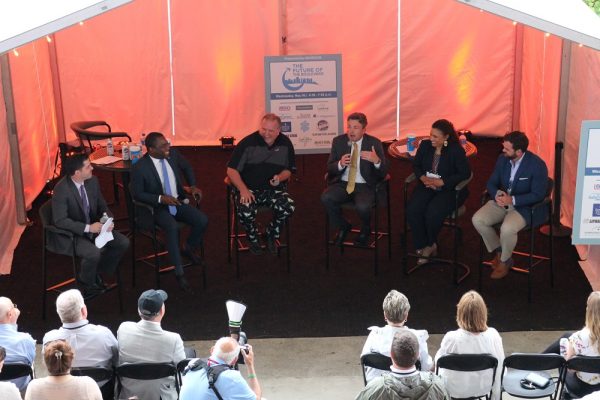 Nutzy the Flying Squirrel was among hundreds of attendees who filled the ballpark’s Funnville Fan Zone plaza for BizSense’s Future Of: The Boulevard event, which featured a panel discussion about the fate of The Diamond and the economic potential of the land surrounding it. 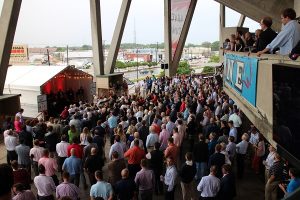 Questions ranged from the development potential and value of the 60-acre city-owned site, which Richmond leaders have eyed for years as a prime location for economic development if the aging ballpark was moved to another site, to the Flying Squirrels’ and VCU’s commitment to a new ballpark and how the city can go about achieving such projects.

Basham, whose development firm has been active in the booming Scott’s Addition neighborhood across the now-named Arthur Ashe Jr. Boulevard, stressed that a firm plan is the first step forward.

“If we can figure out where this baseball stadium is going, the private sector has been chomping at the bit for 15 years to come in here and make private investment in this area, and I believe that will continue,” Basham said.

“I will just say, we have a window. If we take too long to come up with this plan and to move these dominos forward, then we may have to wait another 15 years.”

The Commonwealth and VCU sports present the creation of a new ballpark on the ABC site as a fait au compli, but there has been no best use study for the site, or of how its development as a ballpark will impact the viability of the remaining 60 odd acres of city property. Further, no consideration has been given to how a new sports venue, purported to include a concert venue, would impact the adjacent residential neighborhood, one of Richmond’s oldest and most stable urban residential neighborhoods dating back to the 1890’s. Over the years rumors have abound and swung… Read more »

I agree with you Hampton that we need a open and public planning process but to say the site has not been studied is a false. It has been studied and studied and studied every 3-5 years since about 1999. The last was in 2015 http://www.trippumbach.com/city-richmond-va/ . The problem is between the City’s slow Master Plan update (started in 2016 and done by 2021), the fact that each administration has a “use” and tried to steer the public input to their will (and all failed), and the fact that the stadium move is still not final and 2-3 years off… Read more »

Thanks Michael. I would suggest that the word “study” is a perhaps a relative term. The Trippumbach study was woefully inadequate and as you say guided by a “use” and preferred outcomes. There has been no agnostic “study” or master planning of the acreage minus the influences of baseball or significant local influencers. The significance of the opportunity is deserving of a serious programatic undertaking. Yesterday Mayor Stoney implied that such an effort was warranted. Let’ see what happens.

What a disappointment ! Nothing NEW was presented at the meeting. I believe that Eddy Mac, the VCU Athletic Director, made a comment about the value that stadiums added as an economic development generator. I have studied this since 2003 and have found that the only successful stadium developments were the ones privately generated ( ie: The Atlanta Braves, San Francisco Giants, Dallas Cowboys, and New England patriots). The ones that have been financed with public money have been economic drains. The best, closest to home example, is the relocation of the Richmond Braves to Gwinette County Georgia. The County… Read more »