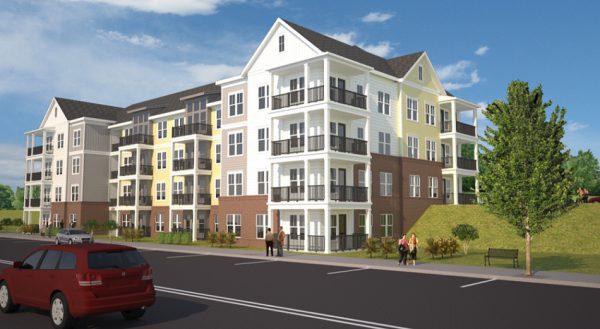 Construction on the Commonwealth Apartments is slated to begin in September and include 226 units. (Courtesy Poole & Poole Architecture)

One of the area’s most active apartment developers has the land in hand to take another bite out of Chesterfield.

Guy Blundon’s CMB Development this month purchased 11 acres at 5411 Commonwealth Centre Parkway near the Route 288 interchange for about $5 million. That’s about $450,000 an acre.

Blundon placed the property under contract last summer, announcing then his plans to convert the wooded lot into a new apartment project.

He’s aiming to begin construction on the project – dubbed Commonwealth Apartments – in September. Plans call for 226 market-rate units across eight buildings that will include a mix of two 4-story buildings, two 5-story buildings and a one 3-story building because of the topographical grade of the property. The remaining three buildings would include residential units above a garage, Blundon said. 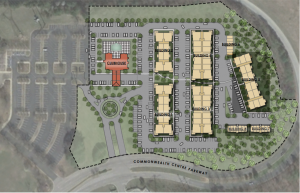 226 market-rate units will be constructed across five buildings.

Site amenities will include a 5,500-square-foot clubhouse with fitness center, as well as a pool, volleyball and bocce ball courts, and a dog park. The development also will include several trails, with plans to tie them into the area’s pedestrian network that leads to existing retail and restaurants in the vicinity.

While Blundon could not disclose an average rental rate for Commonwealth Apartments, the average rent for a one-bedroom unit in the county’s Brandermill section is about $1,200 a month; while a two-bedroom fetches about $1,600.

The seller in the land deal was EDC, a Richmond-based construction firm. The property most recently was assessed by the county for $788,000 and it sits next door to the Commonwealth Centre I office building.

Purcell Construction is the general contractor, while Poole & Poole Architecture designed the apartment project. Towne Engineering is the civil engineer.

Newport News-based Drucker & Falk will manage and lease the property once completed.

Commonwealth Apartments adds to CMB’s growing multifamily holdings in the vicinity, and its first in the Brandermill section of the county.

Blundon and Purcell also teamed up on The Winterfield at Midlothian apartments, a 238-unit complex beside Blackwood Development’s Winterfield Crossing along Midlothian Turnpike that’s slated for completion next month.

A big thank you to Austin for bringing me into the listing of this property. It was hotly pursued by the development community for its tremendous location and access. Blundon and Purcell have become quite the team and they were the right combination for this deal. Tom Eilerson was a wonderful client throughout the process, working the rezoning with the Planning Department.