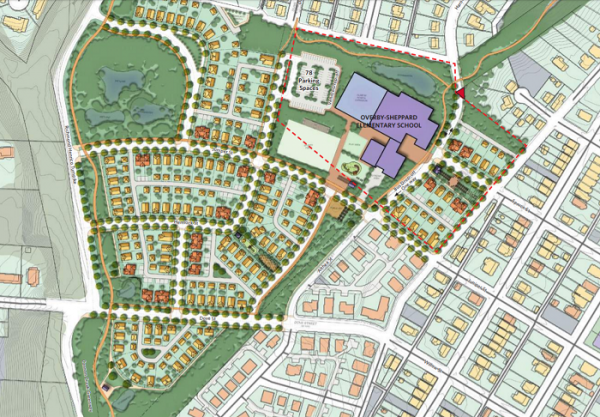 A site plan for the next phase of Highland Grove. (Courtesy Urban Design Associates)

A years-in-the-making transformation of a section of Richmond’s Northside is about to enter its second and final phase.

Richmond Redevelopment and Housing Authority, and Richmond Public Schools, have submitted plans for the next phase of Highland Grove, a collection of apartments and townhomes filling the area around Dove Street between First Avenue and Richmond-Henrico Turnpike.

A request before the city planning commission today (May 20) would authorize a preliminary community unit plan for the phase, which would consist of between 139 and 155 new homes on about 40 acres primarily beside Overby-Shepherd Elementary School, the site of the former National Guard Armory.

Overall, Highland Grove represents a redevelopment of the former Dove Court public housing community, and the former privately owned Carrington Gardens and Northridge Apartments, which RRHA and city officials had described as blighted. 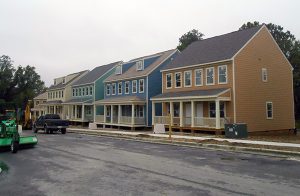 Some of the existing apartments at Highland Grove. (BizSense file photo)

In their place thus far are dozens of buildings containing 128 income-based rental units, including one-, two- and three-bedroom apartments and townhomes with porches and balconies. The second phase would add at least 139 more units, including single-family attached and detached dwellings, with a maximum of 155.

Phase two also would include common areas and open space, an extension of Harold Avenue and a public street and alley network, and renovations to the elementary school. A portion of the school site would be allocated for part of the development.

The plans are detailed in a 2017 document drafted by Pittsburgh-based Urban Design Associates, which RRHA also has worked with on its in-the-works second phase for Jackson Place in Jackson Ward. Other firms involved in Highland Grove phase two include locally based Timmons Group.

Documents submitted to the planning commission do not specify price points or an overall development cost. Calls to RRHA were not returned Friday afternoon.

The first phase, completed in 2013, was developed in collaboration with Charlotte-based Laurel Street Residential. Georgia-based NorSouth Constructs was the general contractor, and Commonwealth Architects designed the homes. S.L. Nusbaum Realty was in charge of leasing and property management.

Highland Grove adds to other signs of investment and revitalization in the area. Nearby at Six Points, RRHA worked with Washington, D.C.-based Community Preservation and Development Corp. to convert the former Highland Park Public School building into senior apartments. CPDC also is working with RRHA on the first phase of Jackson Place and a planned redevelopment of the former Baker School building next to Gilpin Court.

RRHA recently selected New Jersey-based The Michaels Organization to rehab 11 properties across the city totaling 553 apartments as part of an effort to transition those units from public housing to private-landlord ownership.