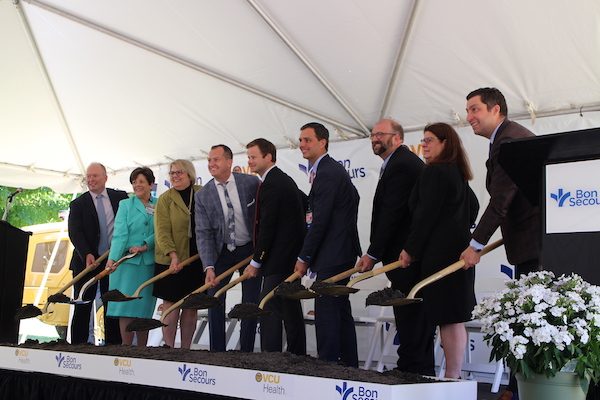 The transformation of a West End landmark officially has begun.

On Tuesday Bon Secours, VCU Health and Thalhimer Realty Partners broke ground on the redevelopment of the Westhampton School property at 5800 Patterson Ave.

Thalhimer is leading the $53 million mixed-use redevelopment of the city-owned property that eventually will house 129 apartments, a three-level parking deck, retail and office space, and an outdoor plaza. 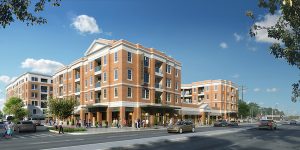 The new development is slated to include 129 apartments. (Renderings courtesy Bon Secours)

Bon Secours and VCU Health also are building a separate, 55,000-square-foot outpatient pediatric facility on the property along Libbie Avenue.

The plan calls for razing one of the two buildings on the site, while preserving the older one, which was built in 1917 and sits closer to Libbie Avenue. The development ultimately will consist of more than 250,000 square feet.

A rendering of the planned pediatric facility along Libbie Avenue.

The 6-acre property’s future was often a point of contention in the West End in recent years, with many residents voicing concerns about added traffic from a possible redevelopment. Bon Secours agreed to fund a traffic study, which the city is using, ahead of issuing permits.

The saga began in 2013, when Bon Secours signed a 60-year lease on the city-owned school as part of the deal then-Mayor Dwight Jones worked to bring the Washington Redskins’ training camp to Richmond. The health system pays the city $5,000 rent per year, and has two 20-year options to extend the lease at the end of the 60-year deal.

The ensuing six years included scrapped plans for a Bon Secours nursing school, a request for proposals from the private sector and a rezoning of the property to UB-2 Urban Business District. 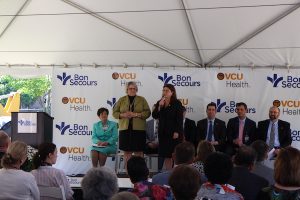 Bon Secours eventually selected TRP last year to lead the redevelopment. The real estate firm is now subleasing the property and plans to have the project completed by fall 2020. It has a March 2022 deadline per the terms of Bon Secours’ agreement with the city.

Bon Secours has waived its tax-exempt status on the property and pays the city about $111,000 per year in property taxes for the Westhampton School parcel. The health system projected last year that after the land is redeveloped, it will pay $636,000 in annual property taxes to the city. The property most recently was assessed at $7.9 million.