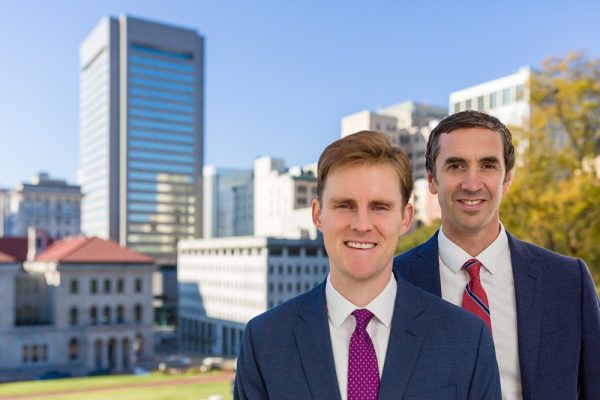 A partnership born out of the state attorney general’s office has led to a new downtown law firm.

ReisingerGooch launched May 1 in Shockoe Slip, run by attorneys Will Reisinger and Matt Gooch.

They got to know one another in recent years working at the Virginia Attorney General’s Office, first under Ken Cuccinelli and then Mark Herring.

Reisinger, 36, left the public sector for his own private practice in 2016, working mostly on behalf of renewable energy companies and trade groups on regulatory issues and other matters.

Gooch, meanwhile, had remained with the government, representing state agencies before Reisinger lured him out. He left the AG’s office this month to launch the new firm May 1.

“It’s liberating and energizing, and I feel more awake then I have in a while,” said Gooch, 40.

“We found that our practices overlapped with my regulatory background and Matt’s experience doing transactional work,” Reisinger said. “We decided to join forces.”

Their client base initially will be mostly private renewable energy companies around Virginia, with solar as a main driver. They’ll also keep an eye out for work representing localities on energy issues.

While solar is a hot topic presently, they said companies pushing into battery technology and energy efficiency likely will be among the next big things to bring work their way.

“We’re in a period where the energy system is changing so fast,” Reisinger said.

Gooch was born and raised in Oakton, Virginia. He went to Washington & Lee for undergrad and University of Richmond for law school.

The two-man shop is based out of the recently opened Novel coworking space. They said they’ll likely look to add an attorney within a year.

But in the meantime, they’re out hustling to build their book of business.

“We’re treating this very much like a startup,” Reisinger said. “We’re going to be out pounding the pavement.”