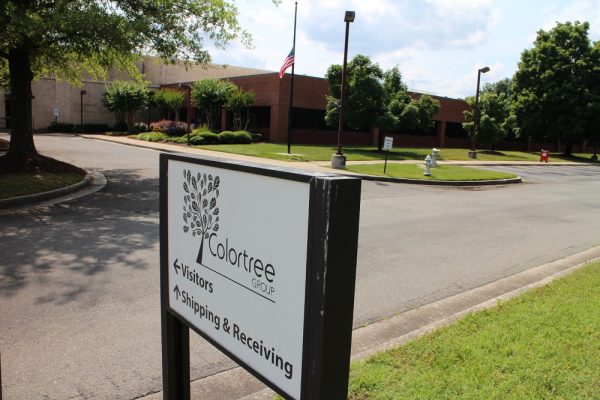 News of a local printing company’s sudden closure Monday is prompting other manufacturers, both here and across the state, to reach out with employment offers to the more than 200 workers who lost their jobs as a result.

Several employers in printing and other industries contacted BizSense on Tuesday hours after it broke the news that Henrico-based Colortree Group had closed its doors at 8000 Villa Park Drive, leaving 240 workers unexpectedly unemployed.

Among them was TemperPack, a local corrugated packaging company based in Manchester that said it has about 30 open positions it is looking to fill specifically with workers from Colortree.

Another call came from Berryville Graphics, a commercial printer near Winchester that manufactures hardcover and softcover books. HR manager Wanda Pairo said the 450-employee company has as many as 75 full-time positions that would likewise translate to Colortree’s former workforce.

Pairo said a supervisor alerted her to the news report, which she said not only prompted her call but also made her realize the challenge in trying to reach former employees of a suddenly shuttered company.

“When I first heard of the closure, I thought I’ll just reach out to the HR person at Colortree, but because of the details in the article, I realized that’s not happening because there’s no one there,” she said.

“In the print industry, finding skilled workers is really a struggle. I think it would be a win-win for both our company and also for the employees, because I know they’re concerned that they don’t have health insurance along with not having a job.” 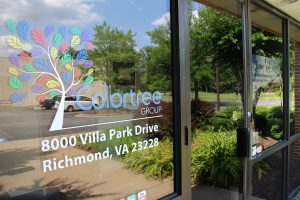 Some Colortree employees arrived to work to find the company’s doors locked.

Such concerns were shared with BizSense by some Colortree employees who arrived to work Monday to find the building’s doors locked. Some employees said they were given 15 minutes to clear out and the building was locked by about 1:30 p.m., following a conference call in which it was conveyed to employees listening in that the company was shutting down.

Whereas the campus appeared empty around 3 p.m. Monday, more than a dozen vehicles were parked beside the front entrance Tuesday afternoon, as was a Henrico Police car. An officer was stationed at the entrance to the building’s administrative area, which was secured behind an unlocked front door.

A man who met a reporter at the door said no one with the company was available to talk and that he couldn’t say what people were doing at the building.

Previous attempts to reach Colortree for comment were unsuccessful, with no response from CEO James “Pat” Patterson or others on Colortree’s management team. An email sent to eight people listed on the company’s website Monday as members of that team did not generate a response. By Tuesday afternoon, one member of that team, Vice President Eric Patterson, no longer was listed on the site’s management team web page.

A letter dated Monday and signed by Patterson was sent to the Virginia Employment Commission and the Henrico County Manager’s Office, alerting them of the closure in accordance with the Worker Adjustment and Retraining Notification Act. The WARN notice said Colortree was permanently closing “some or all of its divisions” and laying off approximately 240 employees. 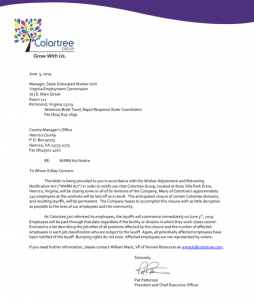 The WARN notice sent to Colortree Monday. Click to enlarge.

Vinny Abbott, who handles talent acquisition for Richmond’s TemperPack, described its 30 or so available full-time positions as likewise applicable to Colortree’s workforce, which he said he’d been eyeing for recruitment prior to the closure.

“There’s going to be a lot of carryover in terms of what they do from a production/warehouse perspective to what we do on our end as well,” Abbott said. “That’s actually one of the companies that was on my list of places to attract talent from to begin with, so a very unfortunate circumstance for them, but we can help them relatively quickly because we are growing rapidly.”

Open positions at the company include machine operators, production line positions, forklift operators, custodial staff, supervisors and managers. Abbott said pay ranges are based on experience and can vary from about $12 an hour to annual salaries of $50,000 and up. 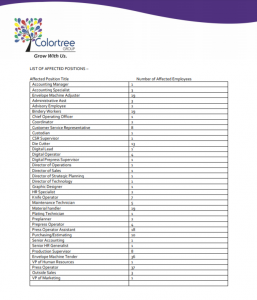 Founded in 2015, TemperPack makes temperature-controlled packaging materials for such things as meal kit deliveries and pharmaceutical products. The company, which recently completed a $22.5 million capital raise, has grown from 50 employees last year to 150 here and at a facility in Las Vegas.

Abbott said applicants can submit resumes to the company via email or its website. He said resumes also would be accepted in person Friday morning, from 8:30 a.m. to noon, at TemperPack’s Henrico facility on Carolina Avenue.

Pairo said Berryville Graphics conducts on-the-spot interviews and encouraged applicants to call, email or pay a visit to its facility in Berryville, east of Winchester.

Other companies are considering Colortree pickups as well. TJ Daly, president of Acorn Sign Graphics in Henrico, said his leadership team discussed the potential to talk to former workers in technical design or project management. Jimmy Keith, with Manchester print shop Keith Fabry, said he also is interested in talking with workers about job opportunities.

The WARN letter states “the Company hopes to accomplish this closure with as little disruption as possible to the lives of our employees and the community.” Obviously we don’t know the internal workings of this sad move, however, I think it’s safe to say that their employees will very much suffer disruption to their livelihoods. I’m thankful and encouraged to hear that TemperPack and Berryville are stepping up to offer good jobs to Colortree employees. Very cool to see an industry come together during hard times.

If they truly wanted to “accomplish this closure with as little disruption as possible to the lives of our employees and the community”, then they should have followed the law which states that a company with more that 101 employees is required to give 60 days notice of closure.

Stephen Gould is a door opener for any sales executives from Colortree who lost their position . We are located in Scotts Addition and hope I can help some folks! We are growing our sales team locally ( VA) and excited to speak to you. Please email me at [email protected] look forward to hearing from you.

Biba Letterpress Studio is currently interviewing for a Pressroom Associate position, primarily responsible for cutting paper and making plates for letterpress printing. The position will also assist the master pressman as needed. We’d love to speak to former Colortree employees. I can be reached at 866-540-7243 or via email at [email protected].

Any time we see a printer close their doors, it brings a harsh reality of the changing times in the nature print. We at Taylored Printing in Yorktown, VA truly send sympathies to the Colortree employees and their families. As we adapt to current trends in technology, we grow where needed. Taylored Printing is currently looking for qualified applicants for our expanding digital print division. Please see the attached link to see if you might fit a roll and pick up where Colortree left you.

we are a flexo label printer in Cheverly, MD, just outside of DC, looking to hire a flexo press operator. If there is anyone interested and capable of working in the DC area, let me know. We have 10” web and 20” web, 6 to 10 colors.

When one door closes, another one opens. Virginia Linen Service, Inc. is actively hiring for various positions (maintenance, sales, drivers, production, management, etc.) at several branches across the region. We are particularly interested in maintenance technicians. If you or someone you know may be interested, please don’t hesitate to reach out.