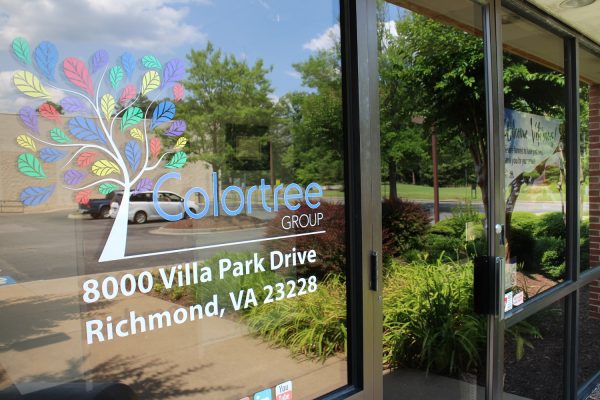 Colortree has 21 days to respond to the suit. (BizSense file photo)

A local printing company’s abrupt closure last week has prompted a class-action lawsuit brought on behalf of its more than 200 former employees, many of whom said they were not paid as expected Friday for days worked prior to the closure.

The lawsuit against Henrico-based Colortree Group was filed Thursday on behalf of Terry Kennedy, a prepress operator at the company for three years, and all other employees who likewise lost their jobs as a result of the closure June 3.

The suit alleges Colortree violated the federal Worker Adjustment and Retraining Notification Act and the Virginia Wage Payment Act by not providing the approximately 240 employees with 60 days’ written notice of their terminations, as the WARN Act requires. It seeks to recover that amount of lost wages and benefits per plaintiff, as well as employees’ accrued vacation time and other compensation owed. 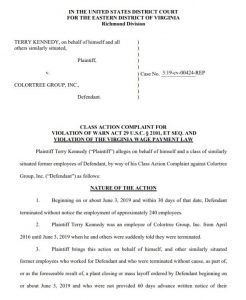 A copy of the suit. Click to view PDF.

Colortree has 21 days to respond to the suit, which was filed in the U.S. District Court for the Eastern District of Virginia. The case is assigned to senior judge Robert Payne.

Colortree has not responded to calls from BizSense for comment. A call to president and owner James “Pat” Patterson on Friday was not returned.

The suit alleges the employees were terminated without cause and “have yet to receive a final paycheck.” It said Colortree failed to pay employees their respective wages, salary, commissions, bonuses, accrued holiday pay and accrued vacation for 60 days following their terminations, and failed to make pension and 401(k) contributions or provide employees with COBRA health insurance benefits.

As a class-action suit, the number of plaintiffs could increase if more employees are added to the case. The suit states the exact number of eligible plaintiffs, as well as their names, addresses and rates of pay and benefits, are in Colortree’s books and records and “within the sole control of Defendant.”

A summons to Colortree was sent to the Midlothian office of Cogency Global, a New York-based registered agent service that is listed with the State Corporation Commission as Colortree’s agent.

Kennedy is represented locally by Spotts Fain attorneys Jennifer West and Edward Bagnell Jr., who are working the case with Jack Raisner and Rene Roupinian of New York-based employment law firm Outten & Golden. A call to West prompted an email from Roupinian, who did not respond to questions about the case.

The suit was filed just as former employees were expecting to receive their final paychecks Friday, for a two-week pay period that started May 27. Several told BizSense they did not receive direct deposits and are owed for days worked before and up to the closure last Monday.

Among them is Michael Maupin, who worked as a die cutter at Colortree since January. Like others who spoke to BizSense, Maupin said he was not notified of the closure or that he’d lost his job until another employee told him on his way to work Monday.

“Now I’m extremely worried that I’m not going to (be) paid from the days I worked before the closing,” Maupin said in an email. Reached by phone Friday, Maupin said was not aware of the class-action suit and was focused on finding new work. He said he’d heard from some companies that have been offering jobs to former Colortree employees since the closure.

“I did have a part-time job prior to my employment at Colortree and I’m trying to get more hours from them, but I still need something to pay the bills,” Maupin said.

“I’m a little mad and disappointed in the company for letting this happen and for not giving employees a heads-up about this, apparently giving some employees notification, some not so much,” he said. “I’ve pretty much been in the dark about everything.” 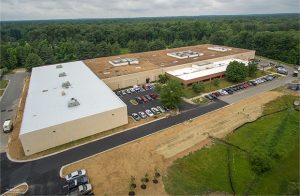 Some employees said they were given 15 minutes to clear out Monday before the building was locked following a conference call in which it was conveyed to employees listening in that the company was shutting down. The 31-year-old company had operated out of a 142,000-square-foot industrial building at 8000 Villa Park Drive.

In a letter dated the same day as the closure, Colortree sent a WARN notice to the Virginia Employment Commission and Henrico County that said it was permanently closing “some or all of its divisions” and laying off approximately 240 employees.

The notice, signed by Patterson, who purchased full ownership of the company two years ago, said Colortree “hopes to accomplish this closure with as little disruption as possible to the lives of our employees and the community.”

In the days that followed, former employees have been scrambling to connect with potential employers that reached out with job offers and held hiring events. They included locally based TemperPack, which held an event Friday morning that about 40 former Colortree workers attended.

Vinny Abbott, who handles hiring for the packaging manufacturer, said offers were being extended and interviews arranged for this week.

The events come one month after another locally based company shut its doors unexpectedly. In early May, Southside-based Live Well Financial began shutting down operations after filing a notice with the Virginia Employment Commission the same day it notified its employees.

A class-action suit similarly followed, with former employee Monica Williams claiming she and fellow workers were terminated without 60 days’ notice.