A local development firm is looking to dig its talons into a downtown parking lot for its latest townhome project.

Eagle Construction of VA wants to construct 21 townhomes on a surface parking lot at 1 E. Main St. The nearly 1-acre lot covers about half a city block bounded by East Main and Cary streets, and fronting South Foushee Street.

The firm submitted a special-use permit application with the city’s planning division Tuesday, said Nathalie Croft, Eagle’s director of land planning. The development would not include two existing structures at 11 and 13 S. Foushee St. 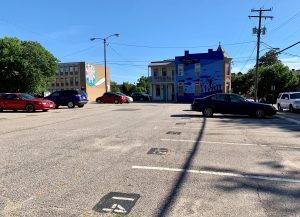 The surface lot at 1 E. Main St. is being targeted by Eagle Construction of VA for a 21-townhome development. (J. Elias O’Neal)

Preliminary plans call for a series of three- and four-story townhomes, Croft said, with an outer ring of 17 three-story units along the streets and a cluster of four, four-story townhomes with a courtyard in the interior of the development. Those units and the courtyard would be accessed via a public alleyway, and the development also will include a bike rack and mailbox area.

“We anticipate the four-story townhomes to have front terraces in the fourth floor overlooking the green courtyard space,” Croft said.

The alley would be accessible via Foushee Street, plans show. All the units will include a two-vehicle garage with alley access, and residents will have the option to include elevators in their units.

A walkway connecting the interior portion of the development to Foushee Street also is planned, preserving the visibility of an existing mural on the side of 11 S. Foushee St.

“It was important that we keep the mural visible,” Croft said. “Having the pedestrian walkway there gives us the space we need to create access for our residents and yet keep the mural intact.”

All the units will include a two-vehicle garage with alley access.

Prices for the townhomes have yet to be set. Kennedy said the units will range from 2,300 to 3,000 square feet. A project cost estimate was not disclosed.

No commercial uses are planned despite the property’s B-3 commercial zoning. As part of the SUP process, the development must be voted on by the Planning Commission and ultimately approved by the City Council – a decision Will Kennedy, Eagle’s director of land acquisition and strategy, said could be handed down later this year.

Eagle is aiming to start construction on the townhomes by the end of 2020. The plans are set to be reviewed by the city’s planning division in coming weeks.

Eagle’s Nathan Blinn designed the buildings. Croft said the firm was careful not to disrupt the existing architectural fabric of the surrounding neighborhood. 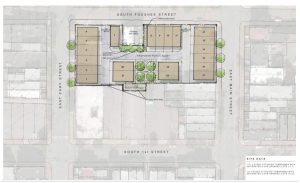 A layout of Foushee Townhomes.

“We used design inspiration from some of the adjacent properties,” Croft said. “You look across Main at the historical buildings … We tried to tie in some of our design elements to what you can see out there today.”

The project isn’t the first townhome development Eagle is planning in the city. Last fall, the firm announced plans for an urban townhome project called McRae & Lacy on a 1-acre site at 401 and 421 W. Seventh St. in Manchester.

Both developments are joint ventures between Eagle and a business entity managed by local attorney Jack Pearsall that owns both the Manchester and Foushee Street properties. Croft said site work for the Manchester development, about 27 townhomes, is slated to begin in about two months.

“Much like Manchester, we think there is a need for high-quality residential infill product in the city,” Kennedy said. “There are a lot of apartments in this area and a lot of surface parking lots. This is a great way to bring for-sale residential and permanent lifelong owners to the area.”

Kennedy said the firm is looking to forge similar development partnerships for infill sites in other neighborhoods such as Scott’s Addition, Church Hill and parts of the West End near Westhampton School.

“It’s our intention to continue working on similar sites in the city,” Kennedy said. “We want to make this a meaningful part of our business.”

I appreciate the infill development in Monroe award, the effort to create a pedestrian scale block interior, and the willingness to work with the two existing buildings. I do believe this could be bumped up in terms of density, particularly along the Main Street frontage. One wonders of the main street facing town homes could be elevated by one floor an entered from the rear, allowing for one story of retail on the street side. Main Street is on the south side of this site so additional height here would not cast shadows on the block interior court or other… Read more »

Don, Nice thought about adding density/retail. Many of the commercial spaces in this section of main and Cary were added later, often bump-outs replacing residential front porches. J.P. Morgan was actually sitting on a porch a block away on Franklin during the stock market crash of 1907, this was pretty high end residential! There are many beautifully restored residential buildings close by, and two of the nicer residences in church hill were moved from Main Street to Church Hill by HRF when the Main Street library was constructed. Eagle will likely be well rewarded for respecting the character of the… Read more »

Good idea Don but boy anything will be better than the “broken teeth” block face surface parking lots. I hope this success (and announcement down the street at 6th and Main) will lead to more infill and a greater to connection between downtown to VCU. Walking and driving through that area is eerie as it still appears like a parking wasteland in some blocks.