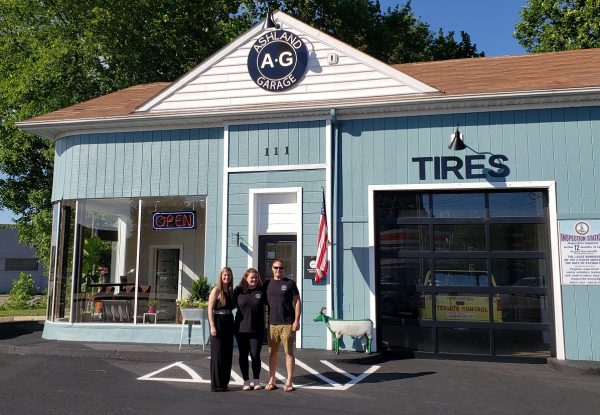 Nathan Roady has long been a fan of restoring old things to their former glory.

An old building in Ashland is the latest beneficiary of that pastime.

Roady and his family last month held the grand opening of their Ashland Garage, a new auto repair shop that’s taken over what was a rundown former Tuffy’s location at 111 Washington Highway.

Roady purchased the once-dilapidated building in February after two years of negotiations. He opened Ashland Garage in the space after a few months spent fixing it up, with more renovations still planned.

The building was built in the 1950s and stuck out as special to Roady.

“I just really like old things, the history behind (the building), and the shape of it and the rounded walls,” he said. 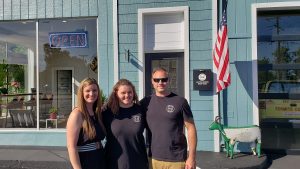 Dana Roady is co-owner of the business, while their daughter Trista is learning to run the administrative side.

Roady’s wife Dana Roady is co-owner of the new business. Their daughter, Trista, 20, also is involved, and already learning to run the business side of things, doing administrative work and acting as a service writer.

This marks Nathan and Dana’s third business venture together, as they also own HVAC companies Green Air Inc. and The Duct Shop, which opened in 2007 and 2017, respectively, and both also based in Ashland.

Nathan said that as part of a nondisclosure agreement signed when purchasing the Ashland Garage building, he could not release the price paid. He did, however, say he has poured $50,000 into renovations into the building, with another $40,000 budgeted through the end of the year.

Repairs thus far include the damaged framework of the garage, as well as sprucing up the front office and waiting area, adding high-speed WiFi so people could work while they wait, and a small table with fruits, coffee and tea. Next on the list is adding air conditioning to the repair bays and replacing the vehicle lifts. 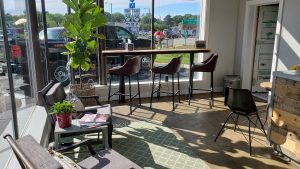 The waiting area has been completely revamped, with hi-speed wifi added so people can work while they wait.

The couple said the business idea came to them in a similar fashion as their air duct shop. They realized a lot of the expenses for their HVAC business were from buying ductwork from third parties and sending their fleet vehicles to other repair shops. They figured they could do the business themselves.

“With The Duct Shop, we were spending an enormous amount of money on ductwork for Green Air, and so we thought we could do it better,” Dana said. “And so the next expense was our (Green Air) fleet that carried a pretty large auto and truck expense, so it made sense for us to just start a shop, and that way we could service the public as well,” Dana said.

“We become our own customer,” Nathan said.

The couple also noted their drive to educate the next generation of auto mechanics. Along with hiring 20-year veteran mechanics, the two also hire those looking to get into the field through an apprenticeship-like arrangement where newer people are paired with veterans who act as mentors.

One recent hire, Cody Phelps, a junior at nearby Patrick Henry High School, has been working at the garage on weekends and for 1½ to two hours a day on school days, longer on weekends, and with plans to work full-time as summer break begins.

The apprenticeship is paid, allowing Phelps an income while learning to do what he hopes to take up as a full-time career once he graduates.

The Roadys said that the restoration of the building and founding of Ashland Garage was also a way to tap into the continued change in Ashland.

“A lot of Ashland is trying to go back to restoring and updating a lot of the buildings,” Dana said. “The town of Ashland is kind of going through a revival period and we just wanted to be a part of that. Take an eyesore and make something good of it. For us and the community.”

So great to see more redevelopment occurring in Ashland. I must say that interior is unlike any other automotive shop I have seen–very inviting!