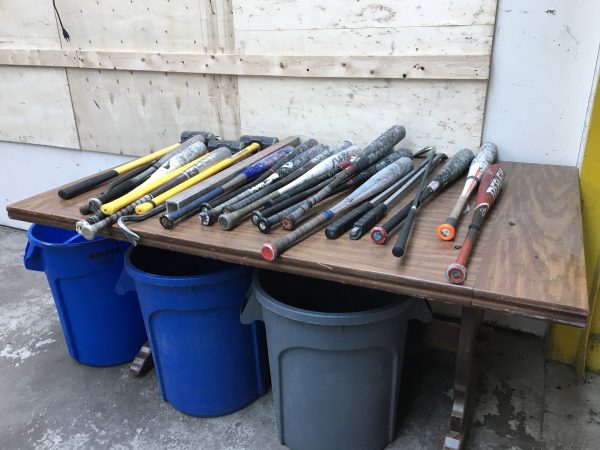 Some of the bats Rage RVA provides for customers to smash items in the room. (Rage RVA)

As former Colortree employees seek new jobs in the wake of the local printing company’s abrupt closure this month, Richmond’s resident rage room is inviting them to smash out their frustrations while inviting the community to do the same for their benefit.

Rage RVA is holding an event Friday evening to raise funds for workers who lost their jobs when Henrico-based Colortree Group closed its doors June 3 with little or no warning to its workforce, which totaled about 240 employees.

Among those affected was event organizer Sue Cline, who had worked for Colortree as a vendor for over a decade and whose wife Nicole runs Rage RVA. Cline said she and Nicole came up with the idea in light of workers who they know are without insurance and need help covering expenses. 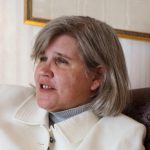 “So many people are still out of work. They didn’t get any kind of severance or help; they’re not doing GoFundMe’s, and there’s some serious needs there,” Cline said. “I know the people. These are good people who didn’t ask for this or have any idea that it was coming.

“It seemed to us that these people were in a terrible circumstance and that the room could provide a much-needed outlet,” she said. “What we were hoping for is if we let people in the greater Richmond area know, they might want to come down and have some fun and break some stuff in solidarity. If you’re an hourly employee, unfortunately the reality is any of us could be those folks.”

While former Colortree employees can take part for free, the event, titled “Paycheck OutRAGE,” aims to raise funds through “melee-style” sessions that can be purchased according to time and items smashed. A five-minute smash of 10 items is $20, 10 minutes/15 items runs $30, 15 minutes/20 items goes for $40, and a limited number of “heavy hitter” 15-minute car smashes go for $50.

The event runs from 6 to 9 p.m. Friday at Rage RVA’s space at 711 Hospital St. Additional details are available here. 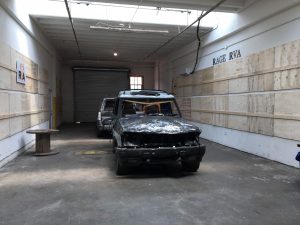 Cline said they’re aiming to raise $500 to cover some workers’ prescription drug costs and other known emergency expenses. She said workers have formed a group to prioritize needs and would allocate the funds accordingly.

“This is a great group of people. They’ve already started helping each other, because some of them have gotten jobs, and as people have been getting money back in, they’ve been lending and loaning each other money,” she said. “They’re trying to really take care of each other over there.”

Cline said she worked 11 years as a Colortree vendor, building and managing the company’s website and software integration. She said she invoiced the company just before the closure and is owed about $5,000 that she’s seeking to recover in small claims court. The company already faces a potential class-action lawsuit from former employees.

Various items are available for smashing, including printers, plastic crates and a glass circle. (Submitted)

“When you’re screwed out of your job, you’re angry and you’re frustrated and you need to deal with your emotions, and a rage room is perfect for that,” Cline said. “These are people who want to work. The circumstances were ugly, and they didn’t have any notice. I think anybody would happily hire any of them. These are great, seasoned people.”

To that end, Capital Region Workforce Partnership and the Virginia Employment Commission held a job fair last Friday specific to the Colortree closure. Mark Brickey, a rapid response coordinator with VEC, said the event was prompted by job offers that came in from dozens of employers, both local and out-of-town.

Richmond BizSense has continued to receive similar inquiries from employers since breaking the news of the closure. GRTC, Maryland-based Nova Label and Pennsylvania-based Northeastern Envelope Co. are among those who have reached out to offer jobs. 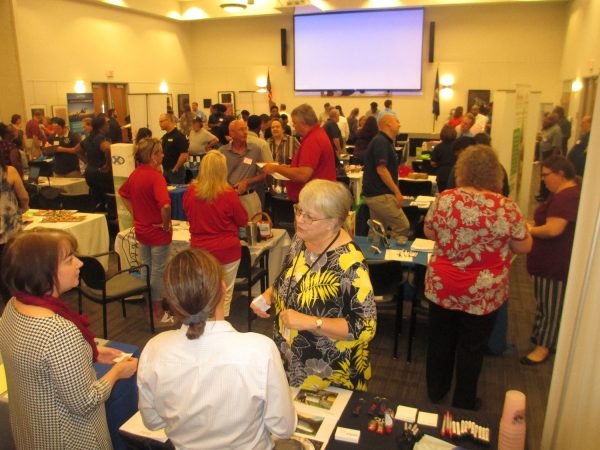 Sue, you are the best! This is a great idea, and I wish you all the best of luck. I, too, did work for Colortree many years ago, and I was really surprised by the abrupt closure.