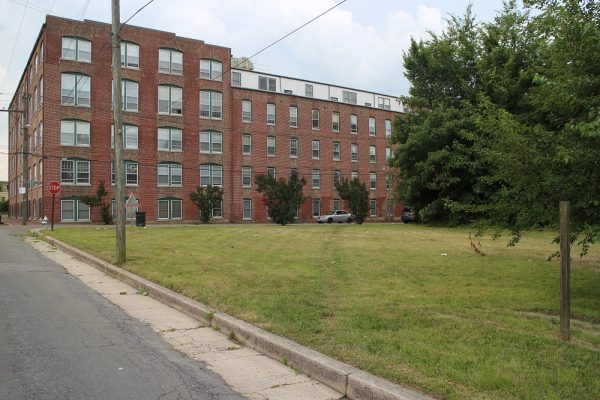 The site along Russell Street is across Venable Street from the former warehouse that now houses the Church Hill and Fairmount House apartments. (Jonathan Spiers)

A West Coast-based real estate investor who’s been on a local buying spree of late is planning his largest development to date in the Richmond market.

Eastern Edge Development, a Los Angeles-based firm led by Michael Magnes, is aiming to construct a cluster of 10 new townhomes on vacant land at the northwest corner of Venable and Russell streets in Union Hill.

Conceptual plans submitted to the city’s Commission of Architectural Review show three-story attached homes split between two rows, with five of the homes fronting Venable Street and the other row behind it positioned perpendicular to Russell Street.

The for-sale units would each total 1,750 square feet with three bedrooms and two bathrooms. Prices for the homes have yet to be set.

Magnes purchased the four lots totaling about a third of an acre in a multiparcel sale in 2013 through his Eastern Edge Development LLC. City property records show the company paid $45,000 for the land.

Magnes said he’s going forward with developing the site now in light of the recent completion of The Market @ 25th grocery store at the nearby Church Hill North Retail Center complex, as well as Better Housing Coalition’s The Goodwyn at Union Hill apartments along Venable Street two blocks west of the site.

“There have been a lot of major changes, principally the development up at the top of 25th Street, where they put in the big market and all those apartments,” Magnes said. “Also, the complete renovation of the (Citadel of Hope property) is another indicator that there was a commitment to building new projects and creating more sustainable kind of housing, because a lot of the housing stock was very old and in need of repair.

Magnes is working locally with Walter Parks Architects on the townhomes’ design, which he described as in early stages after an initial presentation to CAR last week. He said feedback from CAR would help shape the project, which would be presented to the neighborhood in a community meeting to be scheduled.

The two rows of buildings would be wood-frame construction with masonry, fiber cement siding, metal panels and fiberglass windows and doors. Magnes said each unit would have tuck-under parking to accommodate one vehicle, either in the front or rear of the buildings depending on final design.

The property is one of several that Magnes has amassed in and around Union Hill and in Northside in recent years. His first two projects in Richmond were single-family homes built on lots he purchased in 2014 in the 1200 block of North 26th Street and the 3100 block of East Marshall Street.

Eastern Edge also owns a lot in the 2300 block of Venable Street that it purchased in 2014 for $15,000. Last year, it purchased two lots on Pink Street, just off Venable Street, in foreclosure sales that totaled just over $119,000, and it also picked up five lots on North 32nd and 33rd streets in a multiparcel sale totaling $158,400, records show.

The company also owns two lots in the 3000 block of Hanes Ave. in Northside, which Magnes described as another priority area. He purchased those lots in 2014 for $30,900 combined.

A graduate of the Rhode Island School of Design, Magnes said he lived on the East Coast for years and became involved in Richmond real estate after visiting friends here and meeting local developers. While his focus is on the townhomes project now, he said plans are in the works for his company’s other holdings in the Union Hill area and in Northside.

“We are definitely looking forward to doing several other projects in that area, specifically within a two- or three-block radius of (the townhomes), and hopefully we will start in a year or two working on projects in the Northside,” he said.

Development has been hot along that stretch of Venable Street and nearby Carrington Street, a cobblestone road parallel to Venable that area property owners have voiced concerns about in light of increasing traffic. Farther west along Carrington, local builder Don Jones is planning a 52-unit apartment building on vacant land across Jessamine Street from The Goodwyn at Union Hill.