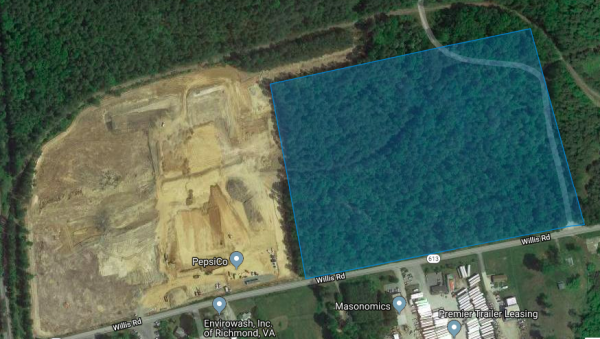 Nearly a year after selling a neighboring site to soft drink giant Pepsi, a Virginia Beach-based developer has another large industrial deal in the works in Chesterfield.

Fifty-eight acres owned by Armada Hoffler at 1410 Willis Road in the county’s Bermuda section are being eyed by Indiana-based Scannell Properties for a 405,000-square-foot distribution facility.

The property is part of the 177 acres Armada Hoffler picked up in January 2018 for $2.5 million. It built a 220,000-square-foot warehouse on part of that assemblage, selling the building and 55 acres to an entity tied to PepsiCo. for about $26 million earlier this year.

With this latest deal, it’s unclear whether Armada Hoffler would be selling the 58 acres to Scannell. It’s also not yet known who would occupy the site should Scannell’s plans move forward.

Andrea Martone, Scannell Properties spokeswoman, said in an email Tuesday the firm could not comment about the project because plans surrounding the development were too premature.

Scannell Properties is a privately owned development company that focuses on mostly build-to-suit and spec industrial and office projects. If the Chesterfield project moves forward, it would be the firm’s first Virginia project, although it maintains a regional office in Alexandria.

Plans call for the proposed Chesterfield warehouse to occupy about 35 acres of the 58-acre property, which sits between the PepsiCo. facility at 1608 Willis Road and the General Electric manufacturing plant at 1200 Willis Road.

The proposed facility will include several bays at the rear and front of the building for large trucks. It also includes parking for vehicles on the eastern and western side of the complex.

Scannell’s move into Chesterfield comes as distribution and warehousing demand blossom along the Interstate 95 corridor in the county.

Carvana has filed plans with the county last month for a vehicle inspection and processing center on a 183-acre site at 13504-15100 Woods Edge Road, along the east side of I-95 north of Ruffin Mill Road.

Called Project Utopia, the $40 million Carvana project would include multiple surface parking areas – enough to hold 9,000 vehicles – and a two-story, 200,000-square-foot center that would serve as a vehicle processing facility where inventory is inspected, reconditioned and photographed for online sales, assembly line-style.

Elsewhere in the county, Michigan-based vacuum cleaner maker Bissell Inc. acquired about 40 acres at 1200 Battery Brooke Parkway in the James River Industrial Center, a parcel that once was slated to be part of the planned 650-acre Shandong Tranlin Paper Co. factory. Bissell is planning a 611,500-square-foot industrial complex to be built in phases.