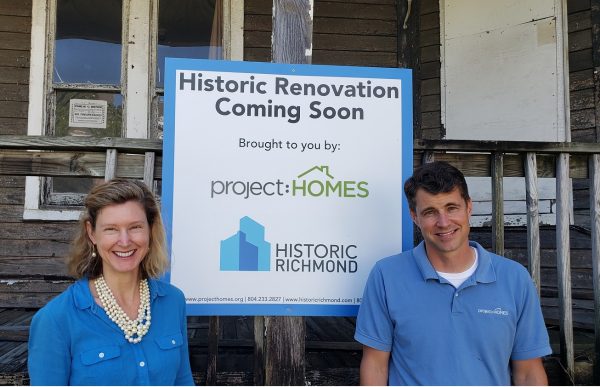 Cyane Crump (left) and Marion Cake (right). The two are working together through a partnership between Historic Richmond and project:HOMES to renovate three homes in Southern Barton Heights. (Josh Cozine)

Historic Richmond and Project:Homes are beginning renovations on three century-old houses in Southern Barton Heights that have been tax-delinquent and without residents for over a decade.

The houses each represent unique styles of historic architecture that Historic Richmond is trying to preserve through use of a revolving fund that the organization keeps specifically for rehabilitating historic properties. They also are located along the Monteiro Street corridor that serves as a gateway into the neighborhood from the First Street bridge.

Cyane Crump, Historic Richmond’s executive director, said the houses rate as highly historical due to their architecture and location in Barton Heights, which is listed on the National Register of Historic Places.

Located at 1611 Monteiro St., and at 1606 and 1708 Sewell St., the homes are each between 1,600 and 2,400 square feet and are being renovated to sell to three first-time homebuyer families. To facilitate first-time buyers, the homes will be sold to families that earn below 80 percent of the area median income according to HUD income limits – currently $69,000 for a four-person family in Richmond.

The collaboration is the first of its kind for the two groups and the City of Richmond, which provided administrative support. Historic Richmond and Project:Homes were on the verge of collaborating on a previous home rehab that brought the groups together for the Barton Heights project.

“It all started with a house down the street as a potential revitalization project,” Crump said. “Then we looked at the neighborhood more and thought we should do more than one house.”

Historic Richmond operates a revolving fund that it taps every few years, depending on the size and scale of previous projects, to renovate properties it identifies as historic. Its mission statement, according to the group’s website, is to “shape the future of Richmond by preserving our distinctive historic character, sparking revitalization and championing our important architectural legacy.”

Project:Homes is a Richmond-based nonprofit that works to make housing and renovations affordable for low-income individuals and families. Marion Cake, the group’s director of neighborhood revitalization, said the permits to start the Barton Heights renovations were received three weeks ago and he hopes to start work on the homes any day.

Once fully renovated, the homes will be put up for sale. Above, a visual comparison of the house at 1606 Sewell St.

Once work has started, Cake estimates the homes will be fully renovated in nine months, though he said the timeline could be longer. He said the project is unusual for Project:Homes in the extra care needed to preserve as much of the architecture as possible, as well as working on all three homes at the same time. Other projects the group is involved with in the same neighborhood are new constructions, and he said the group’s other renovations in the Richmond area are not forced to adhere to such a level of historic preservation.

“This kind of thing doesn’t happen,” Cake said about renovating such old homes while attempting to preserve the architecture.

“The cost to renovate would be more than (the houses) are worth,” he said, adding that such a project is not one that a for-profit renovation company normally would engage in.

Cake added that while the renovations would be eligible for the Federal Historic Rehabilitation Tax Credit Program, since the plan is to sell the homes rather than retain them and rent them out, it wouldn’t make sense for the group to pursue the credits. The homes will qualify, however, for the Richmond Rehabilitation Tax Abatement Program, which will allow the owners to pay property taxes on the houses’ pre-renovation values for the first seven years of their mortgages.

Crump would not disclose the renovations budget. Along with Historic Richmond’s revolving fund for rehabilitating historic properties, funds also have been provided by the Virginia Sargeant Reynolds Foundation. Project:Homes is the general contractor on the project.