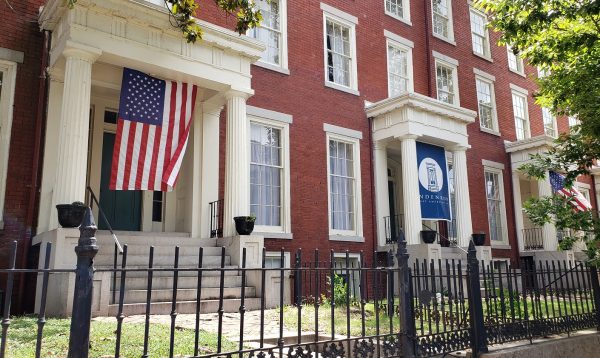 Parterre will open on the first floor of the Linden Row Inn on East Franklin Street. (Photos by Josh Cozine)

A new restaurant, named in honor of author and onetime Richmond resident Edgar Allan Poe, is in the works in an inn downtown.

Parterre, as the restaurant will be called, will take up the vacant street-level space at Linden Row Inn at 100 E. Franklin St. The 1,900-square-foot space was left vacant by Urban Farmhouse Market & Café, which closed in April.

Parterre will be owned and operated by Trolley House Refreshments, a vending machine service company, as well as catering company Groovin’ Gourmets, which Trolley House has owned since 2016. 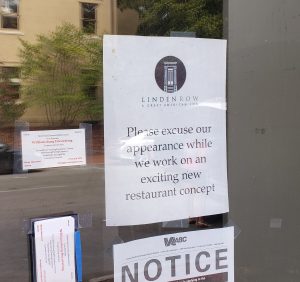 A sign on one of the doors of the Linden Row Inn announces a new construction which will be Parterre.

Parterre is a term not normally heard outside of gardening, where it refers to a formal garden with interspersed plant beds and connected walking paths running through it.

The area Linden Row Inn now occupies was across the street from a long-since-demolished home of Edgar Allan Poe, and the Linden grounds were once a garden that Poe would frequent in his youth. He once referenced the area in one of his two poems that share the name “To Helen,” referring to it as an “enchanted parterre.”

When it came time to find a name, Chase Seymour, director of culinary services at Groovin’ Gourmets, mentioned to his wife they wanted a historical, Edgar Allan Poe reference. She came up with Parterre.

“We’ve been doing business with Trolley House for our vending machines and with Groovin’ Gourmets as a caterer for special events for over a decade now,” he said. “We had a restaurant space and we talked with them and it worked out.” 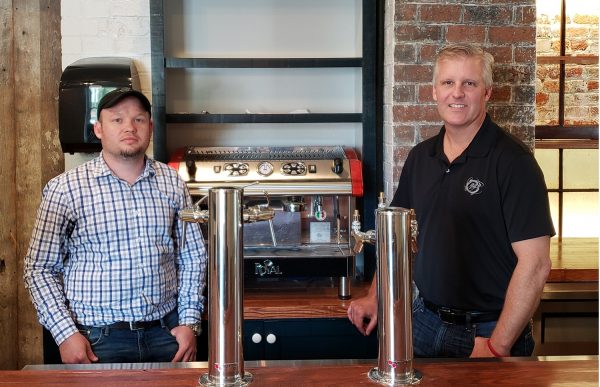 Chase Seymour (left) and Scott Halloran behind the bar at Parterre.

Williamsburg Decorating is performing renovations that are nearly complete and the restaurant is set to open in September — waiting mostly on health department inspections and ABC licenses. 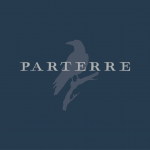 Along with using a raven for the Parterre logo – a nod to arguably Poe’s most famous poem, “The Raven” – the restaurant will serve a gin-based cocktail named “To Helen.” But Parterre otherwise will not be over the top on Poe references.

Seymour said the menu is still in the concept phase, but Parterre is planning to serve rotating seasonal Southern-based selections such as smoked wings with sweet potato pickles, Chesapeake crab cakes with pickled corn and okra relish, and fried chicken thighs served over grits. The restaurant also will feature a craft cocktail bar along with grab-and-go items and weekend brunches.

Parterre will seat 50 diners inside and 24 on the patio.

I am so excited to see a restaurant coming to Linden Row.