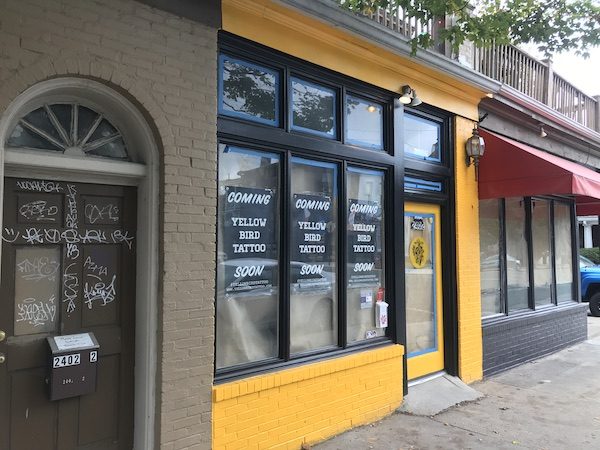 Yellow Bird Tattoo will reopen near the intersection of West Main Street and North Stafford Avenue. (Photos by Mike Platania)

A local tattoo parlor is flying west to the Fan.

The Fan space will be Yellow Bird’s third home since owner and tattooer Joseph Fessman launched the business in 2016. He first opened the shop under the name Old Soul Tattoo in Scott’s Addition, where he’d been subletting about 250 square feet from Black Hand Coffee Co. 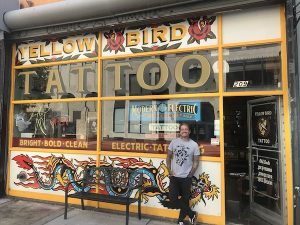 When Black Hand moved its roasting operation to Brookland Park Boulevard, so went Old Soul’s sublease. Fessman then moved the shop to the Third Street location, where it’s been ever since.

A New Jersey native, Fessman got his start in the industry working the counters and as a piercer at various parlors. He eventually wound up at a shop owned by the late tattoo artist and motorcyclist Richie “Pan” Panarra, who gave Fessman inspiration for the shop’s original name.

“Rich used to call me and everyone we knew ‘old souls,’ and I thought that was especially special, so I went with it,” Fessman said. “After Rich passed away, I was off in the wind, leaderless, and I resolved to do my own thing.”

He changed the name to Yellow Bird after learning of another tattoo shop in Pennsylvania that had the ‘old soul’ name.

“I know those folks and respect them … The industry’s really well-connected, so I made it my personal goal to change it,” he said.

Fessman said the new space in the Fan is about the same size as its current space – 1,200 square feet.

“We see the move as an opportunity for us to grow. There’s more foot traffic, we’re on a main street instead of a side street, and the parking over in this area (downtown) is brutal,” Fessman said.

Work is underway on the Main Street space now and Yellow Bird is looking to reopen in early September. The space is adjacent to Uptown Market and Deli, and was formerly a laundromat.

The shop will have four tattoo artists, including Fessman, as well as a piercer.

As Yellow Bird prepares to depart downtown, another tattoo parlor is set to open soon around the corner from it. SinnerG Tattoos, which will incorporate a haunted house element, is slated to open at 315 E. Broad St. this fall.

Speaking of the Uptown Market and Deli. The windows and doors (as in your photo) have been papered for several weeks. I am assuming it has closed.??