A year-old Richmond-based law firm is on the move.

Ford Richardson, which was launched in May 2018 by former McCandlish Holton attorneys Scott Ford and Brian Richardson, last month expanded with an office in Hampton Roads.

Manning the new office is Audrey Marcello, Mark Kilduff and Matthew Moynihan, all of whom had been with the law firm TaylorWalker in Norfolk and Virginia Beach.

The Hampton Roads office is a fourth outpost for Ford Richardson, which came out of the gate last year with locations in Richmond, Roanoke and Northern Virginia. Its Richmond headquarters is on the 18th floor in Riverfront Plaza West.

The firm now has 13 attorneys and 35 total employees focusing on representing companies in workers’ compensation cases, and related commercial and insurance-driven defense litigation. 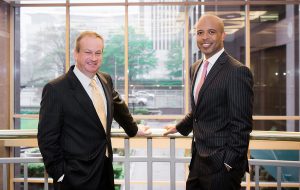 Richardson said the move east was driven by both the continued lateral movement among lawyers around Virginia and a connection he had with Marcello, as they attended law school together at Washington & Lee University.

“It seems like there’s been a lot of movement in the legal community recently and we had always had sites on the Hampton Roads area,” Richardson said.

“Audrey decided to make a move. The thought always was it would be nice to work with each other. And I think our platform was one that was appealing to her, with the fact that we have these regional offices allowing her to expand her own book of business.”

It turned out Kilduff and Moynihan – graduates of UR and W&L law school, respectively – were interested in making a move as well.

Marcello and Kilduff join as partners. Moynihan is an associate.

“It makes a good core group to seed a new office there,” Ford said.

The trio is set up in a temporary office in 500 E. Main St. in downtown Norfolk and they’re looking for more permanent digs in either Virginia Beach or Norfolk.

Nearly 18 months in, Ford said they’re pleased with the firm’s growth. That includes picking up work on the massive Toys “R” Us bankruptcy case, which was filed in Richmond and brought with it plenty of work for local attorneys.

“I can’t believe it’s been over a year,” Ford said. “We’ve had a nice trajectory of growth and have been able to attract some excellent talent.”

Richardson and Ford said the next likely area for growth for the firm is Northern Virginia, where they’ll look to add to their ranks in Fairfax.