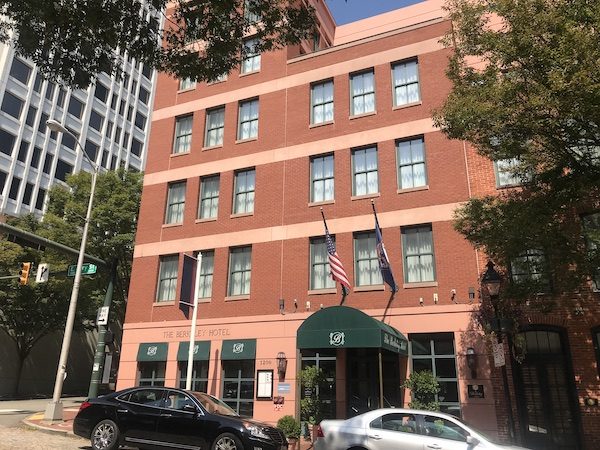 The 55-room hotel is under contract to be sold for $7 million. (Photos by Mike Platania)

A Shockoe Slip hotel is set to become the latest asset of a Richmond-based real estate investment trust.

Apple Hospitality REIT is under contract to purchase The Berkeley Hotel at 1200 E. Cary St. for $7 million. The publicly traded REIT, which is based around the corner at 814 E. Main St., owns 234 hotels in 34 states.

Apple Hospitality spokeswoman Kelly Clarke said in an email that if all conditions are met, the company expects to close on the property by the end of 2019.

Clarke said the company plans to renovate The Berkeley and keep it independent from its other brands. The Berkeley would be a bit of an outlier in Apple Hospitality’s portfolio, which consists primarily of national franchises such as Marriott, Hilton and Hyatt hotels. 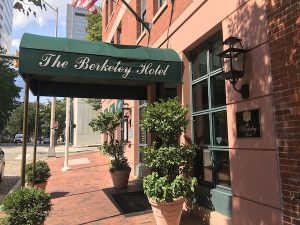 The Berkeley bills itself as Richmond’s original boutique hotel.

The Berkeley opened as an independent hotel in 1988 under the ownership of Alan Voorhees, who died in the hotel in 2005, according to news reports from the time. The property was sold by Voorhees’s family two years later in 2007 for $5.1 million, according to city records.

The 39,000-square-foot hotel has 55 rooms, as well as the Cobblestone at The Berkeley restaurant, and meeting and event spaces. Rooms range from $111 to $239 per night, per its website.

The Berkeley will be the second hotel under Apple Hospitality ownership on East Cary, joining the Courtyard Richmond Downtown at 1320 E. Cary St.

Apple Hospitality’s other local holdings include the SpringHill Suites Richmond Northwest in Henrico, the Richmond Marriott at 500 E. Broad St. and the Residence Inn Richmond Downtown at 14 S. 14th St. On its Q2 2019 quarterly report, Apple Hospitality reported $341 million in revenue and a profit of $51.9 million.

Surprised they are renovating it. Their Richmond Marriott property is really tired, and to me – looks”for Sale.” Hopefully, they will treat this property with some more love.