As it closes out one of its larger communities, a local development firm is moving forward with its next project in Chesterfield County: a mixed-use project on 200-plus acres that would add nearly 800 homes south of Brandermill.

Realty Ventures Group, whose two dozen or so developments have included the nearly-built-out Tarrington on the James, has submitted plans for a project called Swift Creek Station, on nearly 230 acres just south of Swift Creek Commons and the Village at Swift Creek Shopping Center.

Plans call for a maximum of 799 homes, some age-restricted, including single-family homes, apartments, duplexes, quads, and “two-over-two” townhomes and condos. Commercial uses that would be integrated with the homes include a pharmacy, restaurants, a coffee or donut shop, and a gas station.

At least 75 acres would be preserved as open space, and amenities would include a 2,500-square-foot clubhouse, a dog park, shared-use paths, a connection to county bike paths, and a sidewalk along the planned Bailey Bridge Connector road that would bisect the property, connecting Bailey Bridge Road and Brad McNeer Parkway.

RVG is seeking to rezone the property, which previously was zoned for a residential development called Holly View. The request is on the agenda for the Chesterfield County Planning Commission’s meeting this Tuesday.

Herbert Fitzgerald, who leads RVG with fellow principal Richard Nuckols, said Swift Creek Station was drawn up in response to the connector road plan and changes to the county’s long-term plans since the current zoning was approved. 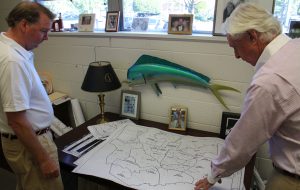 “Ten years ago, it was for a 500-unit residential project, and since that time the county has updated its master plan as well as come up with a connector road that bisects our property, so our rezoning really is just reactive to changes in the county,” Fitzgerald said. “I think we’ve got a really neat mixed-use project with different uses in there to meet the current market.”

The project would enjoy proximity to the adjacent shopping center and the commercial corridor along Commonwealth Centre Parkway, where development interest has picked up in recent months. Local developer Guy Blundon’s CMB Development is planning 226 apartments on 11 acres along the corridor, which fills the southwest quadrant of the Hull Street Road and Route 288 interchange.

“That’s what attracted us to the site long ago,” Fitzgerald said, “the access to the commercial area that’s there, in close proximity for our residents.”

Totaling 228 acres, the site consists of five parcels that RVG purchased in 2007 through an entity called Swift Creek Holdings LLC. County property records show the LLC paid a total of $4.68 million for the land. 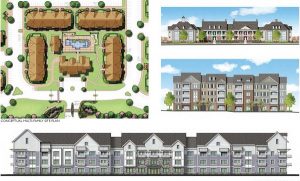 Renderings of the multifamily buildings.

Plans submitted to the county call for a maximum housing density of 150 single-family lots, 150 low-rise multifamily units, 350 midrise units and 150 age-restricted units. The two-over-two townhomes and condos, meaning two-level units stacked on top of each other, would be in buildings restricted to four stories in height. Other building elevations would be lower.

RVG worked with HG Design Studio on the project’s master plan, and attorney William Shewmake with Woods Rogers is representing the LLC in the rezoning process.

Shewmake said the plan is an improvement over what’s allowable under the current zoning.

“It’s an exciting project,” Shewmake said. “The current zoning, probably about 500 homes and townhomes, would be just a basic standard subdivision. Now, with the Bailey Bridge Connector coming through, you’re able to have a true master-planned mixed-use community with some commercial nodes, hopefully a craft brewery.”

Sample designs for the single-family homes.

Shewmake said price points and rents for the homes would be comparable to those already seen in the area.

“It’s going to be very high-end, very comparable to what’s out there already,” he said. “These are intended to be very upscale apartments, and the owner-occupied will be starting at $350,000.”

If approved, the project would take about 10 years to build out, Shewmake said, and would be coordinated with the Bailey Bridge Connector project, which is scheduled to begin in 2022. He said an overall development cost has not been disclosed.

Swift Creek Station would be the latest development for RVG, which has developed about 25 communities in the area including The Grove in Midlothian, Westhampton Place in Richmond, Tilman’s Farm in Powhatan and Rivergate in Goochland.

Tarrington on the James, at 740 acres and 710 homes, is RVG’s biggest to date. The residential community along Robious Road beside James River High School entered its final construction phase last year. 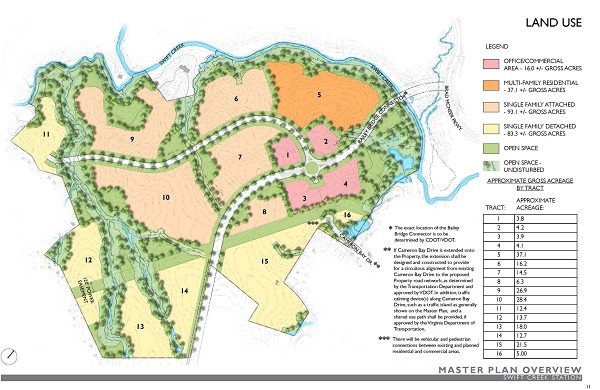 A site plan of land uses for Swift Creek Station.

Destruction of trees, farmland, and wildlife is irreversible….all for the almighty dollar signs of the developer whom always gets their ways despite citizen gripes and grumbles. Seems like the counties work for the developers. What a sad time we live in.

You’re right. The County should listen to all those people who bought new homes but don’t want anyone else to buy a home. All those people who complain about ruined views and green space but who also had no problem buying a new home a ruining someone else’s view and destroying green space. There is only so much credence you can put in people who say “this area was so nice x years ago when we built our house. More new homes will ruin it” or my favorite “My realtor told me nothing would ever get built there”…

There are 200,000 more people in Chesterfield County now than in 1980 when Brandermill was hitting its stride. Where are they supposed to live?

If I’m not mistaken…. as long as people are populating, builders will be building.

I believe the landowner sold the land, which was well within their rights. Any group that wanted to protect the trees, farmland and wildlife was free to purchase the land and develop (or not develop) that land as they desired, as long as the zoning allowed for it.

This will be very unfortunate if it goes through. The roads are already way over capacity in this area and this will only add to it.

It’s almost as if the BoS doesn’t care about its current citizens . I avoid that stretch of 360 like the plague as it is today, I can’t even fathom what it would look like when this inevitably passes

BoS: We need more industry in Chesterfield! This is a bedroom community! We have an uneven residential tax base! Schools are chronically overcrowded!
Also BoS: Yeah sure, 800 more homes, no problem, go for it

While true that Chesterfield needs more office/industry to even the tax base that type of use needs to be properly planned for and this would not be the place for it.