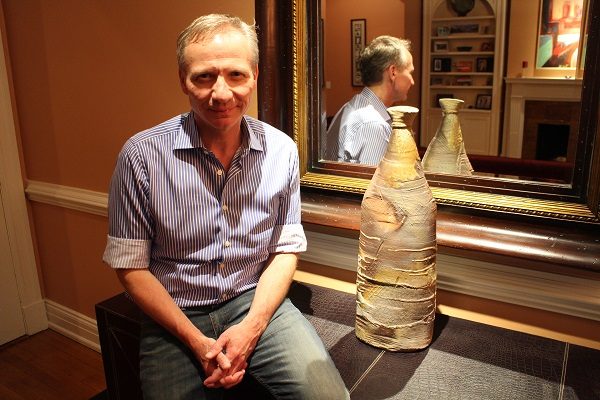 Brian Pitney with one of his creations. (Photos by Jonathan Spiers)

When Brian Pitney started practicing law, he knew he’d need to get his hands a little dirty – with clay.

Soon after he got his law degree from the University of Richmond, Pitney, now an attorney and shareholder at Sands Anderson, said he felt compelled to pick back up what he had dabbled with and left in high school art class: ceramics.

“I really got into understanding what the law was about, and it’s a lot of projects that might take months or years to complete. I just felt this need for some therapy, to sit down and get something done in one sitting,” Pitney said. 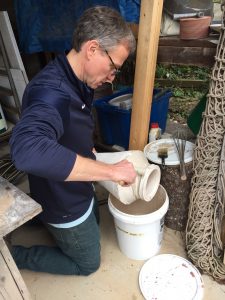 At work on a vase. (Courtesy Brian Pitney)

“Pottery not only helped me with that, but also allowed me to be around some other artists, which I found inspirational, and let me get my hands dirty,” he said. “When you’re working behind a desk a lot or you’re going to trial, something like that and getting out of that whole mindset, I think, is really important. It’s good to help put things in perspective.”

For 25 years, Pitney has been a regular at the Virginia Museum of Fine Arts Studio School, where he takes classes that allow him to pursue his love of ceramics, both “wheel throwing” – the pottery style that uses a spinning wheel – and “hand building.” Pitney’s preference is a combo called “thrown and altered,” in which he shapes an object using a wheel, then alters part of it by hand.

“You can smash it or hit it when it’s leather-hard, and it looks somewhat intentional, but sometimes it’s not. To me, the imperfection is beautiful, which mirrors more the real world, as far as I see it,” he said. 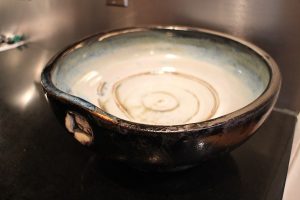 An example of Pitney’s “thrown and altered” work, with an indention visible along the bowl’s rim.

Helps on the job

Pitney said he applies that perspective to his day job, where his practice focuses on real estate law and business and corporate transactions. Pitney described his role as helping guide entrepreneurs through legal issues that may stand in the way of starting a business.

Referring to his role as legal counsel, Pitney said, “You can have the perfect answer and have people do the research and ‘This is correct,’ but generally they’re not coming to you because there’s a perfect answer. It’s generally in a gray area, so what you’re trying to do is come up with a creative solution that works.”

That creative approach in his day-to-day in turn goes back into his art – what Pitney and fellow potters call “throwing clay.” 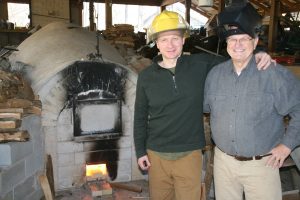 Firing up an Anagama kiln with his father, Roger Pitney. (Courtesy Brian Pitney)

“I will bring some of the things that I pull from the law firm and my law job into my pottery, the way that I might make it or think about it,” he said. “I really don’t divide it up one way or the other, but I do find that the creative part of the process is more valuable to the profession than the profession to my art.”

His hobby has informed other parts of his life, as well.

At the Studio School, where he crafts such objects as plates, bowls and vases, Pitney’s friendship with VMFA instructor, resident potter and musician Steven Glass led Pitney to take up the harmonica. He plays with Glass in a group that often performs at Meadow Park in the Fan and West Avenue, where Pitney resides with his family. 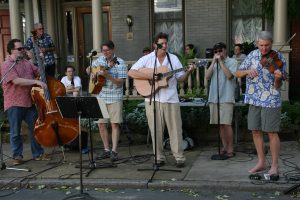 Having helped form the foundation’s nonprofit corporation and 501(c)3 designation in the early 2000s, Pitney serves on the foundation’s board and gets to show some of his work in its exhibits. Attracting artists from around the world, the foundation is involved with the National Council for the Education of the Ceramic Arts, which is bringing its annual convention to Richmond next year.

‘I get to show my stuff’ 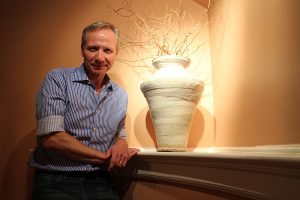 Pitney’s vases and other objects are displayed throughout his home.

“My hobby turned into something that I had no idea it would turn into,” Pitney said of the foundation. “It’s a real passion for me, and I’ve gotten to learn so much. I get to go along with the ride. Because I’m the lawyer and everything, they invite me, so I get to be in the exhibits. I’m no professional artist, but I get to show my stuff.”

Raised in Nebraska, Pitney’s path to Richmond came by way of UNC-Chapel Hill, where he got a bachelor’s degree in business administration. Rather than pursue an MBA, which he considered repetitive, he decided to apply what he’d learned to a law career, enrolling in UR’s T.C. Williams School of Law.

“I didn’t know exactly what I wanted to do, and it seemed like something that I was interested in. It seemed like a challenge,” he said. “You always read about businesspeople and lawyers and they work together all the time, for various reasons. I’m basically a business guy who happens to have a law degree.” 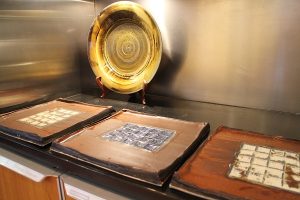 Some of Pitney’s work.

While his interest in business has driven his legal work, Pitney said his interests outside the office – music and throwing clay – are what help sustain and balance it with his life.

“I get to be partners with a lot of entrepreneurs and business people; I’m there in their decision-making process and a lot of the challenges that they have, so I really do value that I have a hobby and an artistic outlet to bring some creativity and not just look at it analytically and logically,” he said.