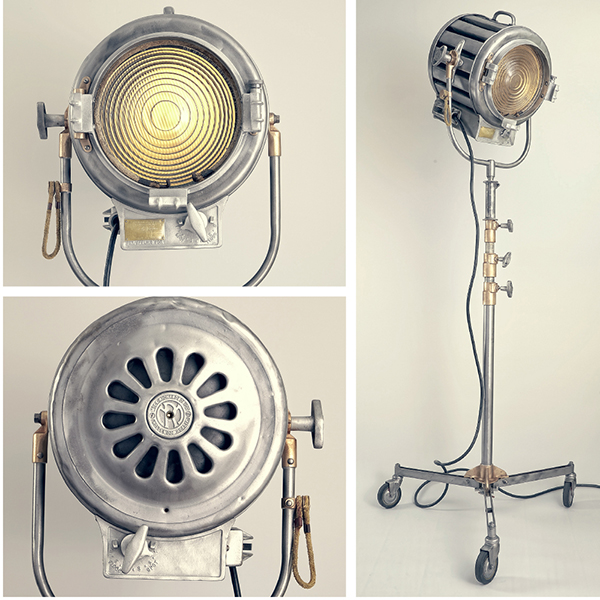 Scarpati renovates old lights from as far back as the 1940’s to have modern mechanics. (Photos courtesy John Scarpati)

In the 1970s and ’80s, John Scarpati built a career as a music photographer, aiming his lenses at some of the biggest glam and punk bands of the time, such as Poison, Warrant and L.A. Guns.

Now, in retirement, Scarpati is going strong with a side gig that’s keeping him surrounded by spotlights of a different sort.

His Old Hollywood Light Co., which he runs out of his home in Short Pump, restores and resells vintage movie lights for up to $3,200 a pop.

A New Jersey native, Scarpati said he first began refurbishing retro lights about seven years ago while living in Nashville. He’d been hired for a shoot to replicate the style of the late George Hurrell, a photographer who shot glamour photos of actors in the 1930s and 1940s.

“You’ve got all these things that are supposed to emulate the hot light he used, but it’s not quite the same,” Scarpati said. “I said, ‘I’ve got some of these old tungsten theater lights. Why don’t I retrofit them with strobes and see if I can get that look better?’” 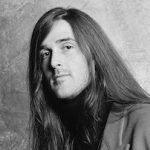 He swapped strobe lights into some old housings and it worked as planned. So he kept at it, gathering other old lights, mostly because he had a blast rebuilding them, even though he didn’t need all of them for his own use.

As he built his inventory, he turned to his old friends in the music and entertainment industry from his days in Los Angeles to see about finding customers.

“I had a bunch of friends that are directors and producers. They were like, ‘Man, I wish we could use them on set for a video.’ I said I could retrofit them again for video and use lower power sockets,” Scarpati said.

“They were props for around the studio because they looked cool, and I started renting them to directors for using on shoots.” 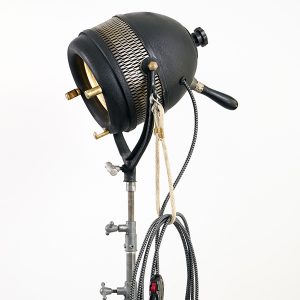 He eventually set up an Etsy shop to sell the lights online, before moving the then-unnamed business to Richmond in early 2017 after getting married. They sell from $900 to $3,200, with pricing based on age and rarity of the light.

In need of a name

It wasn’t until this summer that he gave the venture a proper name with the help of veteran local adman Cabell Harris of Work Labs.

“Cabell was like, ‘Your company needs a name.’ I was like, ‘I guess it does,’” he said. “I didn’t give the company a name because I thought it wasn’t a company,” Scarpati said, laughing.

“I asked some of my old Hollywood friends for ideas and gave it all to Cabell and he came up with Old Hollywood. He motivated me to take it to the next level, to start branding it and make it its own thing.”

Scarpati worked with Work Labs to come up with a logo and name for the business.

Scarpati said he builds his inventory of old fixtures through those same old friends out west who catch wind of their availability.

Scarpati went west as a middle schooler when his family moved to St. Ynez, California. After graduating college in San Diego and realizing he wasn’t interested in a career in finance, he went back to school at the ArtCenter College of Design in Pasadena and set up his own photo studio.

His big break came at a studio one day in Sherman Oaks when he hit it off with a guy who was in there recording. The two got along, and the unnamed guy told Scarpati that he was heading to Europe the next day, but that he wanted to stop by Scarpati’s studio the next day for a photo to go on the inside sleeve of his CD.

“So I’m driving home (from the recording studio) and ‘When The Lights Go Down’ (by Journey) comes on and I thought, ‘Holy shit, that’s Steve Perry I was just talking to,’” Scarpati said.

His brief, unplanned shoot with the Journey frontman ended up being the cover art for Perry’s solo album “Street Talk,” which went platinum.

Scarpati dropped out of school and threw himself into the music photography world. He built a relationship with Enigma Records, a now-defunct but budding label at the time.

“Back in the 1980s, I was doing the album covers for L.A. Guns, Warrant and Poison — all the glam shit. I apologize but I was responsible for that,” he said, laughing. Later on he was embraced by punk and alternative bands like Jane’s Addiction, Social Distortion and Redd Kross.

“I think the thing that actually got me to where I needed to be more than anything was having a handful of bands that believed in me, and then them making me their only, go-to photographer,” Scarpati said of his rise to prominence in the ’80s.

“It was like I became a member of the band. I had a number of bands that, as they moved up, they took me with them.”

Now, 40-some years later, Scarpati said he’s retired from the photography business, or at least he’s trying to be. Ahead of the move to Richmond in late 2016, he offloaded his studio in Nashville and sold or gave away most of his photography equipment to his assistants.

“I kept enough photo gear that if anyone ever really inspired me to start again, I’d be ready. Not that I plan to!” he said.

He said he loves the tactile aspect of Old Hollywood Light Co. and the challenge of finding the right parts to refurbish and renovate the old light fixtures. Even finding the lights can be the tricky part.

“You never know when you’re going to find them and when you’re not, so I’m trying to stockpile when I can,” Scarpati said. 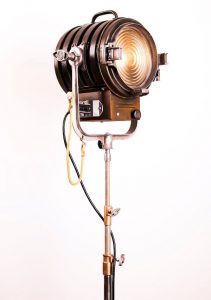 Scarpati said he finds the lights with the help of his contacts in the entertainment business he made in the 1970’s and 80’s.

Set up in Short Pump, Scarpati turned his backyard shed into a workshop and does as much of the restoration there as he can. He uses American Stripping Co. of Richmond to sandblast the old paint and O.K. Foundry Co. to make the occasional metal mold for a part that doesn’t exist anymore.

“Did I think about getting a kiln to start melting and pouring metals myself in the backyard? Sure I did. But a man needs to know his limitations,” he said.

He said lots of people order custom-built lights, for which he researches the history of the light, shares photos of the restoration process and makes it all part of the experience.

While it has become a business, Scarpati said he’s more concerned about working with people he likes and enjoying the process rather than growing the bottom line.

John is the real deal! I worked with him for years on advertising and personal shoot. He’s an artist, period. Check out his lights! They are an amazing wrap around you hug of a by-gone era.