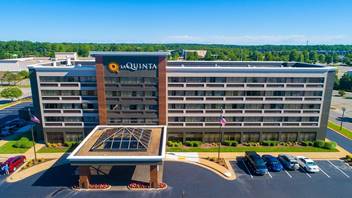 One of the first hotels to be developed in the area around Chesterfield Towne Center has been sold to an out-of-town investor.

The transaction closed Sept. 23, according to Chesterfield County real estate records. The nearly 3-acre site was most recently assessed by the county for $5 million.

Merchant said he and Patel listed the 112-room hotel for sale without a price tag in June and it fetched about six bids that were considered. The property went under contract with Kishna in mid-July, Merchant said.

Developed by Danville-based The Daniel Group Inc. in 1989, the hotel sits next door to the Hooters restaurant near the mall’s entrance across from Old Buckingham Road, which leads to the Barnes & Noble concourse.

Daniel Group, which has owned and operated the hotel since its construction, renovated the five-story building this year. The property also includes a nearly 1,300-square-foot meeting room, business and fitness center, and large-truck parking.

Officials with Kishna and Daniel Group could not be reached for comment Thursday afternoon.

Merchant said Kishna has no immediate plans for the site, describing the purchase as a turnkey operation that needed very little additional investment. He said the group will keep the hotel’s brand in place.

“It’s a long-term investment property,” Merchant said. “They were very pleased with the property and growth in the surrounding area.”

New investment has been a constant of late in and around Chesterfield Towne Center.

Crunch Fitness opened its latest gym at the mall this summer, and Island Shrimp Co. is now open nearby. HOUSEpitality Family, which owns the restaurant along with the Boathouse and Casa Del Barco, is preparing to open a new Casa Del Barco location next door in coming weeks.