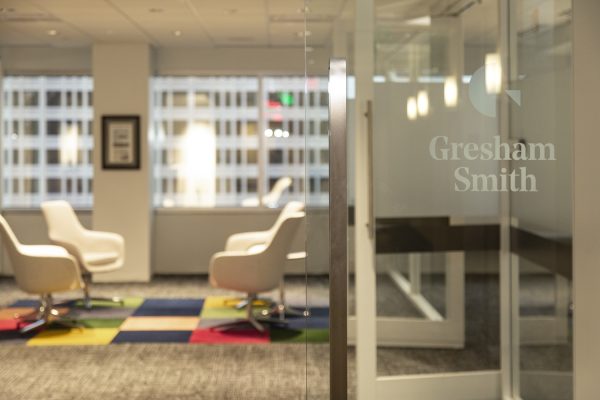 A national architecture firm has traded its longtime digs along East Main Street for a room with a view a dozen stories above it.

Gresham Smith, a five decades-old firm based in Nashville, has relocated its Richmond office from 10 S. Sixth St., where it had been since 2003, to the 12th floor of the downtown SunTrust Center building five blocks away.

The 8,000-square-foot office is about 1,000 square feet smaller than its previous space, reflecting a change in its office layouts across the company, said David King, a regional vice president who leads the Richmond office.

“We moved our headquarters two years ago into a new building, and that really set the standard for how we were going to change the way we do our work and the workplace environment,” he said. “Now, as we roll out these new offices as our leases expire, we’re bringing everything up to the same standard.” 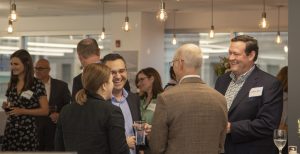 The office held an open office earlier this month.

“We’ve gone to a totally open-office environment,” King said. “It just allows for a much more collaborative environment, which is conducive to how we work.”

He said the company signed a multiyear lease for the space in SunTrust’s Suite 1200. It worked with Nick Ellis with Savills USA’s Raleigh-Durham office to find the space and negotiate the lease.

King said they considered several sites around town but selected SunTrust for its amenities and views of downtown. He said the building’s cafeteria and YMCA branch are pluses for employees, who moved into the space in late July and held an open house this month.

About 20 people are based in the Richmond office, which focuses on aviation, health care, and corporate and urban design. The company’s local clients include Bon Secours St. Francis Medical Center, HCA Henrico Doctors’ Hospital and Richmond International Airport, where its designs have included the 60,000-square-foot Concourse A expansion. 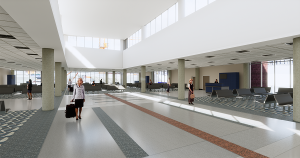 A rendering of the Gresham Smith-designed Concourse A expansion at RIC.

Founded in 1967, Gresham Smith entered the Richmond market in 1995 and is approaching its 25th year in the region. Its two dozen other U.S. offices stretch from Richmond to Florida and as far west as Dallas and Chicago. It also has international offices in Shanghai, China, and in Dubai in the United Arab Emirates.

The company is the latest design firm to draw up new office space in Richmond.