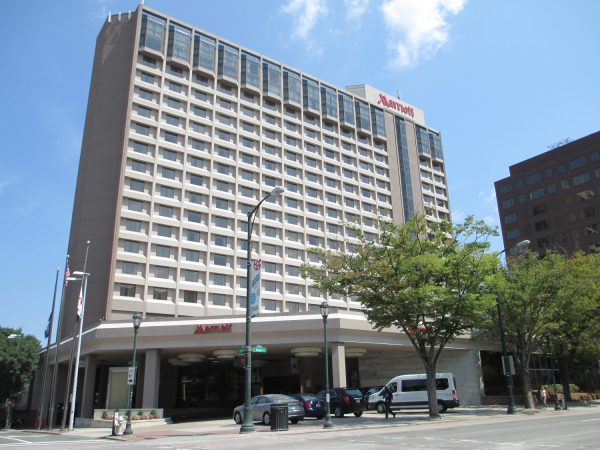 Ten years after it got a $14 million face-lift, a downtown Richmond hotel is set to get another multimillion-dollar makeover.

The Richmond Marriott at 500 E. Broad St. announced it is beginning renovations of its 410 guest rooms, to be followed by updates to its lobby, dining facilities and fitness center.

Room renovations are getting underway this month, with lobby and restaurant work to begin in mid-December. The fitness center will be renovated in the first quarter of 2020, and all of the work is set to be finished by June. 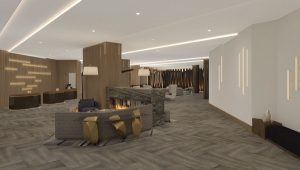 A rendering of the new lobby design. (Richmond Marriott Downtown)

The hotel will remain operational throughout, though the work will require the closure of its T-Miller’s Sports Bar & Grill, Liberty Bar and Starbucks café. The renovations will replace T-Miller’s with a new restaurant to be announced at a later date, and the Starbucks will be expanded with a larger footprint and a patio.

A temporary restaurant will be set up in part of the hotel’s meeting spaces during the renovations, and a Starbucks kiosk will be placed near the hotel’s parking entrance. An alternate fitness center also will be provided through the project.

The renovations come a decade after a comparable effort in 2009, the last time the rooms and lobby spaces were updated. The hotel’s ballrooms and meeting spaces were renovated in 2014.

Connie Brewer, the hotel’s sales and marketing director, said the timing of this latest round of renovations is a requirement of Marriott International, which franchises its brand to hotel owner Apple Hospitality REIT, a downtown-based real estate investment trust.

“To maintain their flag, you are required to do a renovation every seven to 10 years,” Brewer said of Marriott International.

Brewer said an exact project cost won’t be known until the work is completed, but she described the renovation as a multimillion-dollar project. The 2009 renovation totaled $14 million.

“They’re very proud and very passionate about this asset, so they are going beyond the scope of work that Marriott requires,” Brewer said. “The amount of money and the attention to detail that they’re putting into the project is beyond what Marriott as a franchise company requires.”

An Apple REIT spokeswoman did not return a call seeking comment.

The company is a publicly traded REIT and owns several Marriott-branded hotels and others in the Richmond market. Its local portfolio includes the Courtyard Marriott and Residence Inn in Shockoe Slip, and it just closed last week on its $7 million purchase of The Berkeley Hotel at 1200 E. Cary St., bringing its national hotel count to 234. 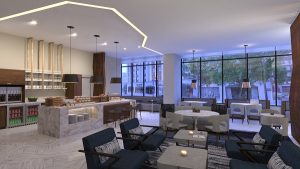 A rendering of the M Club space. (Richmond Marriott Downtown)

The renovated downtown lobby will include Marriott’s branded M Club, where guests can have access to Wi-Fi, snacks and beverages, and concierge service. Guest rooms will be updated with new furniture, fixtures and flooring, as well as enhanced in-room technology, fresh artwork and modern bathroom touches.

Florida-based Land-Ron is the general contractor on the project, which was designed by 3877, a Washington, D.C.-based architecture firm. HotelStudio, with offices in D.C. and Texas, handled interior design.

Brewer said the new restaurant will not be announced until the renovations are finished. While it will be managed in-house, she said it would not be a national chain or a hotel-specific restaurant like T-Miller’s. The hotel is managed by Indiana-based White Lodging, which Brewer said also would manage the restaurant.

Brewer said the renovations also are aimed at competing with other hotels in the market, including the nearby Hilton Richmond Downtown, which added local restaurant La Grotta as its in-house eatery in 2016.

Other hotels have been updating their facilities as well.

In 2017, the former Crowne Plaza Richmond on Canal Street rebranded as Delta Hotels by Marriott after a multimillion-dollar renovation. The 298-room hotel is owned by Sandhu Corp. of Virginia, an affiliate of Richmond-based SMI Hotel Group.

The same year, The Jefferson Hotel wrapped up a four-year renovation, reducing its number of rooms from 262 to 181 with expanded floor plans. The century-old hotel is owned by locally based Riverstone Group.

The downtown Marriott renovations also come as the city is weighing the proposed Navy Hill redevelopment, which would include a 527-room Hyatt Regency hotel to supplement the Greater Richmond Convention Center.

Brewer said she welcomes the potential competition, which she said is needed in the Richmond market. While the Marriott, Hilton and other nearby hotels help put up convention center users, she said the center would better compete with other cities for larger events with more available rooms available in the market.

“We need another hotel of our size, which is what that Hyatt and the Navy Hill project are proposing,” she said. “There’s just not enough supply of large hotels that are in close proximity of the convention center for them to win those large pieces of business.

“Yes, it’s going to be competition, but it’s competition I welcome, because then we can pursue bigger pieces of business and compete with cities like Baltimore and Atlanta that we’re losing business to because we don’t have enough room nights.”

What would it take to remake the exterior? It’s one of the ugliest and most dated looking buildings in that area of Richmond.

Personally, I hope they never redesign the the tower beyond some paint updates. It is a nice example of the style (Omni as well) and has aged well. I could, perhaps, see reworking the ground floor.

Careful what you wish for. If recent downtown designs are any indicator, it would become a giant glass cereal box.