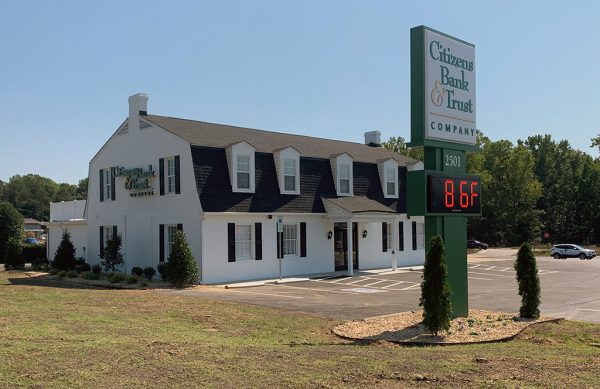 After snatching up a competitor’s former headquarters, an area bank is open for business in its first full-service branch in Powhatan County.

The building previously was home to New Horizon Bank, a small Powhatan-based institution that moved out of the space in 2018 in favor of a newly built headquarters nearby.

Citizens paid $1.2 million for the property, according to county records.

Citizens Chief Executive Joe Borgerding said the bank did heavy renovations both inside and out, with Fastrac General Contractors handling construction. American Commercial Interiors did the design work.

“It was built back in the late ’60s or early ’70s,” he said. “We totally renovated it, gutted it and redid everything.”

Citizens now has 12 branches, including four in the southern outskirts of the Richmond metro market in Chester, Colonial Heights and Amelia. Those three local branches held a combined $77 million in deposits as of June 30, according to the FDIC.

Borgerding said the decision to open in Powhatan was due to the bank’s steady loan growth in Powhatan since setting up there with a small loan office in late 2017.

“It ties in well with our branches in Chester, Colonial Heights and Amelia,” Borgerding said.

The loan office was helmed by Jimmy Keller, a veteran Powhatan banker who also is leading the new branch. The building is familiar territory for Keller, who was founding CEO of New Horizon before leaving in 2017.

Borgerding said the bank has been pleased with the traction it has gained in Powhatan in the few weeks the branch has been open. And he said they’ll continue to push for market share.

“It’s really exceeded our expectations to date, but we’ll be doing additional marketing in the area,” he said. “We’re looking to be fairly aggressive.”