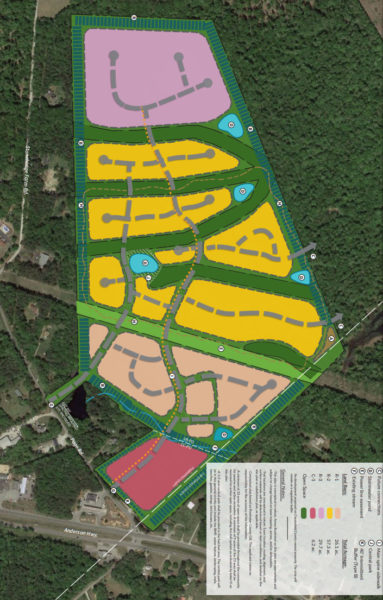 The developer behind some of the Midlothian area’s more established residential communities received an icy reception to its latest proposal in nearby Powhatan County.

Powhatan supervisors last week voted down a plan by East West Communities to develop nearly 250 homes on 120 acres at 1318 Page Road, on the north side of Route 60 a mile west of Westchester Commons.

East West, whose communities across the county line in Chesterfield include Brandermill, Hallsley and Woodlake, had proposed developing the former Ellis Farm property into as many as 249 homes with 7 acres of commercial frontage along Page Road, across from the Shell gas station at Page and Anderson Highway.

Plans called for primarily detached houses of up to 5,000 square feet in size, with up to 50 of the homes potentially townhome- or duplex-style attached units, each limited to 4,800 square feet. A project summary described the development as a walkable community with sidewalks, dog parks and pocket parks, with 23 acres reserved for open space and 9 of those for recreation, including a trail system.

The project was met with opposition from speakers at a community meeting in June and in two Planning Commission hearings in August and October. According to county summaries, 21 people spoke in those hearings, citing concerns about the project’s impacts on area roads, public facilities and the character of the surrounding area.

In their assessment, commission members discussed the project’s phasing, mix of housing types, proposed transportation improvements and other topics before voting unanimously to recommend denial. County planners listed several pluses to the project, such as its housing-type mix and location in a designated growth area. But they also said the project would negatively affect adjacent roads and did not address potential impacts on schools, parks and public safety.

Conditions proffered by East West restricted access to the development to Page Road. The developer also committed to installing a restricted crossing U-turn intersection at Page and Anderson Highway once traffic counts required it. The intersection design would have prohibited left turns onto the highway, using signalized U-turns to reduce the frequency of signal changes.

The case went to county supervisors at their Oct. 28 meeting. Minutes of that meeting had not been posted as of Monday.

A call to East West project manager Daniel Jones was not returned. The firm was represented by Chris Schust with Midlothian-based Balzer & Associates, who did not return a call seeking comment.

County property records show the land is owned by an entity called New County Line Farm LLC, which bought the three parcels that comprise the acreage for $275,000 in 2014.

East West has remained busy since developing Brandermill as its first community in the 1970s. The firm purchased Hallsley in 2013 and has been building out its remaining lots. The company also developed Patriots Landing in New Kent County.

More recently, East West has ventured into Hanover County, where it is collaborating with developer Willie Goode on a 400-home development on the former Giles Farm along Atlee Station Road.

good for powhatan. We need development, but density in the city center, not sprawl.