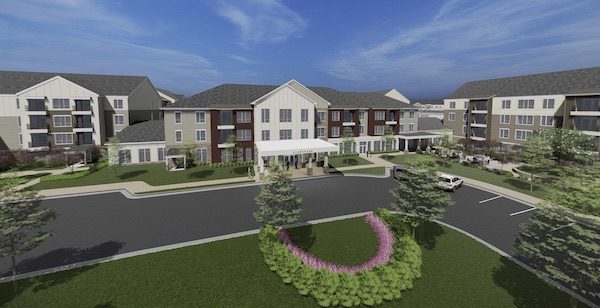 A rendering of Avery Point. (Courtesy of Moseley Architects)

Work has begun on a sprawling retirement community in Goochland County.

Whiting-Turner is the project’s general contractor.

Once completed, Avery Point will have over 2 million square feet of living space and more than 50,000 square feet of space for restaurants and a library, as well as new roadways.

The privately held developer filed plans for the project in April 2018, and soon after paid $23 million for the project’s 94 acres. The seller was an entity tied to Bill Goodwin’s Riverstone Group. 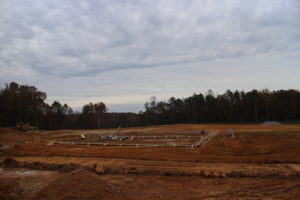 Erickson has 20 retirement communities nationwide, with more on the way. Avery Point will be its third in Virginia, joining locations in Springfield and Ashburn. Jim Antonakos, director of sales for Avery Point, said the company also is working on a Fairfax location.

Avery Point will consist of 14 buildings, all of which will be either four or five stories tall. Of its 1,400 units, 240 will be for assisted living, with the remainder being independent living.

While residents won’t be moving in until 2022, Antonakos said a 5,000-square-foot sales center is set to be completed in April 2020. 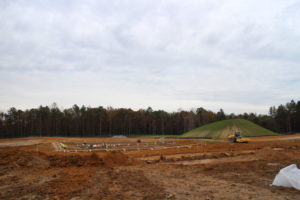 “It’ll have interactive floor plans and tours to give an idea of what life will be like,” Antonakos said of the sales center. “Eventually we’ll go to a reservation process … but that won’t be until (the sales center is) open for about a year.”

Avery Point was initially tabbed to cost $200 million, but Antonakos said the figure will be closer to $300 million.

Entrance deposits for Avery Point will start at about $200,000, Antonakos said, $160,000 of which is refundable and can be used to pay monthly care and service rates, which are to be determined.

Avery Point will be just west of Sheltering Arms Hospital and VCU Health’s joint rehab institute, which is scheduled to be completed in spring 2020.

Another retirement community, Tuckahoe Pines, is in the works in Goochland at 12330 Patterson Ave. Nebraska-based Resort Lifestyle Communities is behind the $30 million, 130-unit project.

Senior living communities are the biggest real estate tax cash cows in existence. There’s no question we need more and more of them, but the concern is providing qualified trained employees to service the growing population of seniors. Career opportunities abound for those who enjoy people and caring for them.

I am surprised this is how developers see the future of an ageing population. The nearby medical facilities are a good thing, but the absence of everything else makes for a very isolated existence. Nowhere to walk to, no convenient restaurants or stores, no public transport.
I see more and more empty nesters leaving the counties and heading downtown for the convenience and lifestyle afforded. I don’t see them then heading back out to the now-even-furthest-edges after living the neighborhood life.

A lot of the reason for ones further out is people who already live in the suburbs are moving their parents closer to them so they can visit them. In many cases it is people moving their parents from a rural area to be near where they live because the facilities in those areas don’t have the same amenities or level of care as these new facilities. that being said, I think malls like short pump are missing out on an opportunity. Not only would a facility like this next to a mall offer an opportunity for residents, but could… Read more »

Looks like it is 5100 Monument and it is condos. Maybe it has just naturally gone older residents. MLS listings don’t say anything about age restriction. You would have to ask Willow Lawn what impact it has had on them. Doubt it has had a negative one. I don’t think a retirement community would save a dying mall, but I do think it is an opportunity some healthy ones may be missing to use some of those seas of parking.

I wonder if anyone looking really long term. Fewer Gen-Xers like me than Baby Boomers who’s population is declining. The biggest population group is Millennials and they are several years off from needing these facilities. In 20 years are we going to have a glut of units at these type facilities?

Don’t confuse percentage of population with the actual number of those 65 and over. While millenials may now be the largest percentage of the population the actual number of people 65 and over is still increasing. This is mainly because people are living longer and boomers are only a part of that age group. There is going to be a period where the need will wane, but new facilities may continue to be built since they may offer amenities older ones don’t.

Congrats on the new expansion. Just my two cents… one thing I consistently see developers overlook as they continue building (or expanding) senior care communities is the inclusion of remote ADL (activities of daily living) monitoring. By that, I do not mean cameras or wearables. LOL In fact, the Atlanta Journal Constitution is doing a huge investigative piece on senior care centers throughout Georgia. Families want to know that their aging loved ones are being taken care of well, and yet most don’t live right around the corner to continuously visit and check in. Meanwhile, Executive Directors are faced with… Read more »