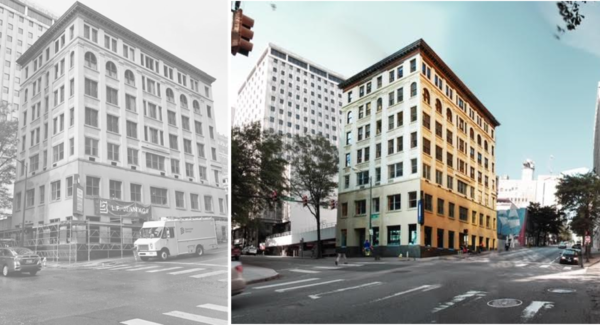 An illustration of what the former Stumpf Hotel property at 728 E. Main St. will look like once completed in July 2020. (Rendering courtesy ADO)

A prolific Washington, D.C.-based developer with a hefty downtown Richmond portfolio is reviving a long-dormant relic in its collection.

Douglas Development purchased the century-old building, along with a two-level parking deck at 6 N. Eighth St. that wraps around it, in 2004 for $950,000, according to city property records.

Combined, the properties most recently were assessed by the city at about $2 million.

Plans call for the seven-story structure to be converted into 24 one-bedroom apartments above 2,300 square feet of ground-level commercial space, King said.

“We feel that it would make for great office space,” King said of the street-level space. “We’re open to options that we see are going to be a good fit for the building.”

Douglas Development owns more than 20 buildings in Richmond, and its holdings are dense around the block bound by First, Second, Broad and Marshall streets — including the 23-story, 240,000-square-foot former Central National Bank tower that the company converted in recent years into 200 apartments, called Deco at CNB.

The Stumpf building apartments’ rents will be market rate, King said, with units ranging in size from about 545 to 790 square feet. In the Central Business District, several market-rate one-bedroom units are currently renting from $990 to $1,150 a month.

“Once these units hit the market, we expect for them to lease up quickly,” King said. “There seems to be a very large demand for one-bedroom units in the market right now. We see this as an opportunity to capitalize on the area’s growth.”

Residents will be able to lease parking onsite and use several of the amenities at its Deco at CNB building at 219 E. Broad St., including its clubroom, rooftop terrace and fitness center.

King said crews are hoping to complete the project by July 2020.

Newport News-based Drucker & Falk has been retained to manage and lease up the property. A new name and brand for the building is under development. 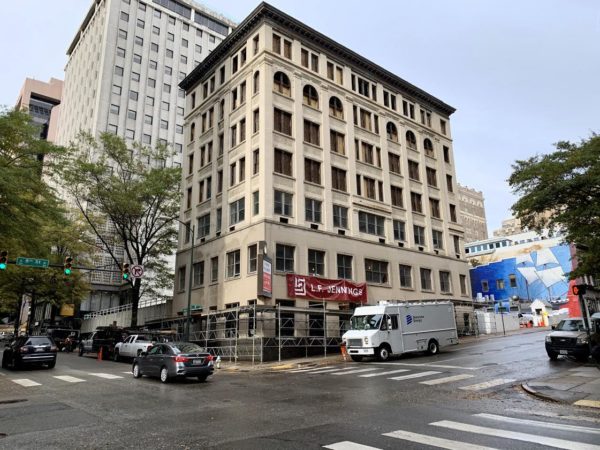 The former Stumpf Hotel was completed in 1910. It’s been vacant for over 20 years. (J. Elias O’Neal)

While the apartments and commercial space are bringing new life to the building, the uses are not new to the former Stumpf Hotel.

E.A. Stumpf, who developed the hotel and financed its construction in the early 20th century, announced in a March 1901 newspaper article that “a large portion of the building will be leased for apartments and offices.”

“The building will be thoroughly modern in all particulars,” the article stated about the Stumpf Hotel development.

Stumpf Hotel opened in 1910 and was designed by the late Carl Ruehrmund, according to several records. Ruehrmund, a well-known Richmond architect in that era, designed several residential and commercial properties throughout the city’s urban core, including the now-named Commonwealth Senior Living apartment building at 501 N. Allen St. that formerly was called the Shenandoah Apartments.

It’s unclear when Stumpf Hotel officially closed, but the building has sat vacant for more than 20 years.

Given the city’s growth and demand for new apartment product, King said redeveloping the former hotel as residential units is the right use for the property.

“You can’t beat the location,” King said. “Richmond is a great city that is seeing tremendous growth, and we’re glad to see this project moving forward.”

I have always admired that building on my walk to work, and am thrilled to see it finally being restored to its former grandeur–it should be a great addition to downtown.

Same here! I walk by it twice a day, and I had no idea this is what it was. Looking forward to seeing it when it’s done!

great to see another building in downtown brought back

A lot of people ask me about “my building” at 728 East Main, and I always correct them laughing that, while this location is amazing, owning a building is a tad out of my budget at the moment. What actually happened was, through the generosity of owner Douglas Jamal, I participated in a program in 2007 called “Vacant Spaces, Artful Places,” which featured art by Richmond artists in the windows of vacant buildings in our city. Not only would it beautify the city (versus having bars on the windows, placards, etc) but it would give artists exposure they might not… Read more »

So excited to see Douglas Development in the Richmond market. Douglas Jamal single-handedly transformed downtown DC from a place everyone left (read: ran from) at the end of the work day to a vibrant city center, particularly around MCI/Verizon/Capitol One Arena. He was honored a few years ago with a well-deserved lifetime Preservation Award by the city’s Preservation office.

You may be one of the few that is excited. I’m glad to see this one getting done though. Most of what he owns in Richmond sits vacant with little sign of anything about to happen. It has been that way for a long time. Some facade improvements have been made, but little else. Many would prefer him to sell so something could be made of them. If anything he is holding back downtown Richmond from it’s full potential. Most of the vacant buildings near 2nd St and Broad are owned by him. Some of them are falling apart literally… Read more »

That’s his strategy. Sit on these structures, which all break city code but hey who cares, and play the speculation game. Meanwhile they have their massive office with their massive flag flying prominently in NW DC. As someone who lives in the neighborhood where Douglass owns many blighted and boarded up blocks, it amazes me that the city lets him get away with this. Fix your falling facades, your caved roofs, and broken windows. Or sell!