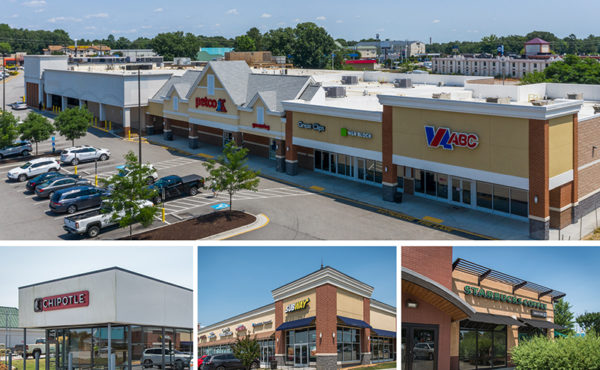 A national grocery store chain has unloaded a Chesterfield shopping center it picked up two years ago in the wake of a high-profile merger involving its parent company.

The transaction closed Nov. 26, said Catharine Spangler of Thalhimer’s Capital Markets Group. It was recorded with the county Dec. 2.

Giant purchased the seven-building, 15-acre retail center two years ago for $13.7 million. It most recently was assessed by the county for $10.3 million, according to property records.

No plans for the center had been filed with the county’s planning division as of Wednesday. A call to GBT was not returned Wednesday afternoon.

This is GBT’s first acquisition in Virginia. GBT owns and develops mixed-use and retail properties across much of the South and Midwest, according to its website.

Located at the intersection of Jefferson Davis Highway and West Hundred Road, Bermuda Square has two multitenant buildings totaling 84,000 square feet. They include retail and restaurant tenants such as Great Clips, Petco, Virginia ABC and Subway.

A 0.7-acre outparcel at 2501 West Hundred Road, which has served as a makeshift parking lot for the retail center, is slated to be developed for a Valvoline Express Care Center, Spangler said.

The sale is the latest in a string of transactions dating to Bermuda Square’s development in the late 1970s, when it was one of the largest retail developments in North Chesterfield.

Property records show DDR Corp., an Ohio-based real estate investment trust, purchased the complex in 2003. Prior to unloading Bermuda Square to Giant, DDR in 2015 invested in a $17 million overhaul that was planned to include a new 66,000-square-foot building on a 6-acre site to relocate the center’s Martin’s grocery store.

Martin’s had operated a 35,000-square-foot store in Bermuda Square for years. However, the store closed in August 2017 as part of a merger between the parent companies of Martin’s and Food Lion.

As part of its agreement with the Federal Trade Commission, the combined company, Ahold Delhaize, had to divest 86 U.S. stores, including 10 in metro Richmond. Publix purchased 10 of the 19 Martin’s in the region, but the Bermuda Square store did not make the cut.

Bermuda Square’s sale caps off a flurry of new commercial investment occurring along the Jefferson Davis and West Hundred corridors, which has attracted several other national retailers through the years, including Dollar Tree, Home Depot, Target, Kroger and Food Lion.

Not too far north of Bermuda Square, a new Panda Express and Popeyes are under construction. Across the street, an 11-acre site previously filled by a Kmart store in the Breckenridge Center was redeveloped last year and now houses several national retailers, including T.J. Maxx, HomeGoods, Ross Dress For Less, Ulta and PetSmart.

A Harris Teeter or Wegman’s would fit nicely, and I would be delighted to shop in either.

Harris Teeter is Kroger. They are not going to open one in RVA. And Wegmans????? Yeah Newport News was too poor for Wegmans so I seriously doubt South Chesterfield off Jeff Davis will make their cut. Our grocery market is tapped out.