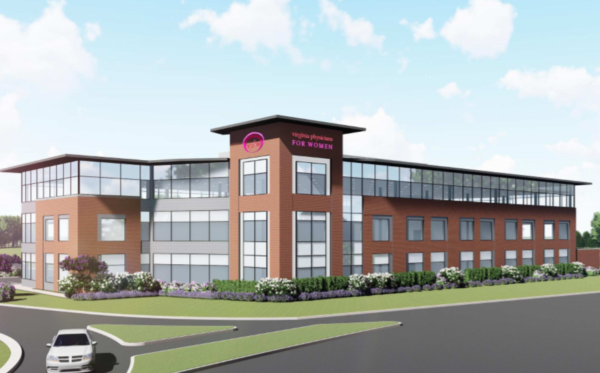 Virginia Physicians for Women is planning to construct a 60,000-sqaure-foot facility along Koger Center Boulevard in Midlothian to serves as a clinic, administrative headquarters and the company’s surgical center. (Courtesy Price Simpson Harvey)

Fueled by its niche of treating women, a local medical group has big plans to grow in Chesterfield.

The group is planning to construct the three-story building on 2.5 acres at 1218 Koger Center Blvd. near Chesterfield Towne Center in Midlothian.

The company’s existing Midlothian clinic, surgical center and headquarters are housed in 30,000 square feet it has leased for nearly 15 years in the Fairfax Building at 10710 Midlothian Turnpike, said VPFW CEO Ronald Milligan.

VPFW plans to launch construction on the project by April 2020, taking roughly 12 months to complete.

“Our lease is up in May 2021,” Milligan said of its Fairfax Building location. “We’re hoping to move into our new location by April 2021.”

Plans call for VPFW to occupy nearly half of the new building, giving it room to double the size of its surgical center that’s used by all 30 physicians in the firm’s network. It also plans to expand several of its existing services at the site, which include OB-GYN care, mammography and urogynecology.

The remaining 30,000 square feet would be leased to other medical office users, Milligan said.

To help address ingress and egress into the planned medical facility, VPFW requested approval to construct a new right-in/right-out entrance off Koger Center Boulevard, along with a new right-turn lane.

The Chesterfield Planning Commission recommended the plan for approval on Tuesday and it’s set for a vote before the Chesterfield Board of Supervisors in January.

The VPFW site is part of a 9.7-acre property owned by Woodland Real Estate, according to county real estate records.

VPFW is under contract to purchase its portion of the property for an undisclosed amount sometime in March 2020, Milligan said.

“It was the perfect location for us,” Milligan said. “When you come up Koger Center from Johnston-Willis (hospital), and make that turn, the property sticks out once you pass Virginia Credit Union, giving us the visibility we need.”

Another 2.5-acre piece of the property is under contract to Pet Paradise, which plans to build a $2 million pet boarding facility.

That would leave a third, roughly 2.5-acre site to the north of the future Pet Paradise.

VPFW’s Midlothian expansion is part of the company’s multiphased growth plan to improve facilities and patient care across Central Virginia.

“We want to retain our high quality of care and remain competitive in the region,” Milligan said.

For phase one of its growth strategy, VPFW recently completed construction of a $9.9 million, 15,000-square-foot clinic in the Puddledock Medical Center at 1775 Lake Harley Drive in Prince George in July, Milligan said, roughly doubling its clinic footprint in the Tri-Cities area.

It also plans to construct a new medical facility somewhere in the West End around 2024, Milligan said. The company is still mulling locations and size of the facility.

“Growth is a good problem to have,” Milligan said. “And we’re glad to be adding to the area’s continued development.”