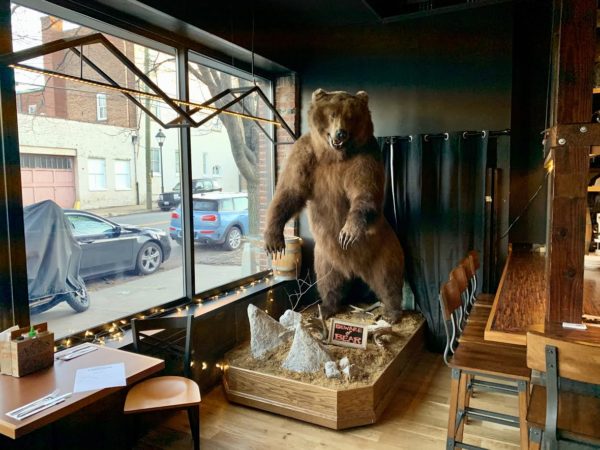 A large stuffed bear greets patrons in the dining area of the Frontier by Alamo restaurant. (Photos by J. Elias O’Neal)

First, in September he purchased the remaining parcels that house his longtime restaurant Alamo BBQ at 2202 and 2204 Jefferson Ave. for $204,000, according to city property records. 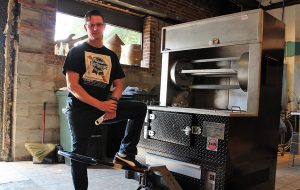 Then in October, he and wife and co-owner Juliette Highland quietly opened Frontier by Alamo, their new restaurant around the corner at 412 N. 25th St.

Davis first opened Alamo with Paul Hubbard in 2009, just as Church Hill was starting its resurgence.

For years they leased the 0.2-acre plot located at the traffic circle near Jefferson Park. 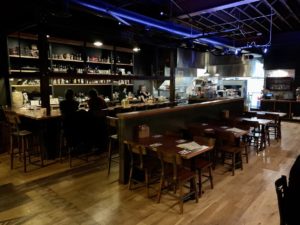 The restaurant seats up to 53 people in its main dining area and the bar.

That began to change in 2014, when Davis bought one of the three parcels on which Alamo sits. He paid $12,000 for it. Finally, in October, he bought the other two, which most recently were assessed by the city for $146,000.

“It’s great because we’re locked into that location,” Davis said of the acquisitions. “It gives us some time to decide what we want to do at that location.”

Davis said he has no immediate plans for changes at Alamo, but that the long-range plan is to make Alamo more suitable for year-round dining. It currently offers only outdoor seating.

“Right now, our primary business seasons are during the spring, summer and early fall,” Davis said. “But it seems during the last couple of seasons fall comes and goes pretty quick, then it’s winter. So, whatever we do, it’s going to be something that will help us stay open all year.” 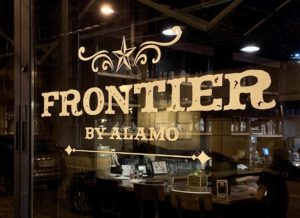 Alamo by Frontier opened in October at 412 N. 25th St. in Church Hill.

Like the Alamo deal, Frontier was years in the making.

Davis purchased the building about two years ago to serve as an extension to Alamo’s busy catering business. But in 2017, given the size of the space, he decided to add dining and give Alamo a sister restaurant.

The building previously hosted a string of soul food restaurants dating back to the 1950s, including Johnson’s Soul Food, which relocated to Union Hill before closing.

Davis, who honed his skills in kitchens around Houston before coming to Virginia, wants to maintain the Texas frontier vibe at his restaurant, where customers are greeted by a large stuffed bear in the dining room, low lighting and the smell of smoked mesquite wood burning in the oven. 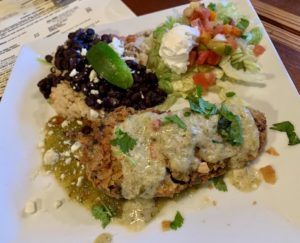 “I think I was at a Cracker Barrel and I saw the bottled soda section that carried Big Red,” Davis said. “I knew I wanted to have it stocked at Frontier.” 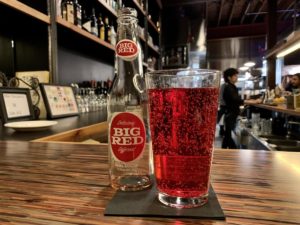 Big Red soda, a signature Texas drink, are part of the beverage menu at Frontier by Alamo. Several other mixed drinks, beers and wines also are available.

Davis and Highland opened Frontier for dinner in October, with hours starting at 5 p.m. Tuesday through Sunday. Eventually it will offer lunch. Highland said that may happen in the New Year.

Frontier seats about 53 people in the main dining area and at the bar. The restaurant also is available for parties and company events, Highland said.

Once the location catches its stride, Davis said he’d like to offer more prepared meals to patrons who live in the neighborhood.

“Smoking a large chicken and offering a few sides for people to pick up for dinner is something we’re going to look forward to doing,” Davis said.