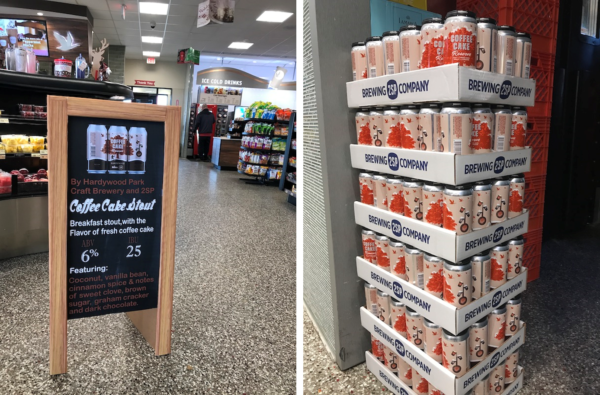 Wawa’s road to get into the craft beer business led it to a local brewery.

Hardywood produced the beer with Pennsylvania-based 2SP Brewing Co., which began collaborating with Wawa on a beer last year after Wawa’s coffee roaster wanted to get its brew into a local craft brewer’s beer. It looked to 2SP, whose brewery is in Aston, Pennsylvania, just a few miles from Wawa’s headquarters.

“2SP’s head brewer Bob Barrar is really well-known as a stout brewer,” said Hardywood co-founder Eric McKay. “They call him the medal machine, because I think he’s won a ton of medals for their imperial stout, ‘The Russian.’”

2SP stout made with Wawa coffee was a hit in Pennsylvania, drawing lines out the doors.

For 2019, Wawa and 2SP sought to work with other brewers on the East Coast, and 2SP recommended Hardywood since they’d collaborated on beers together in the past.

Shortly after, Hardywood co-founder Patrick Murtaugh and head brewer Brian Nelson took a trip to Wawa’s headquarters and test kitchen in Pennsylvania, where they traded ideas with 2SP and Wawa’s folks for the brew.

“We’re decent at doing what we call “pastry beers” or “dessert beers” such as our Gingerbread Stout and leveraged ideas for what ingredients to use as a base,” Nelson said.

Upon settling on coffee cake stout, Hardywood and 2SP brewed about 100 barrels of the concoction at 2SP’s brewery.

“It’s definitely a lower ABV (for us), but it’s more approachable, I think, as far as drinkability,” Nelson said.

Four packs of 16-ounce cans are available for $13 at 32 Wawa locations throughout Richmond, as well as at Hardywood’s taprooms.

Though it’s a bit of an unorthodox trio to work together on a beer, McKay said it was fun to work with another brewery known for its stouts.

“Collaborating with convenience stores attached to gas stations isn’t something craft brewers generally do,” Murtaugh said. “When we finally got a chance to visit (Wawa) at their headquarters, it really drove home that it’s a high-class operation in their approach to research and development.”

The Wawa deal capped a busy 2019 for Hardywood. It’s working on adding a restaurant to its West Creek production facility, for which it recently raised nearly $1 million in investor capital. It’s also preparing to close its Charlottesville taproom that it opened in 2017.

Hardywood is a great addition to the region, love their products.