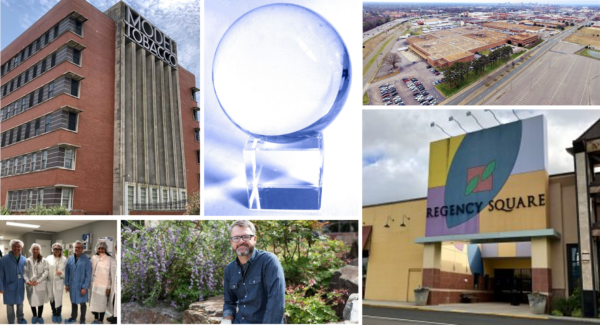 Below are BizSense’s story predictions for the new year. (BizSense file photos and courtesy Wikipedia)

An objective news publication must tread carefully when dipping its toe into the subjective waters of making bold predictions.

Nevertheless, we polished the ol’ crystal ball well enough to give you this guide for 2020. We see it less as a list of things we think will occur next year than what we think you need to watch for. 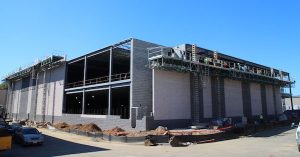 Statewide discussions about the future of medical and recreational marijuana are likely to come to a head in 2020. Five medical marijuana processing facilities are going vertical all over the state. Locally, Green Leaf Medical is building a $20 million facility in the city’s Southside, and that project, along with the other four, have upcoming state deadlines to be in operation during the new year.

Following November’s state elections that gave Democrats control of the entire Virginia legislature, there’s chatter that the upcoming General Assembly sessions will see a significant number of bills focused on further loosening regulations for medical cannabis, and possibly recreational use. 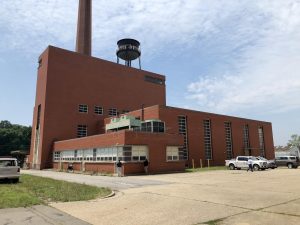 We can point to Manchester, but a lot of South Richmond is hopping with activity that likely will continue in 2020. Keep your eyes on Blackwell, Maury and Swansboro, as investment begins to spill over from Manchester into those neighborhoods. The Jefferson Davis Highway Corridor also is important to monitor, as the city and Chesterfield County begin to target areas of blight along the aging thoroughfare for redevelopment. Forest Hill also continues to evolve, and the neighborhood will see the completion of a new mixed-use development that will bring hip tenants such as The Veil Brewing, Stella’s Market and Charm School ice cream to the area.

A sizable portfolio of Southside real estate holdings – and one man’s freedom – are at stake as the legal saga of embattled local mortgage executive Michael Hild will play out in 2020. His trial is set for October. 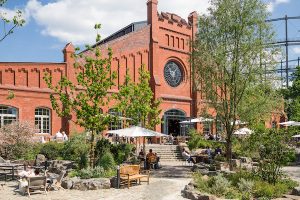 March 2020 will mark two years since Stone Brewing Co. and the city asked for permission to demolish the Intermediate Terminal Building at 3101 E. Main St., which originally was slated to house Stone’s World Bistro & Gardens. In the 21 months since, Stone shuttered its German bistro and kept mum about its updated plans for Richmond’s bistro, saying only that they’re still in the design process. As it’s been since the beginning of the saga, it’s hard to forecast when Stone and the city will pick up steam on the project, but it’s likely 2020 will see news of some sort on that front.

Multifamily construction was among the hottest sectors of real estate development and investment, and it looks to stay that way across much of the region heading into 2020.

Look for places such as Manchester, Scott’s Addition and Shockoe Bottom to continue growing to new heights. Traditional suburban office parks such as Innsbrook in Henrico and The Boulders in Chesterfield will continue adding residences to their properties in an effort to curb traffic, and bring people closer to employment and retail opportunities.

And it will be interesting to see how far the trend of apartment development bleeds into Chesterfield, Goochland and Hanover, where developers began thoroughly sinking their teeth in this year.

VCU has shown it’s not afraid to be aggressive in gobbling up real estate near its campuses, and with a new master plan recently approved, that trend may well continue in 2020. Perhaps most intriguing is the university’s interest in the Virginia ABC headquarters site near Interstate 95 and The Diamond, something that was outlined both in its master plan and by President Michael Rao. 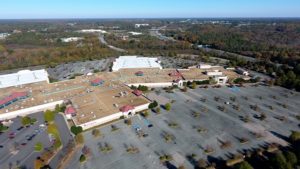 An aerial view of Virginia Center Commons mall, where a Henrico County arena is planned as part of a mixed-use redevelopment. (Henrico County)

Two of Richmond’s struggling malls – Regency Square and Virginia Center Commons – are getting shots in the arm that likely will continue to pay dividends in 2020. Their progress will be interesting to watch over the next year, as will the continued evolution of traditional retailers and its effects on the region’s traditional retail hubs.

Developers this year paid more than $1 million an acre in certain neighborhoods, such as Scott’s Addition, Jackson Ward and Manchester. It will be interesting to see how high and whether those premiums continue to climb, or if the numbers just stop making sense. It’s also fun to ponder what the next hot neighborhood will be. Anyone have any ideas?

Don’t sleep on the Tri-Cities 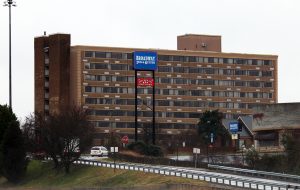 One BizSense commenter during the year called Petersburg “the next Brooklyn.” While that was likely tongue in cheek, it’s not far out to expect continued investment in the Tri-Cities area. Items to keep an eye on include the redevelopment of the former Ramada Inn along Interstate 95 in Petersburg, which at the moment serves as a bombed-out beacon of the unattractive sort. It also will be interesting to see whether the brewery scene will take hold in and around Hopewell, with at least two such ventures in the works as we speak.

Brookland Park is a neighborhood that’s been interesting to watch for the last couple of years and that will continue in 2020. Its crumbling anchor theater is in the hands of a developer with a vested interest in that part of the city. Another anchor to watch in the new year is the former American National Bank Building, which has been caught in a drama between its current owner and the city over a botched economic development grant. That part of the story is likely to reach a conclusion in 2020. 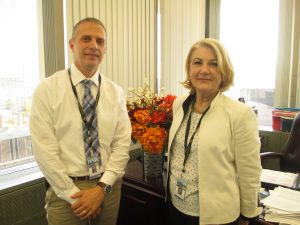 The gatekeeper for development in the city, its long-beleaguered permits and inspections office, has new leadership in place and a desire to change to keep pace with the growth of Richmond. Can they make good on their promises in 2020 and beyond?

Incremental development began to creep into this neighborhood that’s been marked by Henrico County officials as “Scott’s Addition 2.0.” It’s a safe bet that investment and transformation will continue in the Westwood area, which sits just west of the city line.

With the sale of their spice company complete, the Sauer family and its Sauer Properties have free reign, the funds and the desire to create a mini-city within the city. Their Sauer Center will be an entirely new neighborhood in the heart of Richmond, and they’ve only begun to give a glimpse of what they have in store for their prime properties.

This is the big count for the metro Richmond region, and it will be interesting to see what the full figures show and how much we’ve grown since the last count of 1.21 million people. Most interesting to watch will be the headcount in the city of Richmond. Its population is likely to have broken the 230,000 mark, setting it on course to tie or exceed the number of residents that lived in the city in 1950 before nearly four decades of decline.

Census figures are an important economic indicator for developers and investors. If the region is gaining residents, it’s a positive sign of people’s desire to settle in the location. That ultimately drives a variety of economic opportunity and growth.

We saved this one for the end, if only because it’s the most obvious topic that needs to be on this list. It’s a fool’s errand to try to predict whether the Navy Hill development will come to fruition in 2020. Will City Council strike it down entirely or will a majority ultimately come around? Will the developers cave to the opposition? Or do they have some other ace up their sleeve to play in 2020? Two things are certain: It’s likely never a good idea to bet against the likes of Tom Farrell and his buddies; and one should never underestimate Richmonders’ skepticism for tax-payer funded economic development. This one will be fascinating to watch.

The only thing I except out of the old Model Tobacco and the hotel redevelopment in Petersburg is more lip service from the developer, hype from BizSense, and maybe a bank foreclosure/city incentive recall. I hope Petersburg filed a good lien on its C-PACE program. 36 months into the Petersburg project. the developer has been cited for code violations and couldn’t remove falling pieces of the old building. It was boarded up with plywood (and still has a missing wall). Harrrison is down in Winston-Salem these days promising a high end hotel and apartments redevelopment of the old RJR tobacco… Read more »

Michael;
What is a C-PACE program?
thanks

If improvements are made to the energy part of a building (generating or consuming – think HVAC, lighting etc), then a loan can be had with repayment essentially coming out of the savings made. It can be a very attractive source of improvements funding and is relatively new to Virginia. Well worth looking at for any project that rehabs or improves commercial buildings.
The Virginia PACE Authority staff are very knowledgeable and give fantastic advice.

Garry;
Thanks that is a helpful and useful response!

Well done write up Next hot neighborhood? Scott’s Addition. People keep saying it’s at the top, but the truth is its only in the 3rd inning at most – most projects are still in the announcement stage, and most of the neighborhood is still light industrial uses. When thousands of people move in, which will be happening soon, it’s going to drive a lot of new business. The feedback loop effect is going to be really noticeable. The other thing that will shock people is the 2020 census. From what I see on the ground, Richmond’s population has really increased,… Read more »

A tip of the hat to Richmond BizSense for calling Navy Hill what it really is: “tax-payer funded economic development”.

As we know only too well, the Jeff Davis (when are they going to change that name?) Corridor – still has a significant violent crime problem. The question becomes, does development drive out the crime, or do you have to get a handle on the crime before the development can be successful? As for us, we had a family member murdered and our building torched. We aren’t going back.

I’m very sorry to hear about your family member, that’s tragic. There’s still no reason to throw out a general term like “South Richmond” in relation to violent crime. It’s like saying “Downtown Richmond” is dangerous because of what happens in a two-square block area of Shockoe Bottom a couple of times a year from 12 am to 3 am. There are hot bed areas and there are safe areas as with most parts of the City. Pretty sure it can be argued that changes have already happened here. Speaking with my neighbors here in Blackwell, things used to be… Read more »

Jeff, I don’t see “South Richmond” mentioned. Just “Jeff Davis” and “corridor”, which is pretty specific. Blackwell lies adjacent to, and to the east of Jeff Davis to Commerce as far as I know. At least it did when I lived near there 50 years ago. Perhaps the boundaries have shifted since I lived in the area.

I believe the OP edited their post. You are correct about Blackwell. I think Google maps is fairly accurate about it though it has the warehouse district off Hull near the river labeled as “Old Town Manchester” and “Manchester” as a neighborhood to the South of Blackwell.