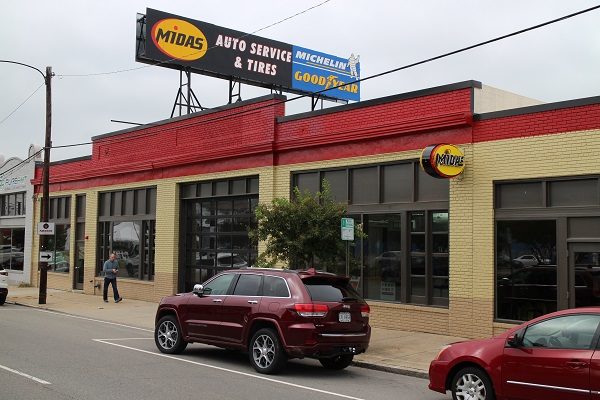 A year after committing to a new store in Scott’s Addition, a local car care chain is getting a brief taste of business there to come while preparing to open its doors for good in a few weeks.

Midas of Richmond temporarily opened its newest location at 1208-1216 Arthur Ashe Blvd. late last month, while awaiting replacement windows that owner Mark Smith said are the last piece needed before the store can open for the long term.

He said he’s hoping to have the store permanently up and running by late February. 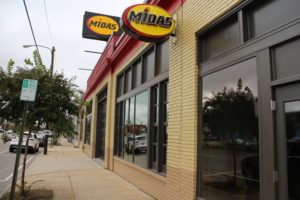 Midas signage has gone up at the location, which is slated to open in a few weeks.

Smith said he was aiming to have the location fully opened by now, hinted at by a “Yes, we’re open” sandwich board sign that could be seen in the store in recent weeks. The 15,700-square-foot space previously had been renovated as Smith fielded potential tenants for the building, which he purchased in 2017 for $1.27 million.

Smith ultimately decided to go forward with his original plan to convert the former North American Transmission building into Midas of Richmond’s fifth store. But in the months that followed, he said a closer look by the Virginia Department of Historic Resources found the rehab had involved incorrect windows on the building’s west-facing and north-facing sides.

“We had the windows put in, and we came in for our inspection. DHR said these windows are supposed to have ‘lights’ in them. In the middle of each – they’re 8 by 14 – there’s supposed to be a section that folds out,” Smith said.

He said the windows installer looked again at the blueprints, acknowledged the oversight and offered to pay for replacements out of its own pocket.

Because those windows, delivered in pallets, will fill the space as they’re being installed, Smith said the store cannot fully open until the work’s done – hence the delay until next month. He said he’s aiming to open the store by Feb. 22, when the franchise will hold its first blood drive of the year for the American Red Cross.

“If we get crazy lucky, we’ll be open in February,” Smith said. “It’ll be our first blood drive here. Ideally we’ll have a blowout grand opening then.”

Correction: Midas’s blood drives are with the American Red Cross and no longer with Virginia Blood Services. The Red Cross acquired VBS in 2018.

Virginia Blood Service[s] is no more. American Red Cross took them over a couple years back.

What a great project! The owner has patiently persisted in bringing this building back to life despite unexpected setbacks. It will be wonderful to have such a convenient Midas location. Congratulations to Mark Smith and his team!