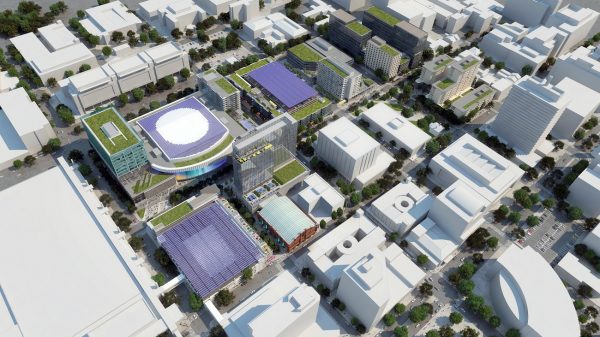 At a committee meeting Monday evening, council formally received the final report from its appointed Navy Hill Development Advisory Commission, and laid out a timeline to conclude its own review of the $1.5 billion project. The process continues with a series of public hearings that starts tonight.

The timeline aims for a final vote on the proposal before March, according to a schedule announced by council President Cynthia Newbille.

“We have a timeline before us, with completion by the end of February,” Newbille said Monday after detailing steps to be taken in the meantime.

With the advisory commission’s review completed – its report generally giving a thumbs-down to the arena portion of the project, among other findings – those steps include:

• Council’s responses to that report, which Newbille asked members to submit by the end of this week;

• A closed session at council’s Jan. 13 meeting to compile a list of those responses, to be submitted to developer NH District Corp. (NHDC);

• NHDC’s answers to council’s responses, which council is requesting from the developer by Jan. 20;

• Report from council’s hired third-party consultant Johnson Consulting, with initial report tentatively due Jan. 31 and a final presentation due Feb. 10;

• Further back-and-forth with NHDC, with council aiming for a final vote before March.

Advisory commission findings
Council spent most of the meeting going over the findings of the advisory commission, which presented its report after submitting it to council and posting it online Dec. 23. 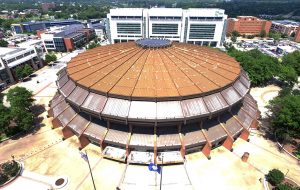 A majority of the commission, according to the report, found that the publicly funded portion of the project – the proposed 17,500-seat arena that would replace the Coliseum and anchor the larger Navy Hill mixed-use development – would not be “a sound and reasonable public investment.”

While a majority supported using tax-increment financing to fund the arena, revenue from which would go toward paying off $300 million in bonds that the city would use to fund the facility, the commission determined that Navy Hill as a whole would pose a risk to the city’s general fund and public school funding.

The commission was mixed on other findings, such as the project’s impacts on other city programs and existing businesses. Members also took issue with the project’s tax district base value and revenue projections, development schedules and infrastructure cost estimates. A majority concluded the project’s overall costs have not been reasonably estimated, contending that more data is needed.

NHDC has provided additional information in response to the commission’s findings. Those documents and others related to Navy Hill have been compiled on the city’s website here.

Multilayered review
The advisory commission started reviewing the project in October, with a series of mostly weekend meetings culminating in four public hearings that were held in mid-December. 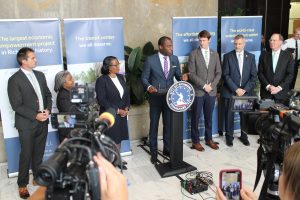 Council has held work sessions during that time to conduct its own review, with members also inviting NHDC to present the project at respective constituent meetings. Mayor Levar Stoney, who supports the project, held his own series of town hall meetings in November.

Late last year, council hired Johnson Consulting, a Chicago-based real estate and hospitality consulting firm, to provide a third-party analysis of the project, while NHDC announced it has lined up venue management company Spectra to manage the new arena.

NHDC has continued to rally supporters, through emails and other means, to attend public hearings, contact council members and volunteer in support of the project. And this week, ChamberRVA, which has endorsed Navy Hill, launched a radio ad campaign promoting the project.

The latest developments follow a busy year for Navy Hill. A recap of the project’s news in 2019 can be found here.

Quote from article: the commission determined that Navy Hill as a whole would pose a risk to the city’s general fund and public school funding.

Quote from Stoney: The Commonwealth needs to do more for Virginia’s children, especially those growing up in poverty. The RPS adopted budget demands a lot from the City of Richmond.

I’m for growth but not at the expense of the youth.

Limiting growth is done at the expense of youth in the future.

Growth isn’t being limited. People are building, renovating and moving in all over the city without this project, not because of it potentially happening. I can thankfully afford the tax increases but many people can’t. When hard working people get broke, a faction tends to get more desperate, which more often than not, leads to more crime. Smaller projects in this city have been mismanaged, so I’m hesitant to trust them with more money.

Andrew, it seems as though many people against it seem to make these meandering vague arguments that really never land anywhere. You claim growth won’t be limited then you make a detour about rising assessments (which help schools). Then another stop about the plights of poverty. Speaking of poverty, wouldn’t it be nice if a new development brought hundreds of jobs closer to working class neighborhoods of Northside and North Church Hill? I don’t see how you tie either to your points to the argument that growth won’t be limited. Just because there are houses being built elsewhere doesn’t mean… Read more »

James higher tax base won’t mean higher tax revenue. I was at the 5th district meeting this week and even the representative from Navy Hill said tax revenue would not increase in the first 5-7 years and some projects/reviews say it will take 12 year or more. That would be another school generation before more funds come into play UNACCEPTABLE! And an interesting point was made, the Navy Hill said TIF revenue would be based off a $350 million dollar tower DOM bullt (the one complete) and the City assessment is just over $307 million. That is mean even before… Read more »

Yes, it would take some time before additional revenues would be available for schools, but I would say that is better than them never being available if you do nothing.

One statement should not end the discussion. There may be ways to further mitigate that risk. These things often get revised many times before they come to a final agreement.