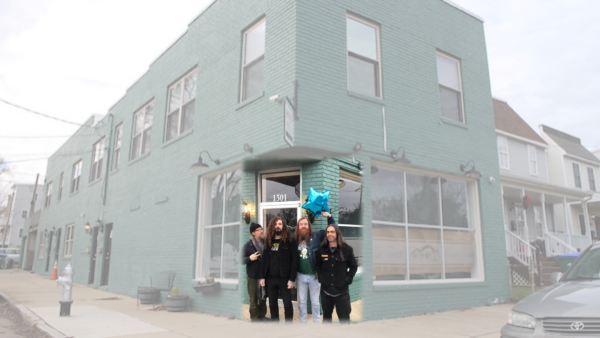 Hot For Pizza’s aiming to open this May at the corner of West Leigh and Norton streets in Carver. (Mike Platania)

“This is a killer restaurant and good-ass pizza, but they also have a cool bar.”

That’s the way Richmond restaurant owner Herbie Abernethy describes a few pizza places he’s visited in Brooklyn, New York – and it’s the way he hopes to get people thinking about Hot For Pizza, a new concept he’s preparing to open with his business partners at 1301 W. Leigh St. in Carver.

Hot For Pizza will be the second restaurant in the neighborhood for Abernethy and Josh Novicki, joining their Cobra Cabana at 901 W. Marshall St.

The trio brought on Al Copeland as a partner for Hot For Pizza. Copeland started working at Cobra Cabana shortly after it opened the former Black Sheep space in 2018.

Each of the four partners has backgrounds in either the restaurant or music industry. Abernethy is the vocalist for hard rock band Valient Thorr, Skotis plays bass for Iron Reagan, Novicki has owned a few restaurants in North Carolina, and Copeland owned Cous Cous, a restaurant and bar that formerly was at 900 W. Franklin St. near VCU. 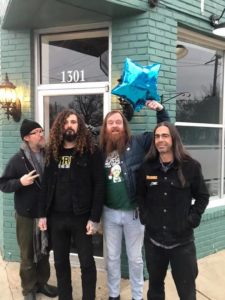 Abernethy said they’d been tossing around the idea of a pizza concept for a while, even as they were working on Cobra Cabana, and they never let the idea die.

“We actually have a bunch of stuff we lay on the back burner and decide if it’s going to work out (later),” he said. “It happens with my band. We’ll write something and maybe it’ll be for this album or we’ll recycle it and bring it back to the next album or something like that.”

Their move toward Hot For Pizza began to slowly heat up when the owners of the West Leigh building reached out to them. The space had been left empty by Sheep Hill Bistro, which closed last year after only a few months in business. Abernethy said they were apprehensive at first.

“I was like, ‘Man, there’s no way we could make this happen yet. We just got Cobra rolling.’ But then we went to talk to them to hear them out,” Abernethy said. “It just seemed like a really good investment we might be able to figure out, even with all the other things we have going on.”

Seeking a May opening

Hot For Pizza is leasing the roughly 2,200-square-foot space and is aiming for a May opening. Richmond Magazine first reported the plans for the concept.

Hot For Pizza’s pies will have a slightly thin-yet-chewy crust, a style Abernethy describes as a mix of Greek and New Haven, Connecticut styles.

“It curls up. It’s an in-between-style crust. It’s a little different from anything that’s being done here in town,” he said.

It’s part of Hot For Pizza’s plan to differentiate itself from the slew of other pizzerias and bars that have opened in Richmond in recent years. That follows the small ways they’ve helped Cobra Cabana stand out, such as getting Miller High Life on draft in lieu of Pabst Blue Ribbon, which is ubiquitous in Richmond bars.

The full menu is still in the works, but Abernethy said they’ll offer items in addition to pizza, including hot and grinder sandwiches. It’ll have seating for about 30, and offer delivery and takeout as well.

Editor’s Note: This story has been updated to reflect that Cobra Cabana and Hot For Pizza cofounder Rob Skotis is no longer involved in the businesses, according to the remaining ownership.

Mike Platania: Can you comment on why one partner left?

I’m not sure I should add to rumors, but they are all over social media. There were allegations of improper behavior by that partner. I personally have no knowledge of the truth or details.

Peddler on Pine closed and it was good (to me) so I wonder if this place will even open given the news surrounding ownership changes and the loss of the creative founder behind the restaurants.