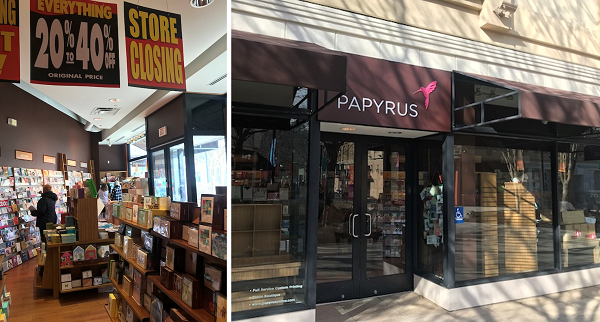 A local mall is losing another tenant, as the trend of mass store closures by national retailers continues.

Stationery and greeting card peddler Papyrus is closing all of its U.S. stores, including one in Stony Point Fashion Park.

Papyrus’ parent company Schurman Retail Group filed for Chapter 11 bankruptcy on Jan. 23 in Delaware. Schurman, founded in 1950 as a card wholesaler, also owns the brands Paper Destiny and American Greetings/Carlton Cards. In total, Schurman has over 250 stores nationwide, all of which will close.

The Stony Point store is expected to close by the end of January.

Schurman said about 1,100 employees will be affected by the closures.

The company had over 500 stores at its peak, and said in its bankruptcy filings that its rapid expansion following the 2008-2009 financial crisis left it overleveraged.

The company said it became “highly dependent on American Greetings,” which it acquired in 2009.

“In particular, (Schurman) relied on American Greetings for significant portions of the goods it sold under the Papyrus and Carlton Cards … names,” the filing states.

The announcement of the pending Papyrus’ closure arrived in the same week that news broke that Stony Point’s owner, Starwood Retail Partners, has fallen behind on its last two payments on the debt secured by the mall, which it bought in 2014.

Papyrus is the latest large-scale store closure from a national brand to wash ashore in Richmond. Last year Dressbarn, Victoria’s Secret and Charlotte Russe all closed some stores locally.

Victoria’s Secret’s Stony Point store was among those that closed, along with Virginia Center Commons. The lingerie brand still maintains its local stores at Short Pump Town Center and Chesterfield Towne Center.

Stony Point Fashion Park is the next endangered mall in the metro area. The owner has financial issues, the former Dick’s anchor is still vacant, and the phase 2 remodel isn’t happening.

The closing of Papyrus is a blip on the radar screen for this property.

This is yet another mall in the marketplace that needs to be re-developed.