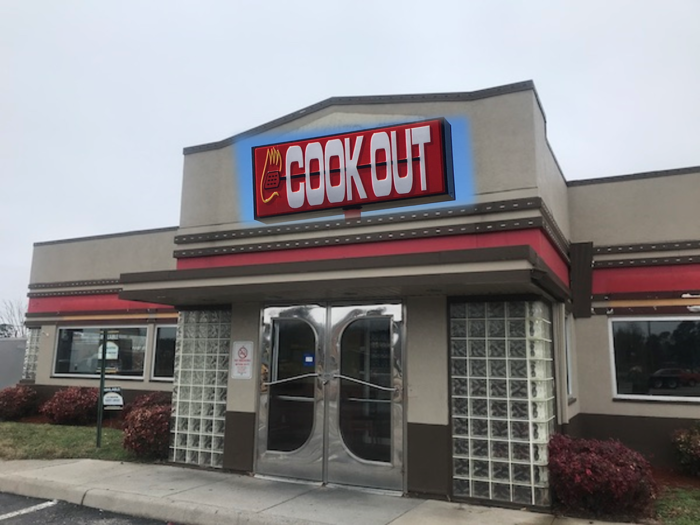 A vacant Denny’s is set to be razed to make way for a Cook Out. (Photo by Mike Platania; sign-in shot courtesy file)

North Carolina-based fast food chain Cook Out looks to be adding a new location to its tray in the Richmond market.

The company filed plans last month for a location at 12441 Redwater Creek Road in Chester, just off Interstate 95.

It would be Cook Out’s ninth store in the region and second in Chesterfield County, joining its spot at 8240 Midlothian Turnpike.

The plans include razing a vacant Denny’s restaurant building on the 0.8-acre property to make way for a 2,700-square-foot restaurant with a drive-thru.

Raleigh-based Commercial Site Design is listed in plans as the engineer and Greensboro-based Lindsey Architecture is the architect.

It’s unclear when work would start. Cook Out did not respond to requests for comment.

The 31-year-old chain is known for its burgers, milkshakes and large-portioned combo trays. It has more than 250 locations throughout the Southeast. It first arrived in Richmond in 2011 and went on a blitz of opening stores throughout the region, mostly in Chesterfield, Henrico and Hanover counties. It has one location in the city limits at 4802 W. Broad St. near Willow Lawn.