Another chunk of Arthur Ashe Boulevard has been snatched up by investors.

The site, which sits across the boulevard from The Diamond, was purchased by an entity tied to local real estate giant Thalhimer, according to city records.

It’s unclear from the records whether the company’s investment and development arm, Thalhimer Realty Partners, was the buyer or rather was part of the deal with other investors. 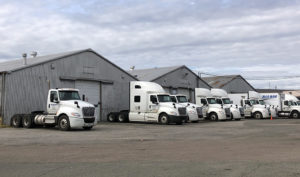 The property houses dozens of trucks leased out by Idealease, which continues to operate following the sale of the land. (Michael Schwartz)

The buyer was 3064 Arthur Ashe Blvd LLC, which shares the same address as Thalhimer’s HQ at 11100 W. Broad St. in Short Pump. The entity also is managed by TRP principal Jason Guillot.

Guillot and fellow TRP Principal Matt Raggi could not be reached for comment.

The seller of the site was Skeet2 Holdings LLC, which had owned the properties since paying $1.2 million for them in 2000. Idealease continues to operate on the property, which houses several buildings and dozens of big-rig trucks.

It marks the second deal Thalhimer has had a hand in across from the Diamond in recent weeks. TRP in late December purchased the Wesco Distribution site at 2902 N. Arthur Ashe Blvd. for $3.75 million.

The three deals give Thalhimer a grip on nearly 12 acres within the vicinity of the Diamond and of the Virginia ABC headquarters on Hermitage Road, which is targeted as the home of a potential new baseball stadium for the Flying Squirrels and VCU.

The new stadium would allow The Diamond to be put to rest and could anchor a long-talked about redevelopment of the surrounding and highly coveted 60 acres that the city currently owns.

Raggi from TRP said last month the firm is content to let the existing industrial tenants in its surrounding properties continue operating, while allowing the necessary city and state government wheels to turn toward a likely RFP of the entire Diamond site.

“If The Diamond and surrounding land gets redeveloped in the future, of course that will impact the longer-term development of the site and the larger size of the property will give us some flexibility on those development options if the time comes,” Raggi told BizSense following the Wesco deal.

Why do so now while the baseball stadium(???) plans are proceeding? May as well wait to see what happens.

because it would be better for the city as a whole. Parking properties undermines city progress

Charles, I agree if it were long term, but a private landowner is under no obligation to prop up the city coffers.. A premature plan of development may very well fail before it has had a chance to cover expenses. At least the current use allows for some tax revenue while they wait to see what happens with the stadium plans.

The lot next to Wawa (old Bills) has been a pile of dirt since Shenandoah Shutters moved to Southside. The building was demolished 5 years ago. this month. I’m assuming they just plan to hold the land and keep a lease going for a while until the Stadium project/Blvd redevelopment moves forward. AKA sometime maybe 2-3 Mayors from now.

My mistake. I read the previous post reference to “Parking” as in “vehicle storage” as opposed to “parking” as in “holding a place”. Thanks for the clarification.

Finally. I was wondering when this property would be redeveloped.