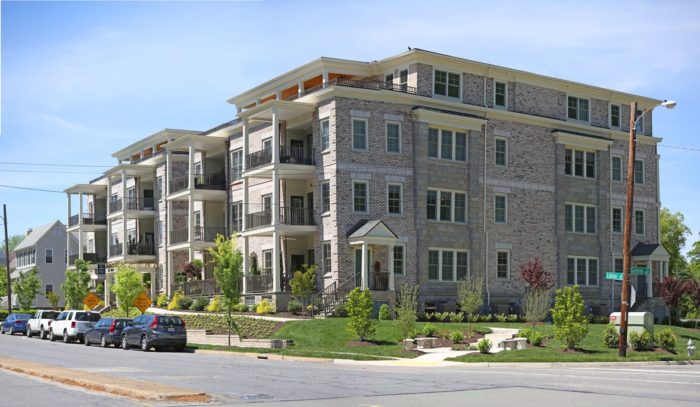 The Tiber condos at Libbie and Guthrie avenues. Posner’s penthouse is the top-floor unit closest to the corner. (Photos courtesy David Posner)

One of the principals behind a recent condo development in the Libbie and Grove area is putting his unlived-in penthouse unit on the market, while also continuing to invest in a particular block in Manchester.

David Posner, who helped developer John George finish The Tiber condos at Libbie and Guthrie avenues in 2017, is listing his top-floor condo – 514 Libbie Ave. unit 7 – with an asking price of $1.89 million.

Posner, a local businessman who stepped in to help revive the once-stalled project amid a falling out between George and his original partners, purchased the unit in early 2019 but never moved in. He said commitments in his personal life have led him to put the 3,500-square-foot unit – one of two top-floor penthouses – up for sale.

“I’ve had this unit now for more than a year, and I’ve been trying to decide whether I’m going to move into it or not,” said Posner, who has a residence on Lake Chesdin in Chesterfield County. 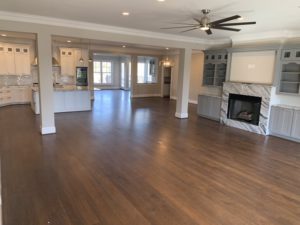 “I’m getting married in June, and we had considered the possibility of selling our houses in Chesterfield. I’ve got a daughter that still has one year of high school,” he said. “We made a decision that, right now, the time is just not good, and it’s silly for me sit on the darn thing for another year.”

At $1.89 million, the listing is the priciest in the area for a condo unit in the past five years, according to the Central Virginia Regional Multiple Listing Service.

Posner said his asking price is justified given The Tiber’s location and other investment in the area, such as the recent redevelopment of the former Westhampton Theater site and the underway conversion of the old Westhampton School site.

“Based on the economy and everything else that’s being built, I think it’s certainly a fair and justifiable asking price,” he said. 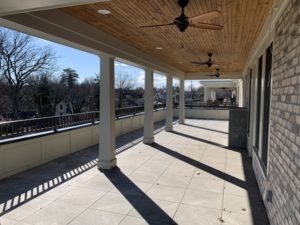 The top-floor unit has three terraces, including this one overlooking Libbie Avenue.

The listing is the only available unit at The Tiber, which Posner said is otherwise fully occupied. He said all of the main building’s 14 units have sold, as has a detached cottage unit at 5803 Guthrie Ave. that sold last September for $850,000.

The Tiber is among several residential projects that have added density in and around Libbie and Grove in recent years. In addition to the Chadwick on Grove and Westhampton on Grove, a group of developers recently fitted a cluster of four single-family homes on two cleared lots on Maple Avenue, just around the corner from The Tiber.

He now owns over a dozen properties on the block bound by Hull, Decatur, East 14th and East 13th streets.

“It’s a beautiful, 4,000-square-foot building with an adjacent empty lot on the corner. We’ve had some talks with larger restaurant groups, and some guys that want to go out on their own and do a brewery,” Posner said.

“It just makes it easier to own them and control them than to have somebody come in,” Posner said.

In total, Posner has spent over $1.5 million on properties on that block since the beginning of 2019, city property records show.

The Manchester Business District has been redeveloping for several years now, with the final touches being done on the 1300 block and the new work beginning on the 1400 and 1500 blocks. RJ Smith has done a beautiful job and has some new ideas coming.