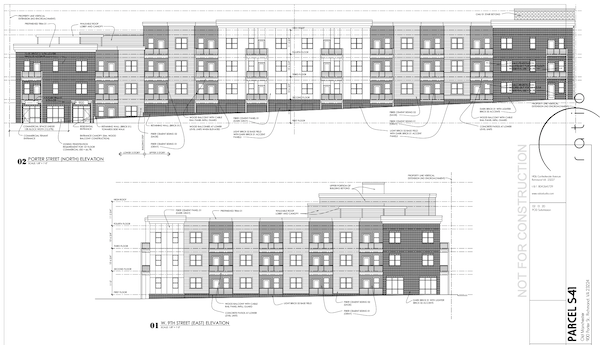 Dozens more apartments are in the works for Manchester as one of the neighborhood’s most prolific development firms plots its next project.

Miller, a longtime developer in the Manchester area, said the building will be L-shaped, with a 1,400-square-foot commercial space on the ground floor.

The unnamed project will total roughly 58,000 square feet across three stories on about an acre of land alongside Porter Street between Ninth and 10th streets.

The other half of the city block is occupied by nonprofit Tricycle Farms, which grows and sells produce on the site. Miller said the community garden will not be affected by the development.

“We’re only building on about half of the city block and we own all of it,” Miller said. “Our goal is to leave Tricycle there so they can continue to grow, teach and sell vegetables for the neighborhood and the city.” 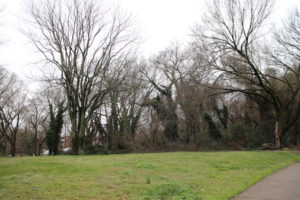 The 75-unit project will rise on a site covered mostly with trees and brush. (Photos by Mike Platania)

Urban Development bought the property, which totals 12 parcels, for $4.7 million in 2005, city property records show. The site is currently a grassy area and filled with brush and trees.

Of the 75 apartments, 70 will be one-bedroom units and five will be two bedrooms. Miller said they’ll all be market-rate, with amenities including a gym, rooftop deck and clubhouse.

Miller said he doesn’t have a tenant lined up for the commercial space, nor does he have a particular type of tenant in mind.

“It’d be ideal for a little market or convenience store or something like that, but I don’t know,” he said.

The project will have 78 surface parking spaces accessible via an overgrown alleyway that bisects the block between Porter and Bainbridge streets.

“We’re essentially extending the alley. It’s not there now, but it might’ve been about 100 years ago,” Miller said.

Horizon Construction Management is the general contractor on the project, Ratio is the architect and Gradient PC is the engineer. Miller declined to disclose the project cost. 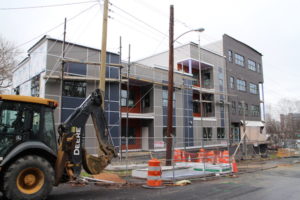 Work on a 19-unit condo project by Miller continues across the street from the future project on Porter Street.

Urban Development filed a plan of development with the city last week and is awaiting review. The site is zoned R-63 Multi-Family Residential Urban District, which accommodates the project.

“My hope, and I emphasize hope, is we can start construction this summer,” Miller said. “Buildout will be at least 12 to 14 months. We’ve got a lot of site work to do.“

The project adds to a busy workload for Miller and Gecker in the neighborhood. Across the street, at 901 Porter, is a 19-unit condo project they’re developing with Richmond Cohousing. Miller said that project’s coming along well, with 16 of the condos under contract.

Urban Development builds their apartments to last. and they manage them for longterm success. They rarely sell their properties but if you’d like purchase three of their small buildings, on Porter and Bainbridge, they are now available. Give me a call at 804 370 3677.

Manchester is the new Brooklyn.

At one of the real estate/development summits (I think over the winter) assessing the Richmond market for housing development, that was one of the comments from one of the industry leaders in attendance – referring to Manchester as Richmond’s Brooklyn.

Man, I thought developers would no longer be interested in Richmond…because Navy Hill.

Side news: Tricycle gardens are going away. EnRichmond is taking over their stewardship to ensure that gardens actually stay operating. Details at https://tricycleurbanag.org/.