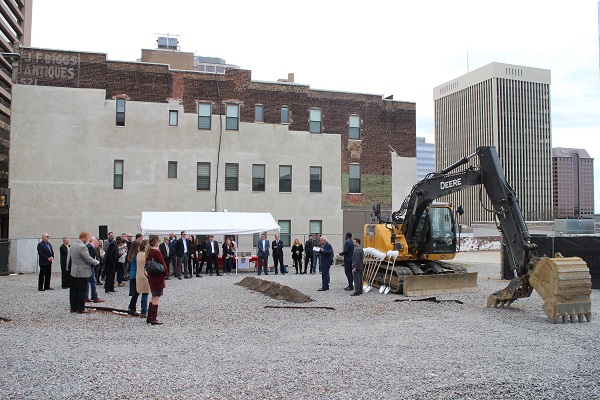 Attendees gathered for Wednesday’s ceremony on the site, next door to the century-old Centennial Apartments building along Main Street. (Photos by Jonathan Spiers)

If the first part of the project was a nod to the past, what’s building next door represents the future for a two-phase development in the heart of downtown.

Developers and city leaders converged Wednesday on the site of the future Centennial Terrace, a six-story mixed-use building set to rise beside the Centennial Apartments building at the southwest corner of Main and Sixth streets.

A groundbreaking ceremony signaled the start of construction for the 53-unit apartment building, which will include 2,100 square feet of street-level retail and ground-floor parking. 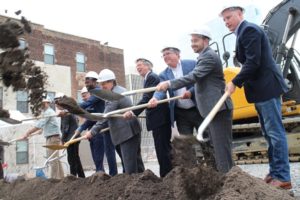 A ceremonial dirt-slinging marked the start of the construction.

The project is by Goodstein Development Corp., a New York-based firm that partnered with Richmond developer Guy Blundon’s CMB Development on the Centennial Apartments. That phase of the project, a rehab of a 1916 building, got underway in 2006, marking the centennial of the building’s construction – hence the project’s name.

While Blundon is not involved in Centennial Terrace, he was among those on hand for Wednesday’s ceremony, which also drew Mayor Levar Stoney and others involved in the project.

Blundon said he opted out of the second phase of Centennial because his hands are full with other projects, such as his Shiplock Apartments near the foot of Libby Hill, and the 344-unit River’s Edge towers he’s developing with Mark Purcell in Manchester. He said the Centennial Apartments building has performed well, with both of its street-level restaurant spaces filled.

Leading Centennial Terrace are Goodstein CEO Ivan Goodstein, his son Jake Goodstein and COO Leonard Bayer, who gave remarks during the ceremony along with Stoney. 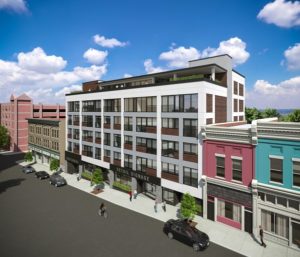 The Centennial Apartments building at the corner of Main and Sixth streets.

Totaling 47,800 square feet, the building will consist primarily of studios and one-bedroom apartments, with floor plans ranging from about 470 to 1,020 square feet and rents starting around $1,150 a month. The apartments will include door access by phone and other so-called “smart building” technologies.

The top floor will include a clubhouse with fitness room that connect to a rooftop terrace overlooking Main Street. Those amenities will be available to residents of Centennial Apartments as well.

Describing the setup, Bayer said in his remarks, “So you get a little sweat on, a little aerobics in the gym; walk a couple steps, open the door into the social lounge; grab a water, grab a beer, an orange juice or tea; walk a couple steps outside on the roof deck, and just chillax.” 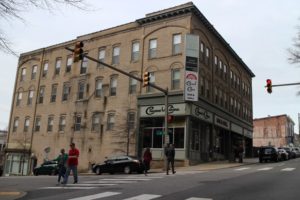 The Centennial Apartments building at the corner of Main and Sixth streets.

Bayer said the reductions resulted from having to move the building’s generator from the roof to the ground level, and due to adjustments in the design of the parking garage, which will total 25 spaces.

While most units will feature one-bedroom floor plans, Bayer said the building will include a two-bedroom penthouse unit on the top floor.

Bayer would not disclose a cost for the project, which is being financed by TowneBank and Potomac Business Services, a Maryland-based lending agency. City records show Goodstein acquired the property at 513 E. Main St. through an LLC in 2016 but do not reflect a price. The latest city assessment valued the 0.2-acre property at $486,000.

Branch Builds is the contractor on the project, and Walter Parks Architects designed the building, which will be managed by Dodson Property Management. Construction is slated to start next week, and the building is scheduled to open in spring 2021. 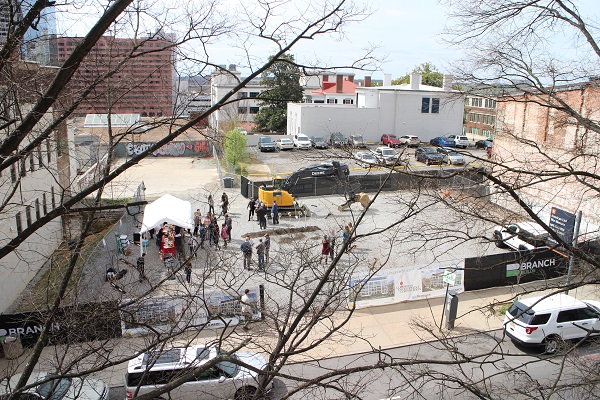 The site at 513 E. Main St. is situated between two buildings.