City meetings cancelled due to COVID-19

City and county officials on Friday declared a local state of emergency in response to the COVID-19 novel coronavirus. All city public meetings scheduled through March 22 are cancelled.

Area public schools will close for two weeks starting March 16. City library and parks and recreation programs were being cancelled, and the city’s public utilities department was suspending all disconnections of water and wastewater service for nonpayment.

Chesterfield County Administrator Joe Casey presented the proposed budget for fiscal year 2021. The $1.52 billion plan, up from this year’s $1.43 billion budget, maintains the current real estate tax rate of 95 cents per $100 of valuation and includes a $773.2 million general fund and a 2 percent merit-based raise for county employees.

Budget highlights include laying a framework for a $600 million bond referendum to address capital needs over the next decade, and putting resources in place to begin work on a fourth water source for the county.

A public hearing on the budget is scheduled March 25, and supervisors will vote on the document April 8. The full document, supporting materials and a schedule of community meetings on the budget can be viewed here.

Henrico County Manager John Vithoulkas presented a $1.4 billion proposal, an increase of 5.5 percent from the current year’s plan. The proposal retains the current real estate tax rate of 87 cents per $100 of valuation and includes a general fund totaling $962.5 million, an increase of 4.8 percent.

The Henrico plan also provides $142.7 million for capital projects in fiscal year 2021, including an addition to Hungary Creek Middle School, a new elementary school near the River Mill development and a new South Station for police.

A public hearing on the budget is scheduled April 14, and the board would vote on the document April 28. The full document and a schedule of budget work sessions can be found here.

Monday update: The below meeting has been cancelled. Items from the agenda will be taken up at the commission’s April 21 meeting.

The commission will give a second look at Courthouse Landing, a mixed-use development with a hotel, 400,000 square feet of retail and office space, and hundreds of new homes planned for 122 acres southeast of the Route 288-Iron Bridge Road interchange.

The commission gave the $165 million development a thumbs-down in December, and supervisors in January gave the developers more time to address concerns about projected traffic and school impacts, and the site’s proximity to Chesterfield County Airport.

The developers – Florida-based Dunphy Properties and Atlanta-based Shuler Properties – have revised their plan to include additional road improvements, and county planning and transportation staff recommend approval.

Chesterfield supervisors last week approved a request from Emerson Cos. to rezone 21 acres at 120 Walton Park Road for a 345-unit “two-over-two”-style condo development. The undeveloped site is just east of Midlothian Middle School off Midlothian Turnpike. Cosby Village LLC seeks rezoning for a commercial development on 20 acres between Hull Street and Cosby roads.

Richmond City Council last week deferred a vote on its proposed rules for short-term residential rentals to its April 13 meeting. It had previously deferred a vote when the rules came before council in February.

The city’s policy would require anyone looking to rent out a property for less than 30 days at a time to obtain a biennial permit, at a cost of $300. It would not impose a transient occupancy tax on rentals, though the latest version of the proposal notes that transient occupancy and other local taxes will be considered at a later date, potentially taking effect Jan. 1, 2021. 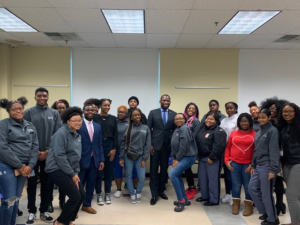 Richmond’s Mayor’s Youth Academy is recruiting city employers who can hire youths for a six-week summer work experience as part of its summer employment program.