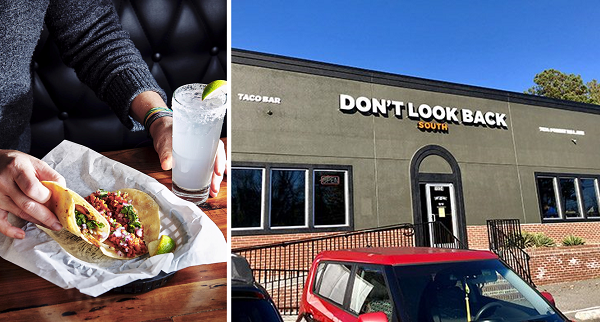 Don’t Look Back temporarily closed both its locations due to the coronavirus. It has launched a membership program to generate money for laid-off employees. (BizSense file and Don’t Look Back photos)

Don’t Look Back will have a quiet birthday this year.

The taco joint turned 8 years old Tuesday and managing partner Hamooda Shami would have liked to have thrown a celebration. But the restaurant shut down its two locations in Scott’s Addition and Forest Hill, and laid off its 65 employees March 16 in response to the coronavirus outbreak.

So while there isn’t much to celebrate, the restaurant hopes it’ll be able to one day toast the success of what it sees as a novel idea to combat the shutdown, drive revenue in the interim and help its workers.

The Don’t Look Back Club, a membership program for the restaurant, launched on Friday. For $25, a membership gets you a 10% discount card good for a year, a shot glass and tote bag. For $40, members get all that plus a T-shirt designed by local artist James Callahan of Barf Comics. Response has been good so far, Shami said.

While some restaurants have turned to curbside pickup, gift cards and crowdfunding campaigns, Don’t Look Back opted to close rather than operate in a limited fashion because it couldn’t guarantee customers or employees wouldn’t get sick.

Gift cards weren’t appealing because that would mean a period of notably reduced cash flow when the restaurant reopens and many customers pay via gift cards. As multiple industries and workers are feeling the financial sting of coronavirus, a donation drive through GoFundMe didn’t seem tenable, either, Shami said.

Shami devised the membership program as a way to raise money for laid-off staff. Workers will get about 80% of the total membership sales, with the rest going to the merchandise and other expenses associated with the membership program. The plan is to write checks to former workers based on hours worked this year once the restaurant reopens. Workers will get their checks when the restaurant reopens so as to not jeopardize unemployment benefits. Members won’t get their merchandise and discount cards until Don’t Look Back reopens.

An effort to generate money for the workers was preferable to dipping into the restaurant’s savings, which Shami is relying on to keep Don’t Look Back alive until it can reopen.

The program had raised about $11,000 by Monday afternoon. There have been about 300 orders for memberships, though it’s unclear exactly how many memberships that translated into given that some orders were for multiple packages, Shami said.

“It’s going to be hard, but this has been so uplifting,” he said.

DLB has the best tacos in Richmond and it pains me to see them struggling in this environment. This restaurant has literally risen from the ashes of a kitchen fire to expand into two locations. I’m joining the DLB club and hope others will as well…