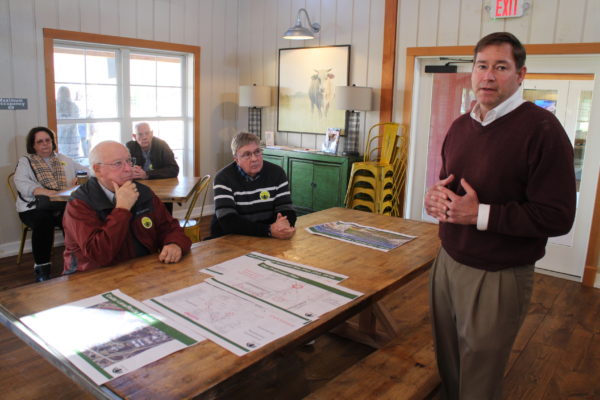 A dispute over plans for an industrial park in Hanover has been resolved, as neighboring residents concerned about the site’s truck traffic have withdrawn their appeal after reaching a formal agreement with the developer.

Planning Director David Maloney reported to county supervisors Wednesday that the petition challenging an approved site plan for Cardinal Commerce Center, previously called Cedar Lane Industrial Park, was being withdrawn in light of an agreement between developer Scannell Properties and the homeowners’ association for the neighboring Chickahominy Falls subdivision. 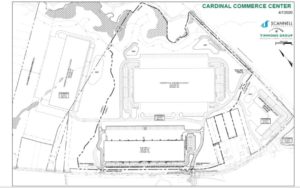 The latest site plan for the project shows the access points off Route 1 to the right and off Cedar Lane at the bottom. (Hanover County)

The association for the primarily 55-and-up residential development had filed the appeal in December, contending that the site plan was supposed to have included a truck entrance off Route 1 in addition to access points along Cedar Lane, which runs between the site and the neighborhood. The approved plan called for just one access, directly across the two-lane road from the neighborhood’s main entrance.

The petition prompted Indianapolis-based Scannell to amend its plan to include two more entrances: a “right-in, right-out” access off Route 1, and a second access along Cedar Lane farther west. In light of those revisions and ongoing discussions between parties involved, supervisors held off a decision on the appeal until this month’s board meeting.

As a result of the developments, Maloney told the board that they no longer needed to take action on the matter.

“With that agreement, we have received notification from the Chickahominy Falls Association’s attorney just this morning that the appeal has been formally withdrawn,” Maloney told the board Wednesday. 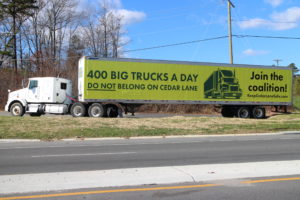 The Cedar Lane Coalition group had placed a tractor-trailer with a sign at the intersection of Cedar Lane and Route 1 to raise awareness of their concerns. (BizSense file photo)

“I am happy to inform you all that this matter has been resolved to the satisfaction of all parties,” he said, adding that the agreement requires that the Route 1 access be constructed prior to a certificate-of-occupancy award for the first building. It also required the name change and calls for signage throughout the park directing truck traffic to the Route 1 entrance.

An updated plan reflecting the changes has since been submitted and filed with the county, Maloney said.

“On behalf of the county, I think we all appreciate the efforts of Scannell to address the concerns expressed by the citizens through the appeal of the site plan approval,” he said. 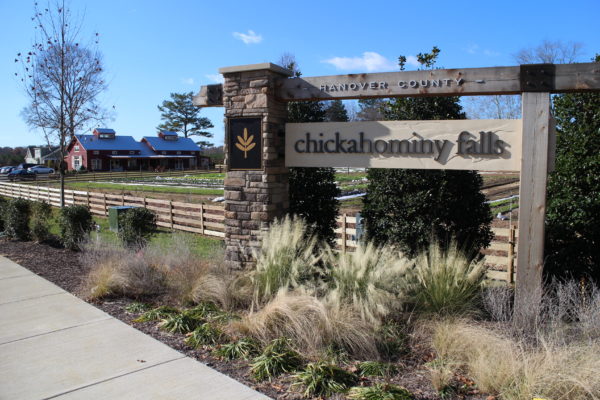 Ashland District Supervisor Faye Prichard credited the efforts of Susan Dibble, the new South Anna supervisor whose district includes the properties in question, and who Prichard said was integral to the negotiations.

Noting Dibble took her seat on the board at the time the petition was filed, Prichard said, “She walked into this project determined to be a problem-solver, determined to work with both sides of this, and I think we have a resolution because she really stuck her neck out in her first month on the board. I personally want to say thank you for doing that.”

The 118-acre development is planned to consist of three distribution warehouses. The updated site plan, drafted by Richmond-based Timmons Group, shows a 260,000-square-foot building fronting Cedar Lane with a 25-foot buffer and parking in between.

The plan shows space for a future second building behind it totaling 420,000 square feet, and a site for a third building totaling 267,000 square feet that would be built to the west in a second development phase.

“There were compromises on all sides, and I sincerely do appreciate everybody’s hard work,” Dibble said. “I believe this was really a community effort and positively does reflect how our government officials, our developers, our property owners and our citizens should and can work together.”

Glover, whose Cornerstone Homes is developing Chickahominy Falls, said in a statement that he was satisfied with the result. Glover submitted the petition on behalf of the association, working with Williams Mullen attorney William Bayliss, who wrote up the document. Scannell was represented locally by McGuireWoods attorney Ann Neil Cosby.

“I am pleased with all that was accomplished over these last four months,” Glover said in an email. “Sue Dibble, who just started on the Hanover Board for Supervisors in January, jumped right in and was tremendous.

“Ms. Dibble and Planning Director Dave Maloney worked diligently to improve the truck traffic patterns and meet our citizens’ concerns. I am confident that as future phases of this commercial park project are developed, we can all continue to work together to ensure safety on Cedar Lane Road and the vibrancy of this community and our farm.”

Planned for 400 homes on 150 acres, Chickahominy Falls started sales in 2018 and has been taking shape with dozens of homes surrounding a central barn and community farm that anchors the so-called “agri-community.” As of January, Glover said he had built as many as 70 homes, with 100 people moved in and 150 more waiting to move in.