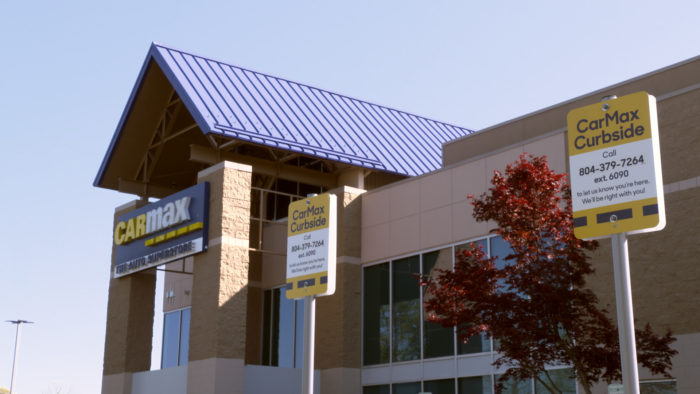 CarMax rolled out a curbside car pickup program in which customers buy cars online and retrieve them in a contact-free process. (Courtesy of CarMax)

Locally based used car giant CarMax continues to respond to the coronavirus downturn.

The Goochland-based Fortune 500 company on Tuesday announced the introduction of contactless curbside car pickup. The move comes shortly after the company, which has closed or instituted limited operations at almost half its 225 stores, announced the furloughs of more than 15,000 employees.

The curbside service is available at most open stores nationwide, including the company’s two Richmond-area locations, CarMax spokeswoman Lindsey Duke said in an email.

The curbside pickup program allows customers to buy cars in a way that jells with the social-distancing guidelines prompted by the coronavirus pandemic, which has caused disruptions across the economy as government officials order businesses to limit operations and people to stay indoors. CarMax continues to offer home-delivery services as well.

Under the curbside program, customers don’t go inside stores. They complete most of the car-buying process online, where they select a vehicle, get pre-approved for financing and get a trade-in offer. Customers can take a solo test drive. CarMax also announced an extension on limited warranties, which went into effect March 16 and apply to cars purchased on or after Dec. 17. The company also is providing payment assistance and waiving late fees for payments due in March and April. 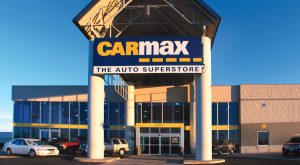 CarMax is set to lay off 15,500 employees this weekend. About 450 of them are in Virginia.

The program comes just as CarMax prepares to furlough 15,500 associates nationwide on Saturday. About 450 Virginians are among those who will be furloughed. The furloughs will be in effect for an unspecified period of time. The majority of those furloughed work at already-closed stores, according to a company announcement last week.

The furloughs in Virginia represent about 17% of the company’s 2,600 associates in the state. CarMax didn’t announce any changes to employment for employees at its corporate HQ in West Creek, though an unspecified number of contractors who work on the corporate level have been laid off, CarMax spokeswoman Jen Bartusiak said in an email last week.

All of Virginia’s 10 CarMax stores remain open, according to its website.

Before furloughs take effect, the company is providing affected workers with transition pay. CarMax will also cover the current cost of the employee share of the company’s medical plan, as well as the employer share, for affected associates until further notice.

In its announcement, CarMax said future decisions about furloughs depend on new government orders and how the pandemic affects economic conditions in the future.

“I believe that these steps will help our company withstand the current environment and successfully emerge from these difficult times,” Bill Nash, CarMax president and CEO, said in the release.

Nash received a salary of $1.1 million in fiscal year 2019, according to CarMax’s proxy statement for that year. Bartusiak didn’t respond to a question regarding how the company will utilize the portion of Nash’s salary he will forgo.

Besides furloughs, the company announced reduced marketing spending, a hiring freeze and a stop on store expansions and remodels among other measures last week.