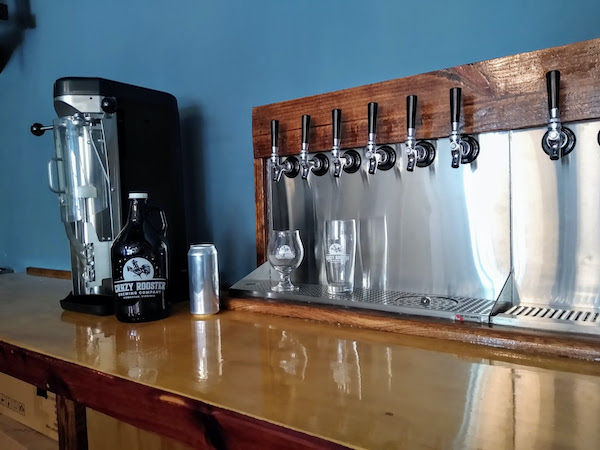 Jason Miller and Tim Torrez expected their brewery’s grand opening to include pints being passed across a bar, not being handed through car windows.

Such is life as the region’s newest beer maker in the age of coronavirus.

Miller and Torrez opened the Grateful Dead-inspired Crazy Rooster Brewing Co. over the weekend at 1560 Oakbridge Drive in Powhatan, offering takeout only.

Construction on the 5,000-square-foot space, which is part of a newly built 20,000-square-foot building just off State Route 60, started wrapping up right as the coronavirus pandemic hit the U.S. 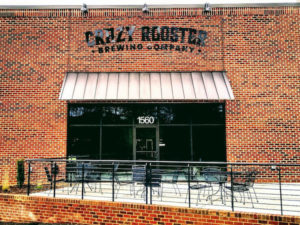 The brewery is the second in Powhatan, and 38th in the region.

They had been planning to rely on taproom sales as their main revenue driver, using the brewery’s outdoor patio area and live music stage as a draw. But once public health requirements prohibited people from gathering in large groups, Miller said they scrambled to get 16-ounce and crowler cans, and the necessary equipment to can onsite, which every local brewery has rushed to do in recent weeks.

Brewer Brian Knight, who formerly brewed at Strangeways Brewing and Legend Brewing Co., started brewing for Crazy Rooster in February, and the brewery is now open with six beers available: two IPAs, an amber ale, a wheat ale, a saison and an oatmeal stout named Crowin’ Midnight, which along with the brewery name, comes from lyrics in the Grateful Dead’s “The Music Never Stopped.”

Miller said they’ll likely start brewing some lagers next, since that variant takes longer to brew.

Miller said they’re at a competitive disadvantage by not being able to bring people into the tasting room, but added they’ve done well to keep locals posted throughout the buildout. 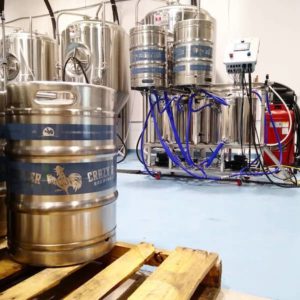 With 12 available taps, Crazy Rooster was anticipating to rely on taproom sales upon opening.

“It’s kind of scary – everybody else already has their beers and operations in place. They have a customer base who has familiarity with their beers. We’re in a position where people are going to have to buy our beers blind online without being able to get a little taster,” Miller said.

“But we definitely have a following of folks who are excited about this, despite never having the beers before.”

Torrez and Miller met over 20 years ago while working together at an engineering firm. Miller, a longtime homebrewer and Deadhead, cooked up the idea to start a brewery in late 2016 while considering a career change. Miller’s now working full time at the brewery, while Torrez continues to work full time in engineering.

Crazy Rooster will open the tasting room once allowed, Miller said. Until then, its beers will just be going out the front door in packaging. 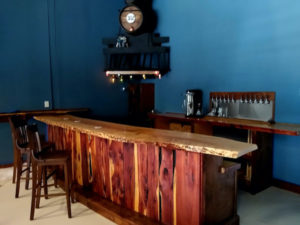 Its tasting room and bar will open once public health guidelines allow for it.

“It’s been stressful because at the end of the day we need to start generating some revenue,” Miller said, adding that they put in under $1 million into the venture, financed with a loan from Village Bank and some personal investment.

“We’ve been spending money for quite some time now and that’s been taking a toll on us. We’re excited to start selling some beer, and we hope everybody likes what we’re putting out. We’re really proud of the beer,” he said.

Crazy Rooster is the 38th brewery in the Richmond region, and second in Powhatan, joining Fine Creek Brewing Co., which opened in 2017.