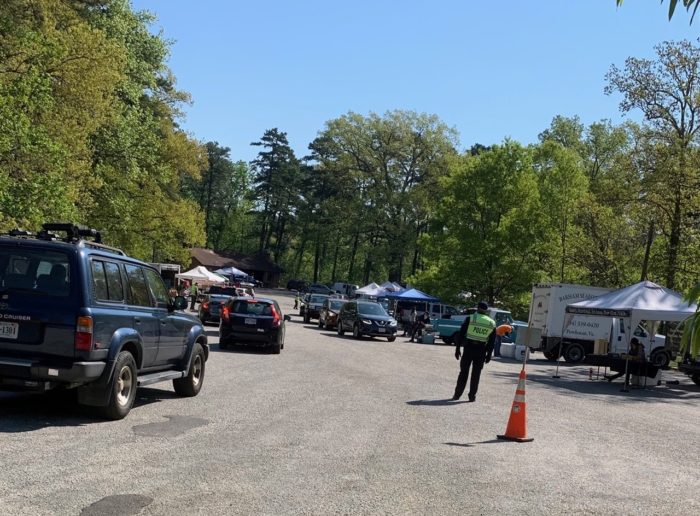 Editor’s note: This story has been updated to add in comments received after publication from Forest Hill Neighborhood Association President Whit Clements.

A long-running Southside farmers market is moving across the river to a new location.

South of the James Market will set up in Bryan Park beginning this Saturday, leaving behind its former spot at Forest Hill Park – at least for the time being.

The move comes in response to concerns about the coronavirus pandemic and amid “tremendous pressure” put on the city government by Whit Clements, president of the Forest Hill Neighborhood Association, and Fourth District Councilwoman Kristen Larson.

That’s according to a message sent by GrowRVA, the market’s organizer, to vendors on Monday and provided to Richmond BizSense.

The message to vendors noted Clements and Larson suggested use of a high school parking lot but that was determined to be infeasible, and Bryan Park was hit on as an alternative. It’s unclear whether Bryan Park will be the new permanent location for the market, which has been in operation since 2007.

Karen Grisevich, founder and owner of GrowRVA, referred largely to the message sent to vendors when reached for comment, other than to say in an email to BizSense, “We are a small business that has been affected financially also.

“I do not know what the future holds,” she said. “Our goal is to provide safe, healthy food access to the people of Richmond. We feel very responsible to our farmers and their families.”

Clements, in an email to BizSense Thursday morning, said the decision to move the market was made by the City of Richmond and suggested that the move would likely be temporary while the pandemic plays out.

“Covid-19 has been a disruptive factor for the lives of all and for the market, the FHNA looks forward to getting back to normal and hopes for the quick return of the South of the James Farmers Market back to operating in Forest Hill Park as soon as possible,” Clements said. “We urge South of the James patrons to go out Saturday to support the vendors at their temporary location in Bryan Park.

The market already had to rethink its operations during the pandemic, kicking off a drive-thru service in March. Last Saturday, the market had 815 cars participate in the drive-thru portion of the market, according to the GrowRVA message to vendors. There also were about 300 walk-up customers, with the market requiring social distancing measures. The drive-thru service requires customers to preorder their goods. Currently that’s handled between vendors and customers, though the market is working on an online system it hopes to have running later this month.

For Smith, about 40 percent of his sales at South of the James markets come through new customers who happen to stumble across his stall. That kind of customer is rarer these days, and business has been mostly with existing customers. 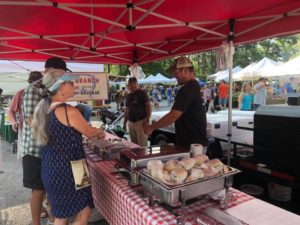 Smith, who plans to be at South of the James’ first market at Bryan Park this week, was last a vendor at the market in mid-April. He said he felt like the number of vendors was down compared to pre-pandemic markets, but was impressed with the number of cars that showed up for the drive-thru service. He found customers tended to buy in bulk.

That’s some consolation given the recent disruptions to business. Smith voiced frustration that farmers markets seemed to get the worst of government orders compared to grocery stores.

Smith has been participating in South of the James for about nine years, and has been selling at farmers markets for 11 years. There’s been a trend by markets away from walkup sales to online preorders due to the virus. With preorders, vendors can find themselves spending a big chunk of the workday just making sure orders are fulfilled ahead of time. Nevertheless, Smith predicted preordering would stick around at farmers markets after the pandemic.

“It’s been different than anything I’ve experienced,” Smith said. “This is a huge transition and it digs into production time.”

Massive respect to Karen and the many vendors and farmers serving our community throughout the pandemic. They have a tight, solid, safe, operation allowing folks to safely preorder, remain in vehicle, and pick up goods. I recommend it. As far as the Forest Hill Neighnorhood Association. What a bunch of bougie folks. This was a wonderful ammenity offered in their backyard, servicing their very own neighborhood. The process of pick up involved no one getting out of their vehicles, vendors wearing PPE, and advamced ordering only. It is absolutely absurd that they would object to the Farmer’s Market being there… Read more »

imagine, if you will, 800+ vehicles backing up and winding thru your community: the honking, the exhaust , the inability to get out of your own parking spot. And then, the exposure to the virus from around the city. Those cars are not likely your Forest Hill neighbor’s.
I get it.

Bruce;
Something tells me you’d be OK with noise, pollution , and exposure to strangers if it involved a 10 story office building.
Multi million dollar construction projects run by out of town corporations, funded by tax credits, jackhammers 7 days a week is good?
People waiting in cars to pick up local produce, on day a week, is bad?

Imagine, if you will, not all 800 vehicles show up at the same time and there are probably that many that show up on a normal market day. People are not getting out of their vehicles and sneezing and coughing on local residents so there is not chance of the virus spreading from such activity (unless you go down and lick the parking lot afterward). The park has a substantial amount of infrastructure for lines of cars to wend through within the park. Many of the customers of the market come from surrounding neighborhoods such as Westover Hill and Woodland… Read more »

Some guy didn’t like the little people blocking his parking space and had the clout to overrule the wants,needs, and desires of several thousand other people who wanted to use a tax payer funded park for small business activity on weekends.

What do the Lakeside Farmers Market folks think about this move?

Lakeside is Henrico County. Bryan Park is in city. Hermitage Road does not change to Lakeside Avenue until you pass the park and cross the border. It is confusing to have the two jurisdictions conflated.

North Belkevue would be a more appropriate name for park’s location in city.