Unexpected, unsolicited offers and fallout from the pandemic has landed a Manchester multifamily project on the back burner.

Work is not expected to begin any time soon on RiverHaus, a $40 million project to include 23 condos and 130 apartments just south of the Lee Bridge at 700 Cowardin Ave.

Prior to the pandemic, Brickhaus principal Andrew Brickman said they were actually prepared to sell the land to another developer earlier this year.

“It was under contract, and I believe because of the pandemic the buyer was unable to (close),” Brickman said. “When the world collapsed with the pandemic, that created a lot of issues relative to the capital markets.” 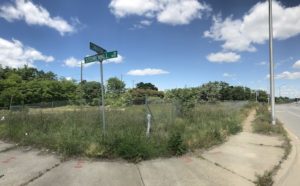 Work has yet to start on RiverHaus, and likely won’t any time soon. (Mike Platania)

“We are entertaining offers. We’re not actively marketing it right now,” he said. “We just wanted to focus on some larger projects.”

It marks the latest chapter in the back-and-forth history of the Cowardin site. Local developer Jeremy Connell previously was under contract to purchase the land from Northwood Ravin, the North Carolina firm that sold it to Brickhaus. While Connell was pursuing the land, he and Northwood Ravin had it rezoned to RF-2 Riverfront District, which allows for up to 13 stories. Connell’s contract ultimately transferred to Brickhaus.

“We’re looking at other opportunities in Richmond, but again, we’re pretty busy in Napa,” Brickman said. “We’re still designed for 23 townhomes and 130 apartments, and we still love the site.”

Meanwhile on the eastern side of the Lee Bridge, work continues on Riverview Apartments, a 270-unit townhome and apartment project by Alabama-based LIV Development.

Poor little lot…City (my old office) helped with the sale of the small triangular lot on Riverside back in 2005 that is part of the land included in this development. This place has had the worst luck…sold and then the Great Recession, developer went under, then zoning challenges, and now a pandemic. Oh well one day something will go up!

It’s a great site and sceams out for a classy residential highrise. The views from it would be some of the best in Richmond, and the location, in the context of modern-day Richmond and what people are looking for, is superb.. As a neighbor in nearby Woodland Heights I hope we don’t ultimately end up with another three or four story wood frame apartment building (which has been proposed more than once). That would be a failure of imagination and not the highest and best use for this property.

Brickhaus Partners is the real deal. Research some of the other projects that they have completed and you’ll understand why they should be more than welcome to little ole’ Richmond, Virginia. I sincerely hope they keep the property and develop it themselves.